A couple of years ago I wrote a post about loving your home. I even made a printable :) I posted it around Valentine's Day and since that is happening this week it has made me think about those posts, and my house.

I have never shared the story of how we came to have this house. I am not sure why. I guess the focus has always been how I have fixed it up.  Plus, you know when people say "Oh, it's a long story"? Well, this really is a long story. I didn't know how to condense it down to one blog post. I think I will do a two part series because it is one of the most special experiences I have ever had and I feel like it is time to share it with you.

We were living in Las Vegas, Nevada and my husband was working on his bachelor's degree in architecture. He took longer than usual because he was also working full time. I had two tiny kids at home. I would occasionally do odd jobs to help with the income like building things and painting rooms for people. But mostly I was a stay at home mom rockin' the sweat pants and getting spit up on.

To say things were tight financially is an understatement. But we were happy and comfortable with our circumstances knowing it wouldn't be that way forever. We had a plan. We were going to get an awesome job after Shane graduated, save our little guts outs, and when we had a huge nest egg in savings we would buy our first house. We were both terrified to buy a house so it was okay that it seemed like a long distance in the future. We felt comfortable waiting.

One day my sister called and said she was moving. She wanted me to hop on some websites and tell her what I thought of the houses she had found. After looking at her choices, I had this strong feeling of curiosity come over me and I really wanted to see how much homes were selling for in my home town. I typed in the city and started scrolling through all the homes. Scroll, scroll, scroll......

I came to a house and I had a physical and emotional reaction that happened so quickly it startled me. I had chills and I cried. I had the STRONGEST feeling that it was MY house. I sat there confused for I am not sure how long.

I didn't want a house. I was on a 5-10 year plan. I wasn't ready. Even the thought of owning a home scared the crap out of me.

Now I have to rewind a bit to my childhood. Pretend, like in the movies, that the camera slowly zoomed into my face and then it faded to a hazy dreamlike scene indicating the past. I was an odd child. I liked to build things, look through Better Homes and Gardens, I kept a journal of what my future house and yard would look like, and I loved looking at other people's houses. We are talking like 5 years old on up. I wanted to live in a "grandma" house. I called them that because all the people that lived in these type of homes were grandmas. Basically they were small brick homes with a rounded front door, built ins, and unique quirks. I LOVED them.

Flash back to when I was in Vegas and staring at the computer screen.... The house I had the reaction to was this exact type of house.

I was unsettled all day. I wasn't sure what to think. I started to doubt what had happened and I down played it saying that the only reason I had that reaction was because it looked like what I wanted. I decided to do an experiment. I would show the website to my husband when he got home and watch as he scrolled and see if anything happened.

He got home and I nonchalantly said "Hey, my sister is moving again and I was looking at houses with her today. I looked up homes in my home town for kicks and giggles. Come check it out." He came over started looking. We had dial up internet. It was painfully slow and I was dying. Scroll, scroll, scroll.....

Guess what? Shane had the same reaction that I did. He was silent. His eyes teared up. He looked at me and said "I think this is our house."

So now what? Here were are poor, young, still in college, with two little kids. We were living off Mac and Cheese and Ramen and barely paying our bills. We had taken out student loans to survive and had one crappy car. Who would give us a loan? How would we pay for it? Wouldn't we have to move since the house is in another state? What about school? Did this mean something was going to happen that required us to be back home?

I honestly felt like I was stopped at a red light and the Holy Ghost was telling me to "GO!". It didn't make sense to me. I was torn. The spiritual side of me was telling me that if it was meant to be, a way would be provided. But the logical part of me was still pointing out how impossible it was.

I decided to call the real estate agent's number that was on the website and ask about the house. It didn't hurt to ask, right? He told me it was a short sale house and that is why the house price was not listed. He told me that the short sale time frame was almost up. He also explained what a short sale was since I was a real estate newbie.We called my mom because not only is she my mom but she is also a manager at our bank and we joke she is our own personal banker. I told her what had happened and asked what the next step should be. Should we put an offer on the house first? Should we apply for a loan and then hope it was still available?

I could tell she was having the same struggle I was having. On one hand (as my mom and as my banker) she wanted to say it wasn't a good time to be buying a house. She wanted to say that we could never in a million years make it work. But on the other hand (as a very spiritual person) she wanted to trust in the prompting we had been given. So she held her tongue and just gave me advice on how to proceed. I never did show her a picture of the house.

Well, we made lots of calls and filled out lots of paperwork over the next month. We hadn't been approved or anything but we had the ball rolling so I called back the agent. He told me the house had been sold. SOLD. 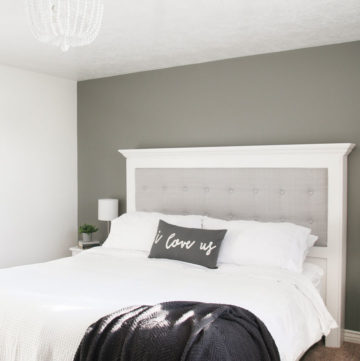