Are you ready? Are you ready for the best before and afters ever? I wish the before pictures were of a higher quality but they were printed off from an email onto regular paper with a crappy cheap printer and then scanned. But you can get the general idea.

First stop, the living room. It is the first room you enter through the front door. It had forest green carpet and floral curtains. If you watched our 80s and 90s edition of He Said She Said then you know why these were the first things to go.

All the cable wires were entering the house through a hole drilled in the window frame. We fixed that when we updated the electrical in the house. But other than painting and refinishing the wood floors that were under the carpet, I didn't do a ton in here. 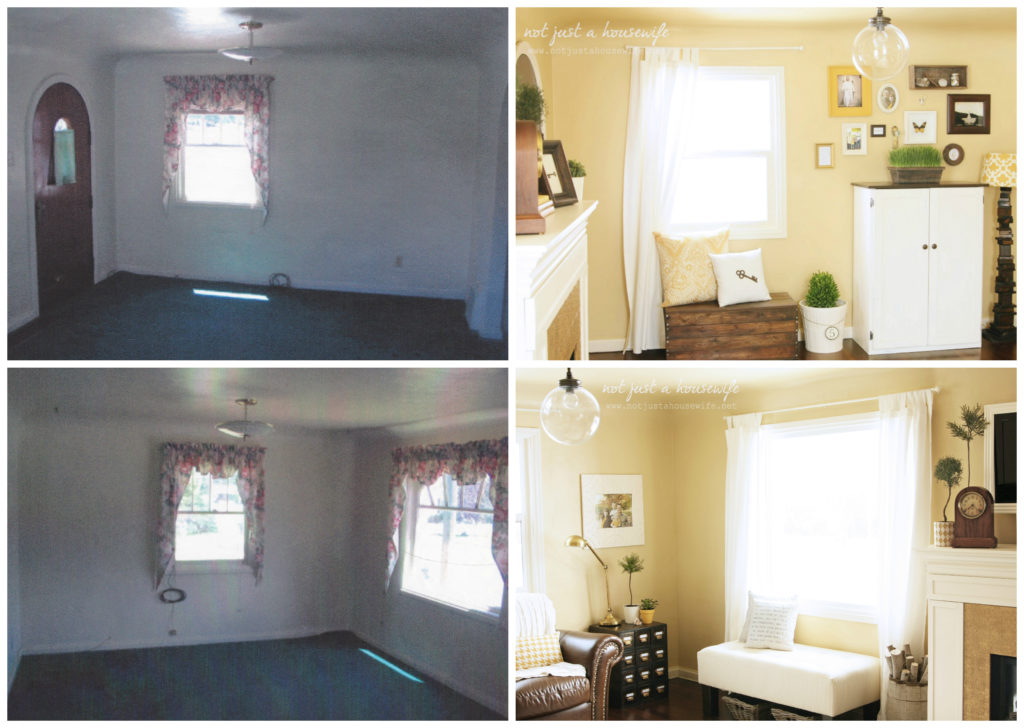 Ahhhh, the bathroom. It is the bane of my existence right now since it is partially torn apart due to a leak. Yes, I know. You are thinking "Hasn't it been torn apart since last March?" Yes, yes it has. I am waiting to win the lottery or get a huge inheritance from a mysterious relative.

The huge space ship light came down and was replaced. We added a light above the mirror as well. I ripped down the wall paper and painted. The counter top got replaced and I stained the bead board.The mirror got a makeover too.

I have always hated the pink/peach and blue-sih marble tile on the floor. And since we have to replace the original 75+ year old bath tub (that is NOT AT ALL close to the standard size of tubs today) we have to replace the tile. It had a good run. But it needs to go away. I am hoping for a claw foot tub. I think it would look so charming in the rounded nook.

The kitchen.... my teeny tiny kitchen. It is 9 foot by 9 foot and then you add in cabinets and appliances and you barely have room for a couple of people. The before picture here didn't have a fridge so it looks a little bigger.

We have probably done the most in our kitchen. The flooring was replaced, the cabinets painted, new appliances, we added a dishwasher under the sink, added new cabinets next to the fridge, got new counter tops, and painted a checker board pattern on the ceiling. 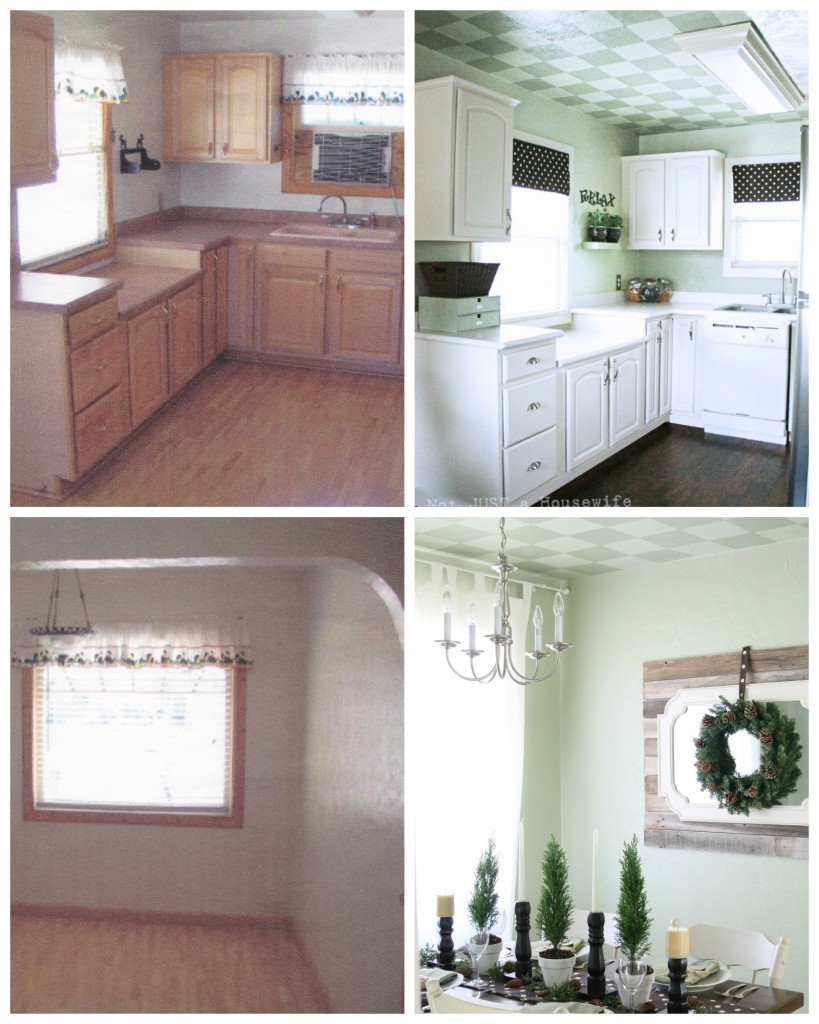 The two bedrooms that are in the basement were very reminiscent of days gone by. One was peach with lots of cupids and plastic flowers and the other was an alarmingly bright mint green. We replaced the windows (actually the whole house got new double pane windows about 4 years ago) and painted. The kids' room got a new closet. I tore down the 3 foot x 3 foot closet they had (that was randomly sticking out into the unfinished part of the basement) and built one on the end of their 21 foot long room. I added a spot at the other end of the room for my oldest so he felt like he had his own space. And our master bedroom got a tranquil makeover complete with stenciled ceiling. 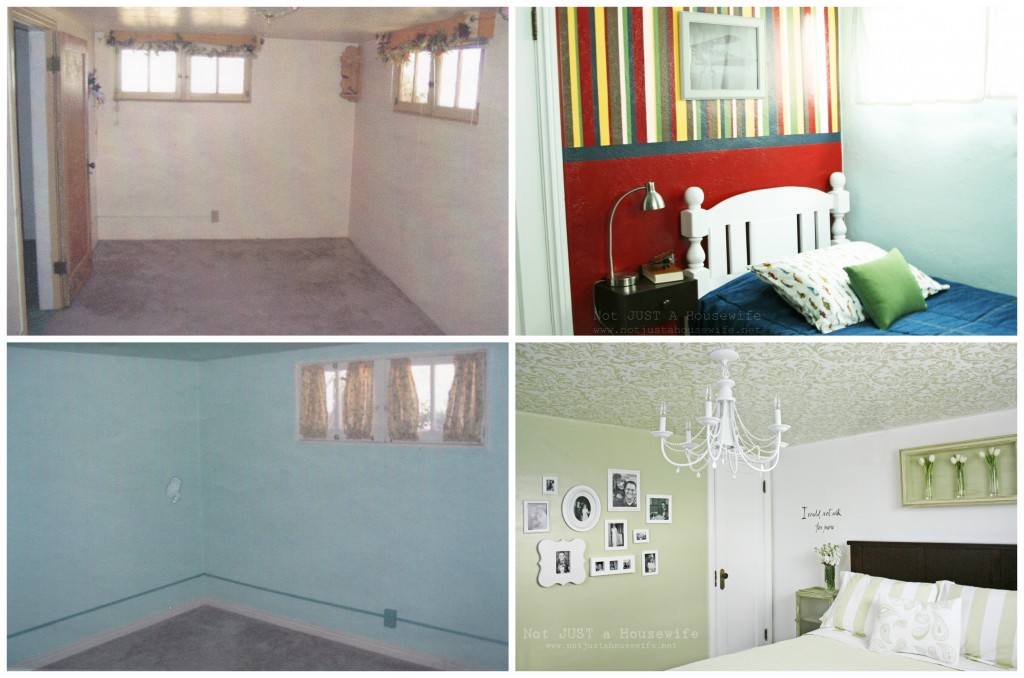 I can't decide if we have done more work inside our home or on the outside. The yard! Oh the yard. It was horrible. No fence, gravel everywhere, no grass, lots and lots of rocks, and the ground was HARD AS A ROCK. We broke a wheel barrel and a wagon because of hauling rocks for months and months. We had a neighbor with a tractor come and plow up the hard dirt. We installed a sprinkler system. We seeded new grass and added a huge garden. And behind the garage (where the red arrow is pointing) we added a chicken pen with coop.

We still have one side that needs a fence. And there are other "fun" things we would like to add. But after living here for almost 4 years without grass, we are just happy to have grass :) 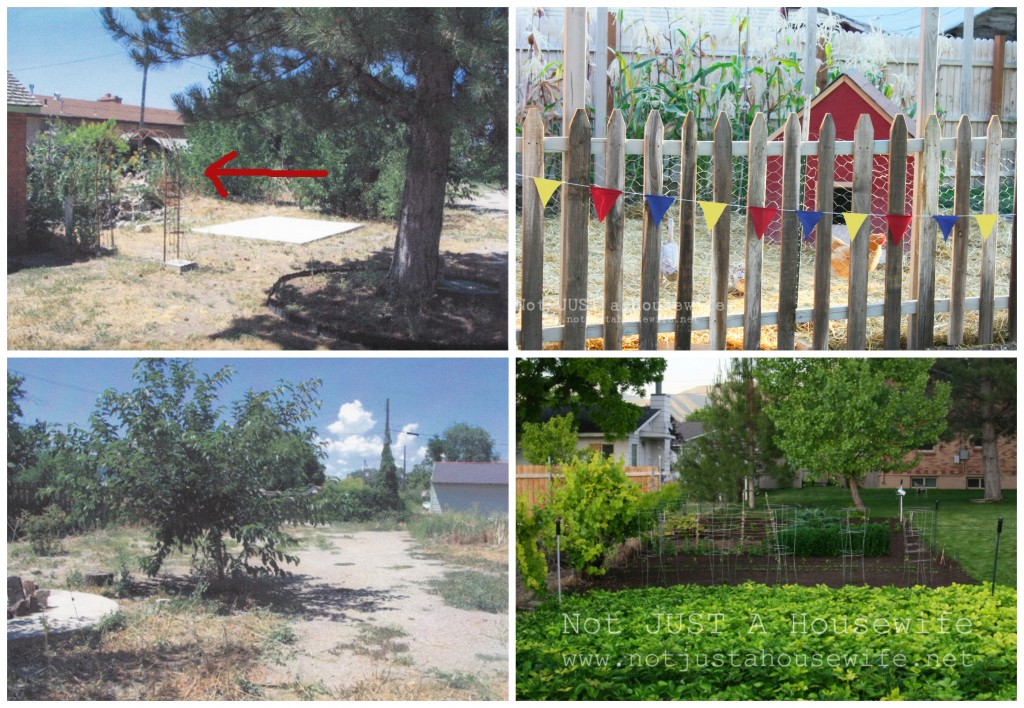 My hallway is so small and cute. I really do love it. We took down the door and added a baby gate (I can't believe my baby is 4!!!) so it didn't feel so closed off. I painted some polka dots and added some plants for decor. 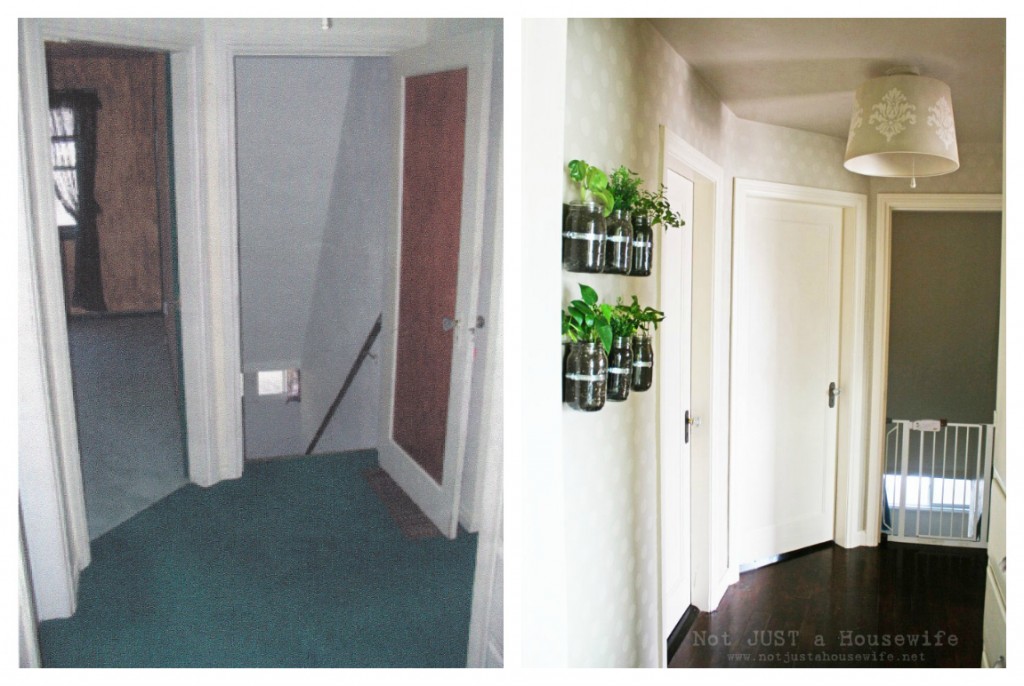 Oh. My. Word. I have three words for you. FORREST GREEN TRIM. Not only was it forest green, but it was just a thick and sloppy paint job.  And the walls.....

I think they were going for a camouflage look but missed the mark. And they added sand to the paint so we had to use a sander to get it smooth again before we could even prime over it.

This was the master bedroom since it is next to the upstairs bathroom, but we use it as the office.

The outside of our house was lacking in curb appeal. Luckily I have vision. It probably scared away quite a few people. The garage door was pink. The trim was also pink. The door was peach and the concrete at the base was painted a rust color. The triangle up top was also rust. I made repairs where needed and painted.I also planted a vine next to the arbor that goes into the backyard.

The house had pink and grey-ish blue trim while the base was painted baby blue. The triangles at the top were a pinkish rust. It was almost like they didn't have enough of the pink or the rust so they mixed them together. But it was nothing a little elbow grease and paint couldn't fix. The front door was in sad shape. It had faded and had large cracks in the wood where it had dried out. I sanded it down, filled the cracks, and stained it.

The walkway was bright pepto bismol PINK concrete. As in the concrete itself was dyed pink. So that sucker got painted. It has held up quite well but I would like to have it re-poured one day as well as the steps due to the fact that the concrete is crumbly.

Oh and one last thing.... The previous owner had found a dead tree and cemented it into the front yard. I kid you not. Cemented. In the ground. I still can't wrap my head around that one. It looked like a creepy Halloween tree and you better believe that digging that sucker up was one of the first things I did. 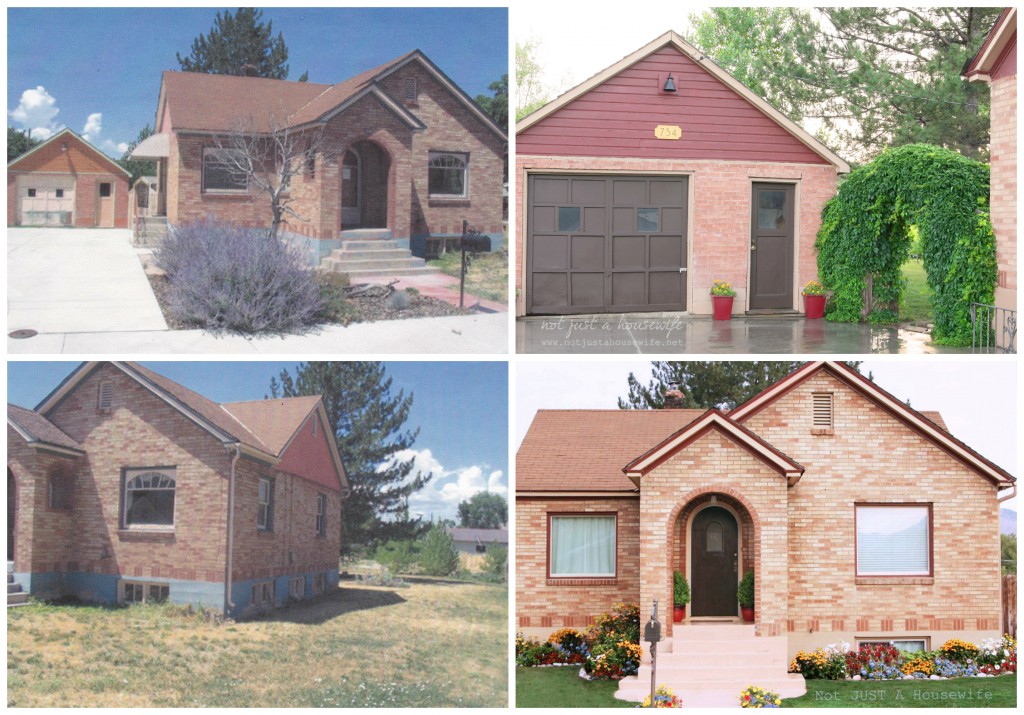 So there you have it! I didn't include the unfinished part of the basement because it still basically looks the same and I didn't have good shots from the realtor. But you got to see how this place looked when the keys were handed over to us. Some days I wish we could have had the money to just do everything all at once in stead of painfully slow over the course of 7 years. But MOST of the time I am glad I had time to really plan out what I wanted and that I could do it myself.

We have done everything as we can afford it. Four layoffs really slowed us down. Having little kids also made things go a little longer. And if I am being honest, I think it will take at least 5 additional years to get my "original" list done. And then I will have to start on the "newer" list. But I love every second of it :)