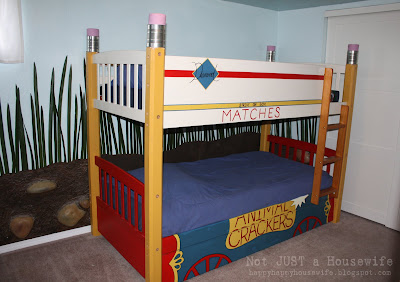 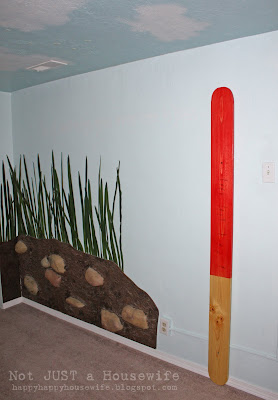 Since the bedroom was suppose to look like they were outside I painted clouds on the ceiling with a sponge. The "grass" I bought at Micheal's in their floral department. I am not sure what it is suppose to be, but it works great! For the dirt and rocks I used a jigsaw to cut the shapes I wanted out of thin hardboard. I used liquid nails to adhere the fake rocks (I bought them for $1 each from SUNROC) that are usually meant for the outside of buildings. Then I mixed up some cement and slathered it on the boards all around the rocks. That became the dirt. I should also mention that I had pre-drilled some holes so I could attach them to the walls later. Painting the cement was probably the hardest part but using a sponge brush helped. After I was done painting I put on a layer of polyurethane to seal it. The panels behind the bed do not have rocks and cement. For safety reasons I just painted them.

One of my favorite things at the Bugs Life part of the park were the benches made out of giant "used" popsicle sticks. I knew I wanted to do something with a popsicle stick but we didn't need a bench. I made one big one and screwed it to the wall. We use it as a measuring stick to measure our kids!

I love this room! I will be sad when the day comes that our boys grow out of it. But I do have four boys so I think it will be awhile.

I love decorating rooms for kids. What fun things have you done? If you want to share then send me your pictures and maybe they will end up on here!!!