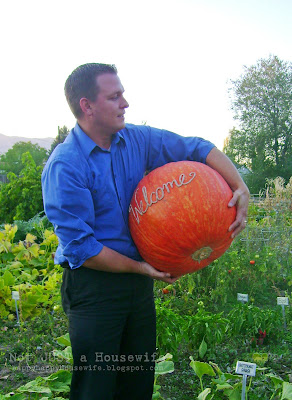 I guess it really isn’t carving, more scratching, but either way it is a fun project. If a pumpkin gets a little scratch it forms a scar. The second year that we grew pumpkins I thought it would be fun to manipulate that scarring process. I scratched WELCOME on one and our last name on another. I also did some that said GIVE THANKS to give as gifts to neighbors. I also have planted white pumpkins and scratched ghosts on them. I have used all sorts of things to scratch them from knives, to corn on the cob handle things, to toothpicks and skewers. I haven’t decided what works best. I think I will try my Dremel next. You need to scratch them when they are just starting to turn orange. They need to be on the vine and still growing for them to form scars. The deeper the scratch, the wider the scar.
These pictures aren’t the best. It was a few years before I started blogging and before I got a better camera. But you get the idea. 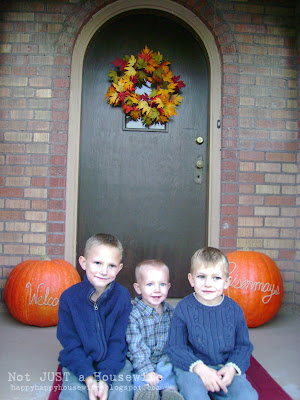 Last year I wanted to do something different. I happened to have enough pumpkins that were the right size to do stick figures of our family. I scratched lightly because I didn’t want to have it scar too much and loose the detail. Some of them could have been scratched a little more, but overall they turned out cute.
Here is dad. 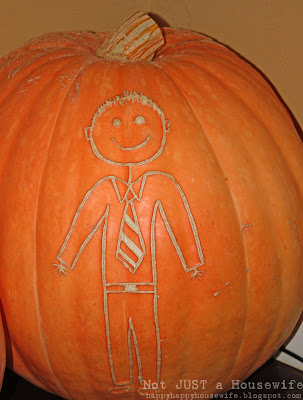 I was pregnant at the time, so here is baby in utero. 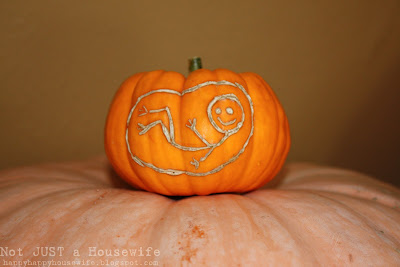 And the whole family! 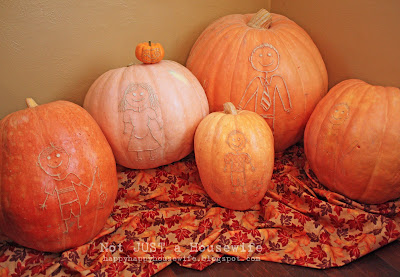 I kept them inside this time because the year they were on our porch they got stolen after only a few days. It made me mad to think they were probably smashed in a field somewhere thanks to some bored teenagers. We actually enjoyed them more being inside so it worked out!
If you have a pumpkin patch this is definitely worth a try.