We went to a Fall Festival held at a local farm last year. On the drive home my (now) 10 year old told me he wanted his party to be just like that. He literally has been planning this for the whole year. He drew pictures and made lists. I of course had to scale back some seeing as I don't have any connections with people who have Ferris Wheels, but I think we did a pretty good job :) 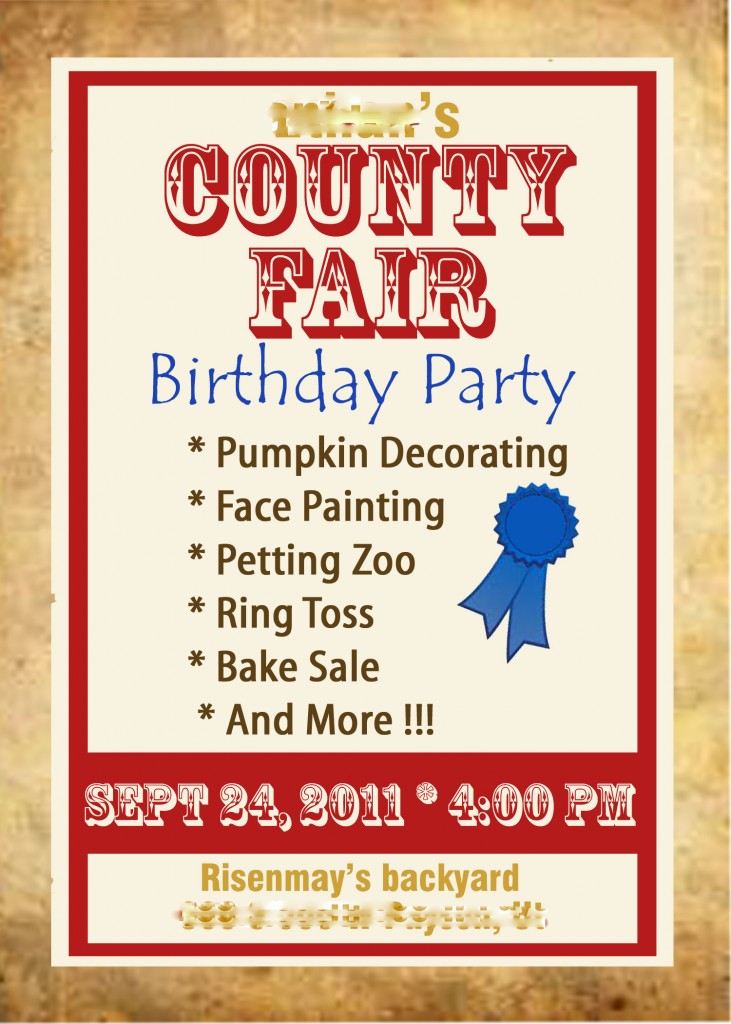 (I created the invites in photoshop)

Remember last week when I told you my one and only lens for my camera broke? I have to manually focus it now. I am not use to having to do that so some of my pictures turned out blurry. I am so sad. But blurry  pics are better than none, right???

We did things differently with this party. My son wanted it to really feel like a fair. Plus he is saving up for something big. So we invited the WHOLE FAMILY of each child. Instead of bringing a gift we had them bring the money they would have spent on a gift to "buy" tickets. 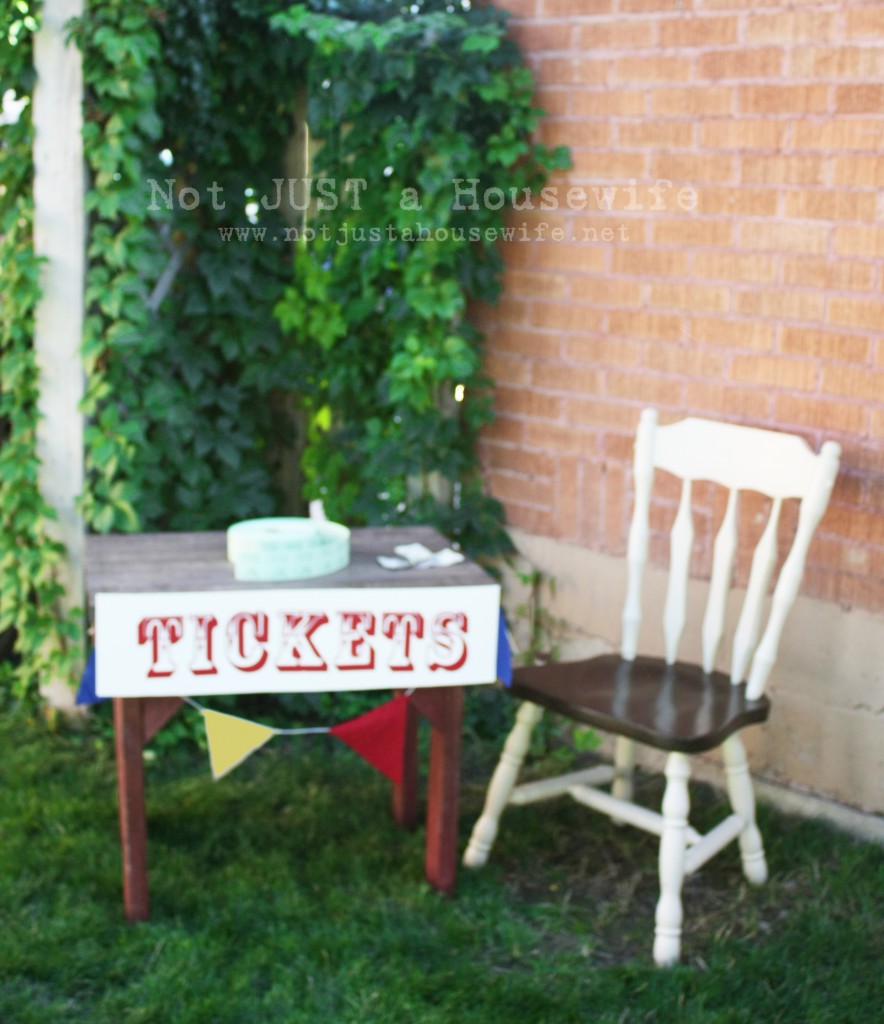 They could use those tickets to go and do all the activities. 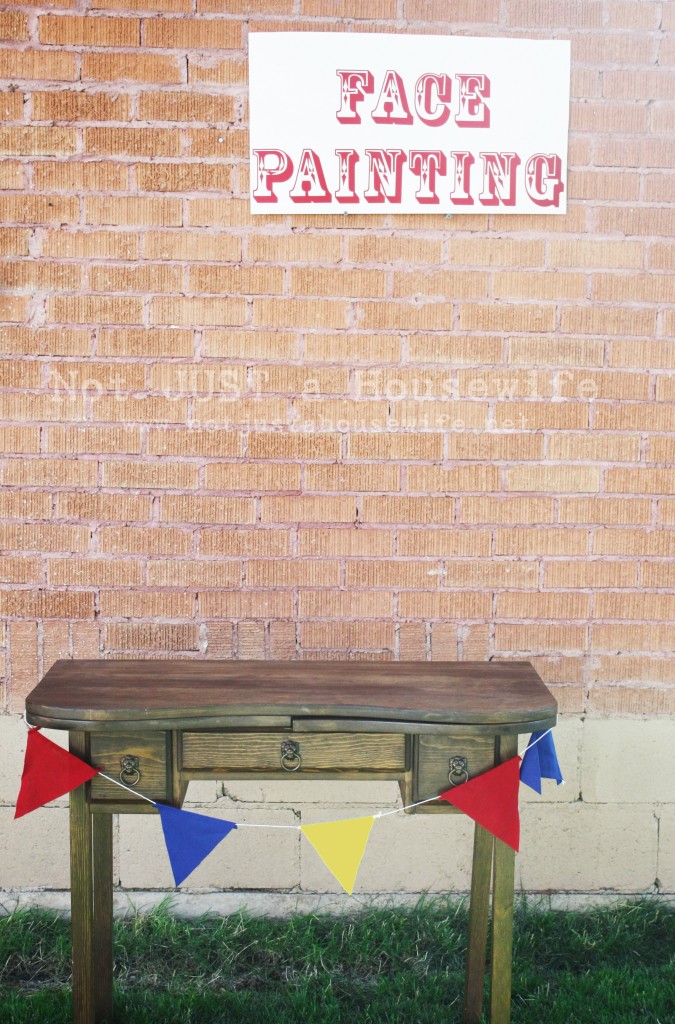 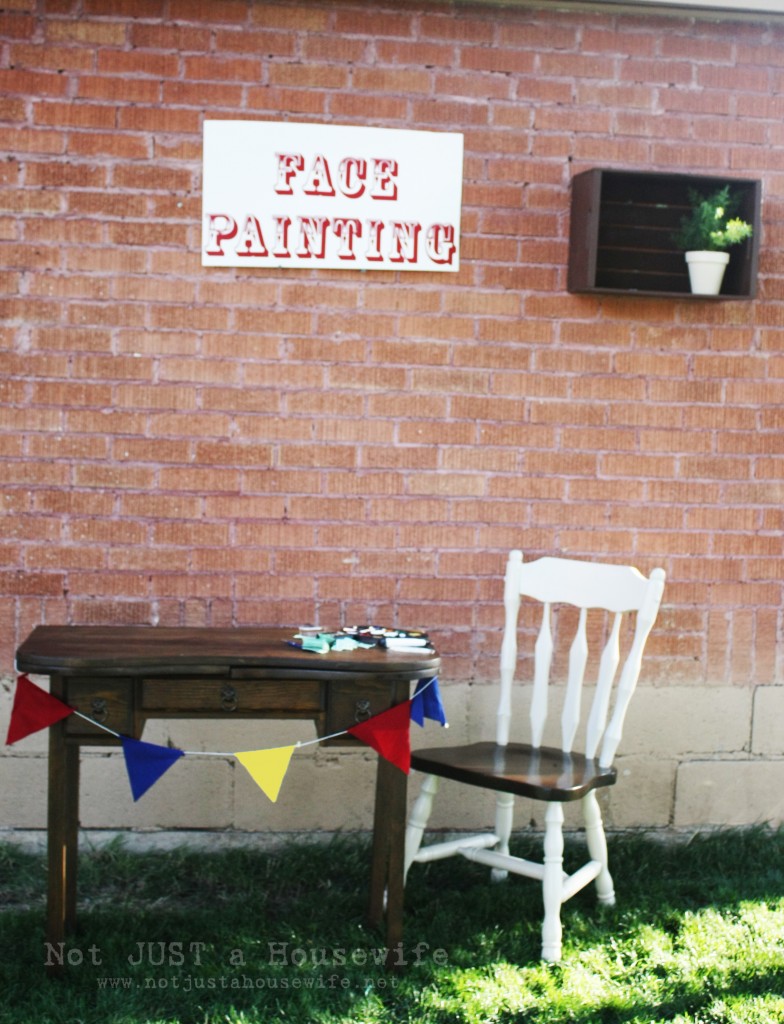 This was my booth. It was hard to be the photographer, manage all the booths and face paint, but it worked out. I wish I had the money to hire someone to take pictures. But this party was on a shoe string budget :) 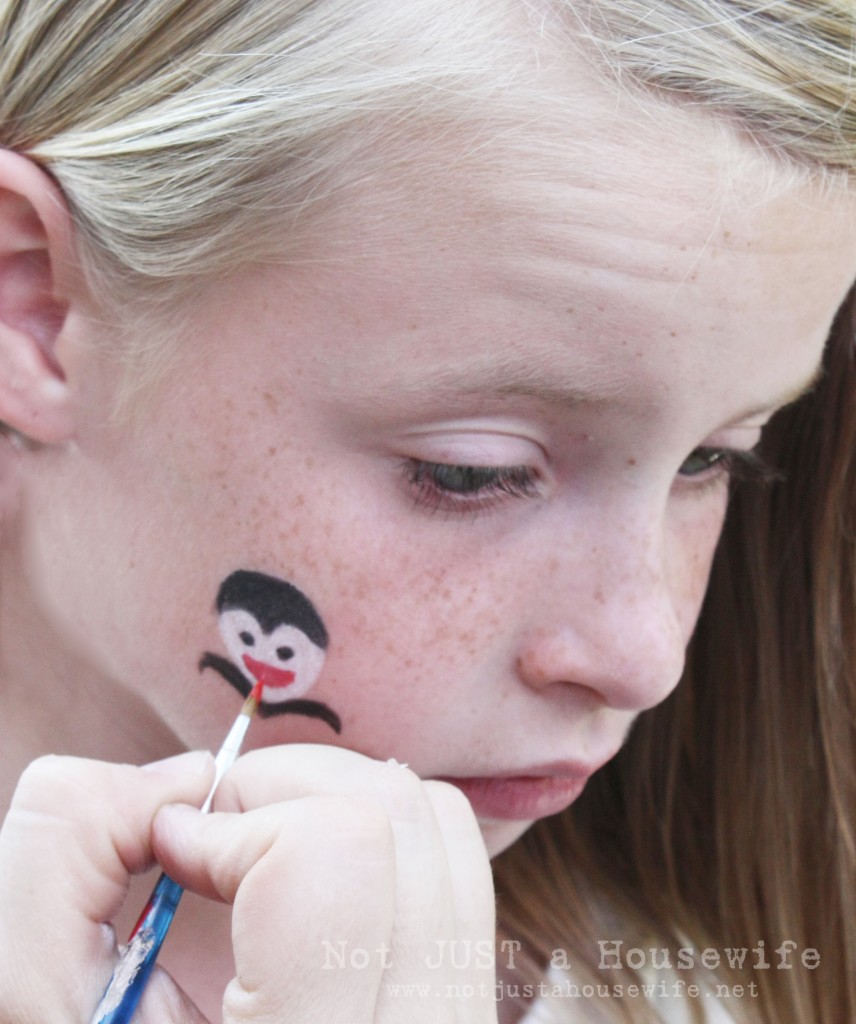 The hit of the party was the petting zoo!!! My son spent the most time here and none of the kids wanted to go home because of the animals.  (P.S. You can see the new fence we are building! I love it) 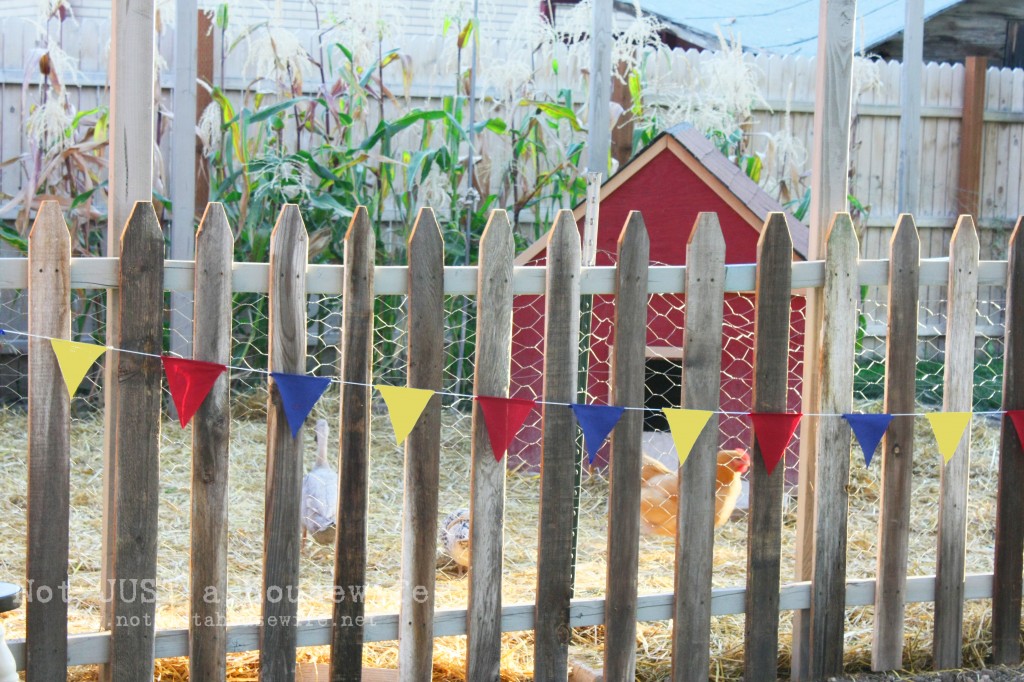 We have some awesome friends that brought their pygmy goats and bunnies over for the zoo. Our neighbors let us borrow a mother hen and her chicks to go along with our chickens and ducks. 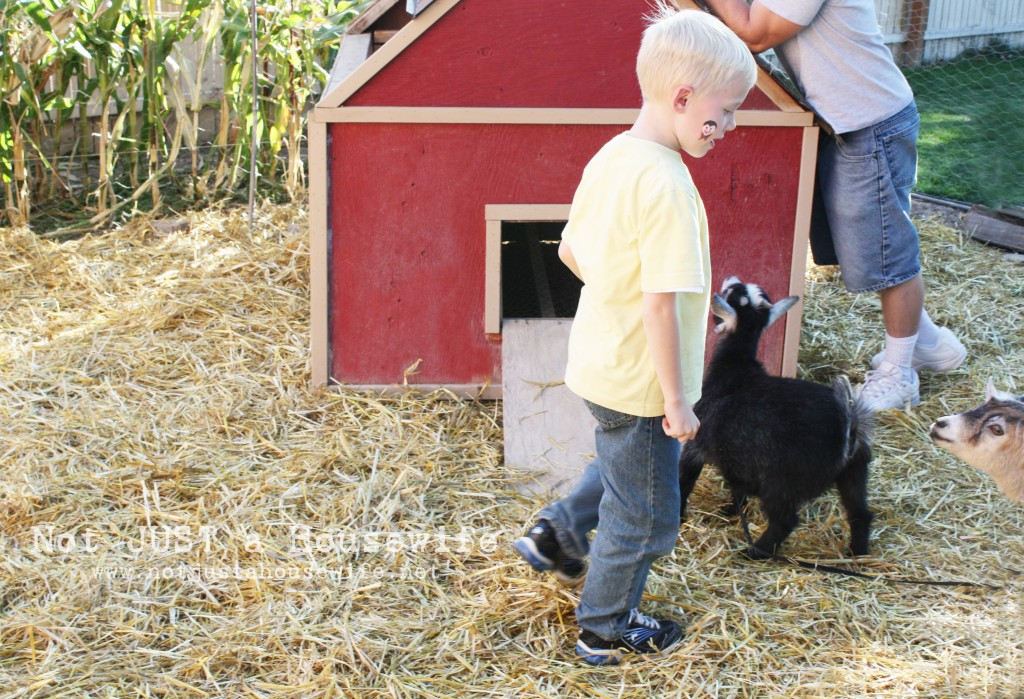 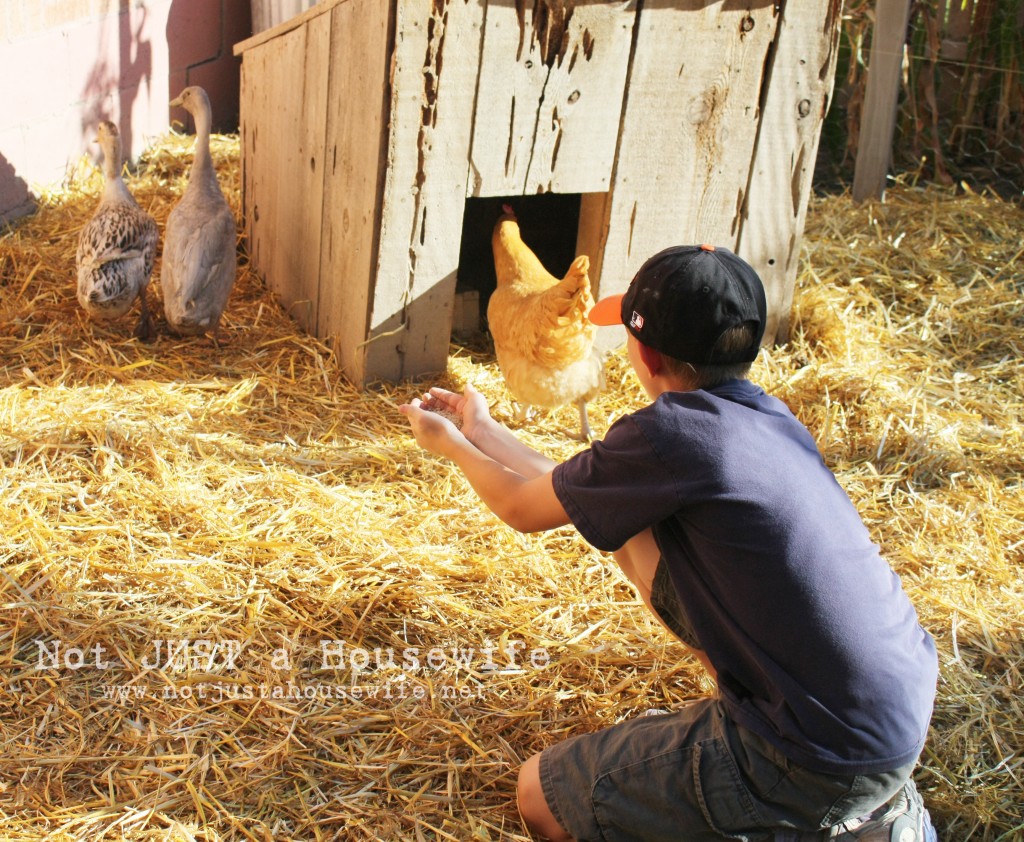 I am totally in love with these little pygmy goats! I almost have my husband convinced to get a couple :) That is as big as they get!!! 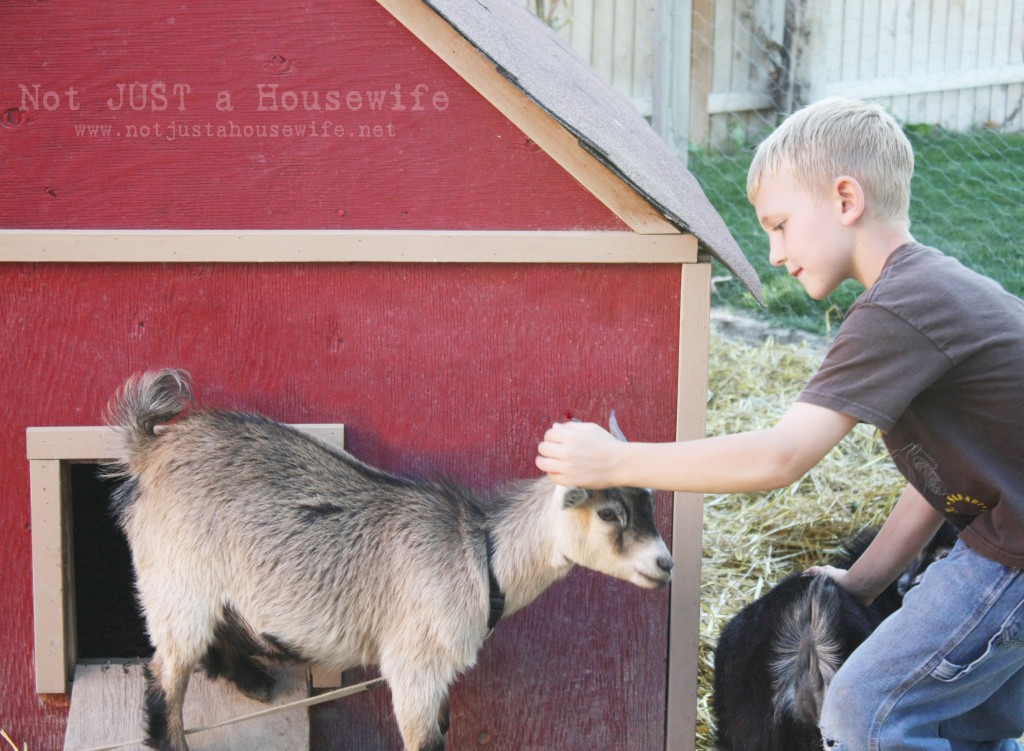 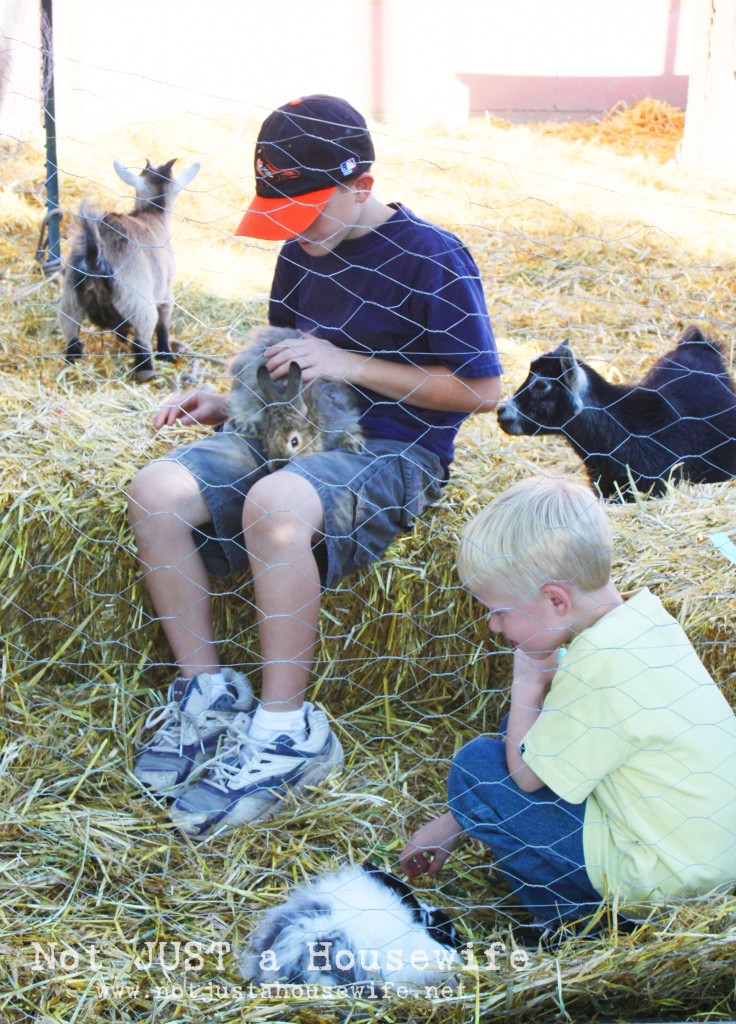 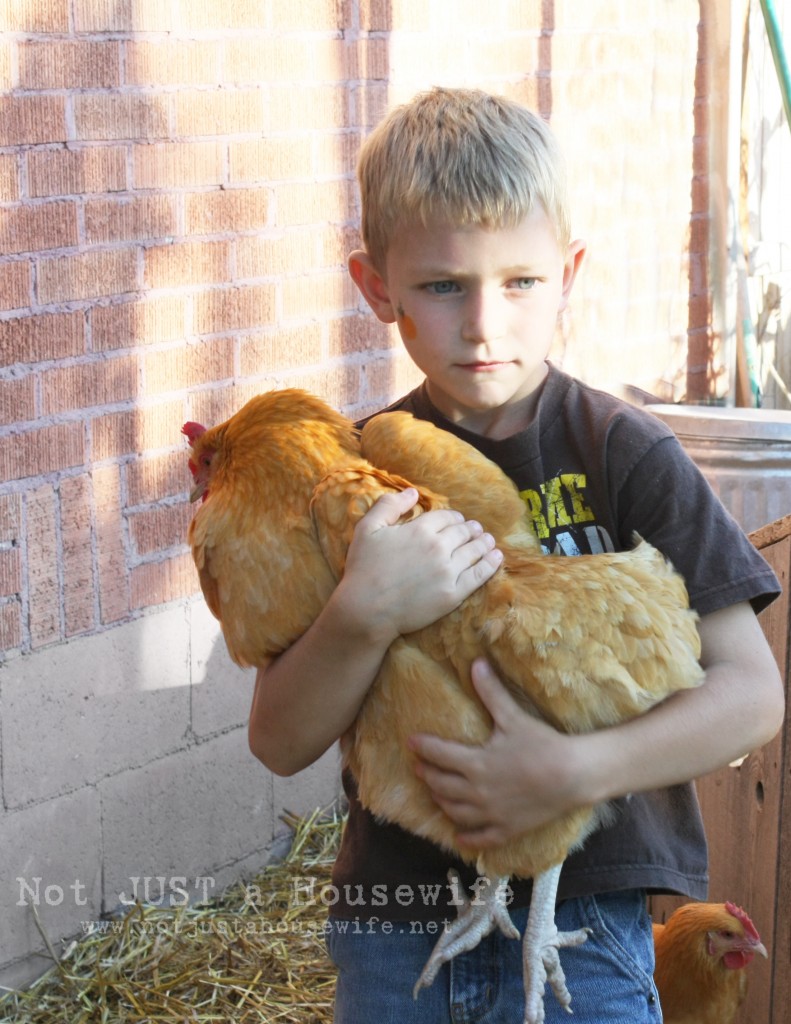 The other popular thing was the ring toss, for 2 reasons. 1) The party had a ton of little boys. Boys are competitive. 2) The prize was live goldfish!

Yep. Real goldfish! But I had other options in case any of the parents didn't want the fish. (I knew the parents though and wasn't too worried) They could choose a toy and a bag of goldfish crackers. 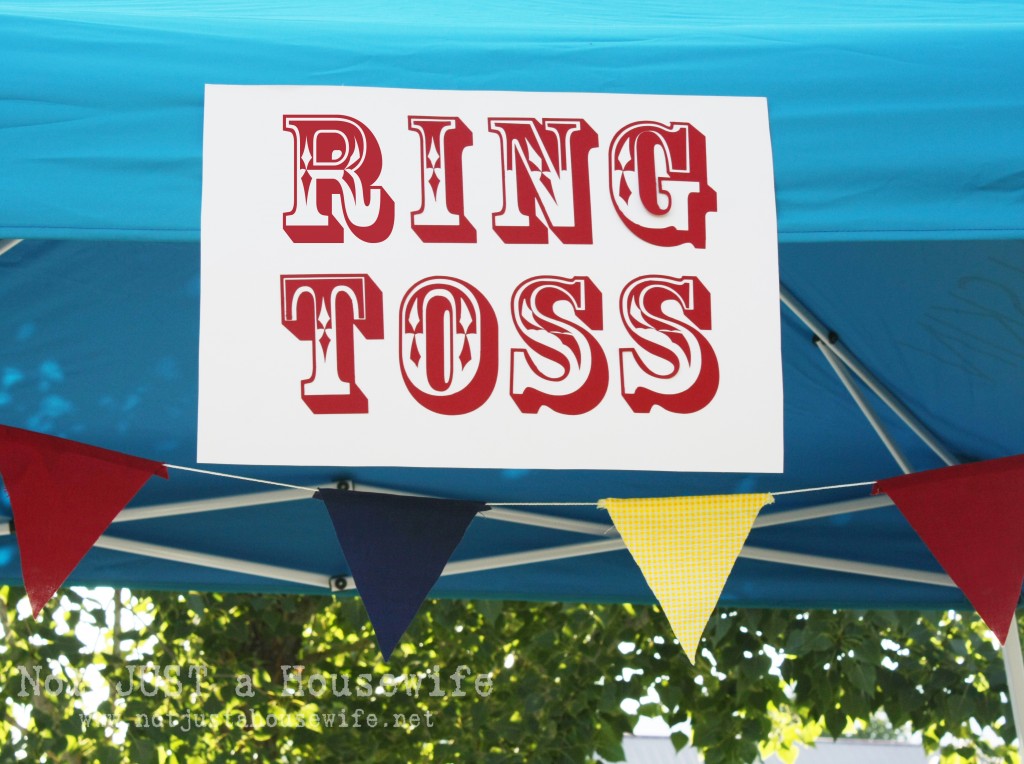 (I made the signs to match the font of the invitation using my Silhouette machine. It cut the lettering out and I used spray adhesive to stick them to poster board)

The bottles are 2 liters of Rootbeer and the rings were mason jar rings. 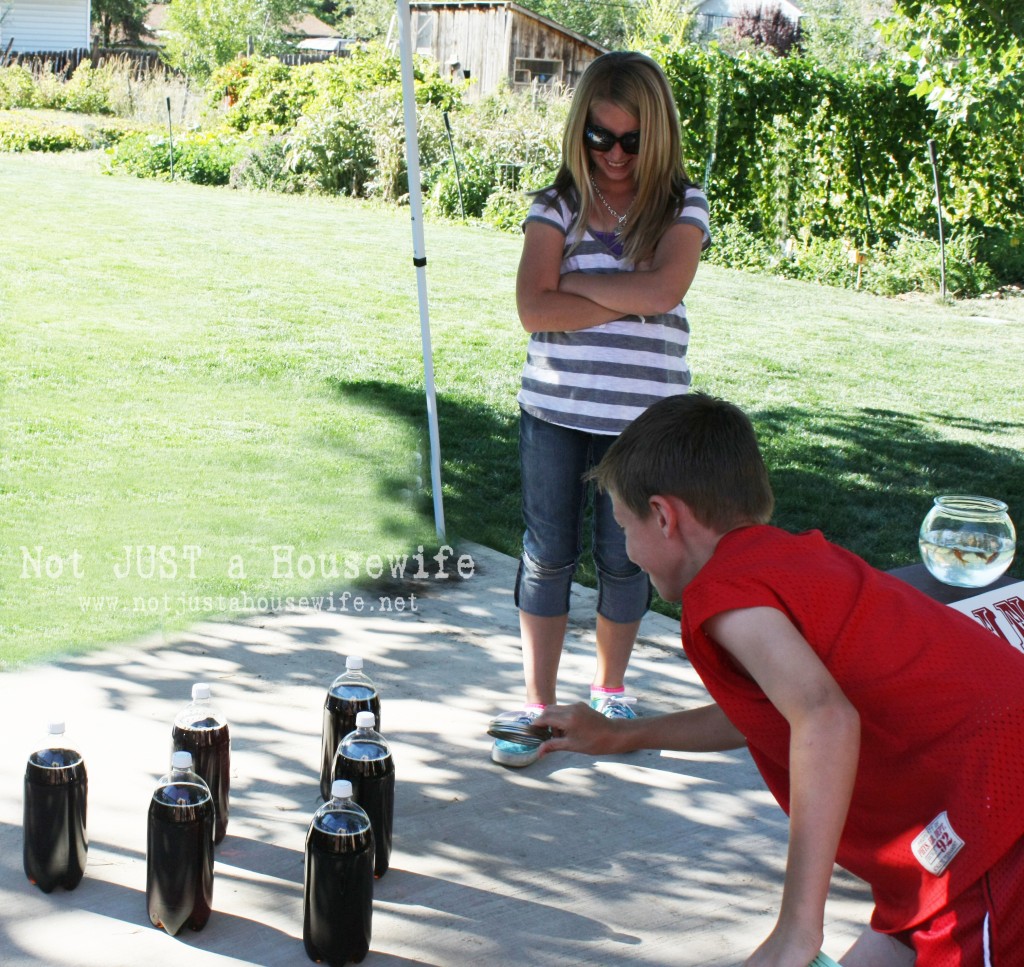 I am so sad that this one is super blurry (darn broken lens!). I wanted to bring out my kitchen table but we would have had to take off the kitchen door. So I used a card table (thanks mom!) and some apple crates. You can't really tell but the fabric was red and white checkers. 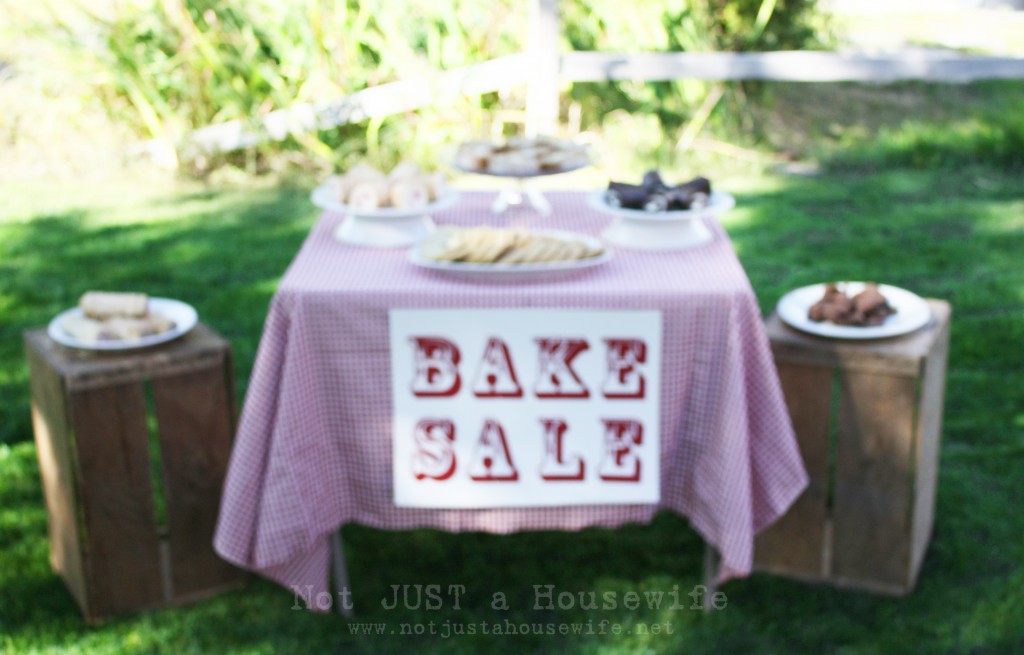 For the pumpkin decorating I bought foam sticker sets from Oriental Trading for the kids to use on the pumpkins. They could mix and match and the best part was NO MESS! I was a little surprised at how much the older boys liked this. I thought mainly the smaller ones and the girls would do it.

Not all of them are pictured. I forgot to take pictures of this until after some people had gone home. There were a TON of kids :) 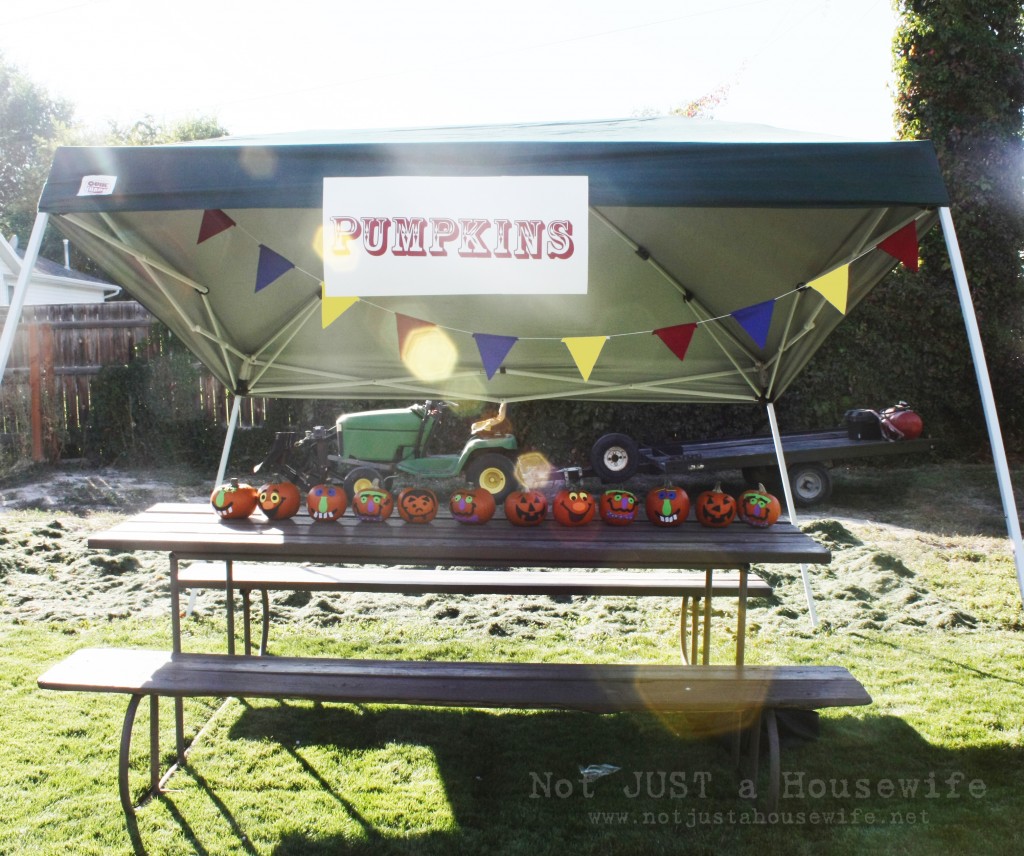 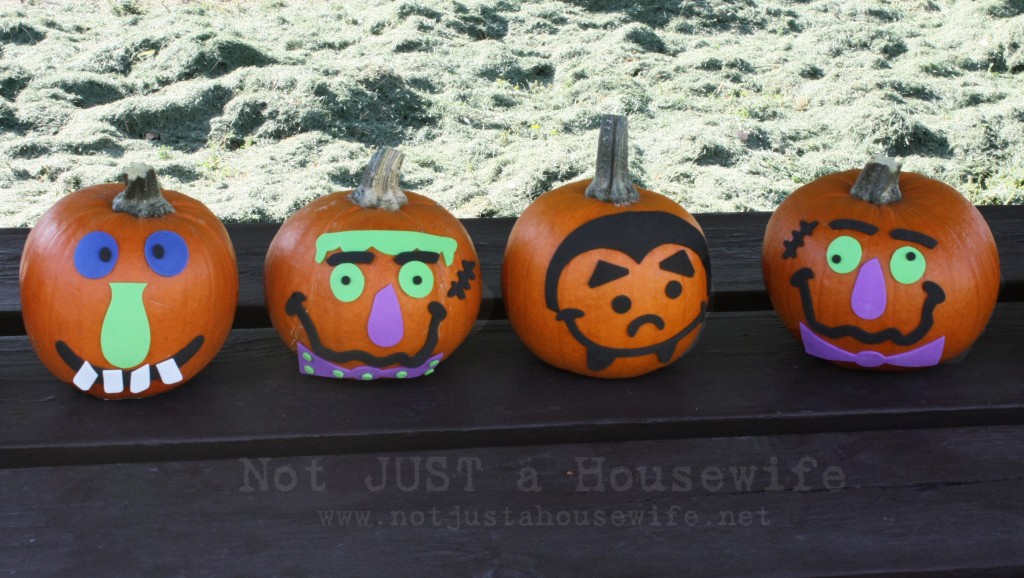 This kiddie area was not in the original plan. It was a last minute genius idea. I realized since we were inviting the whole family of each child that there would be some tiny kids. They wouldn't want to do all the things there. I grabbed out play tents and all our tunnels. I was going to fill one of the tent with a giant bag of plastic balls we have but couldn't find them in time. We also put out slide over there but it is not in the picture. The little ones LOVED it!!! 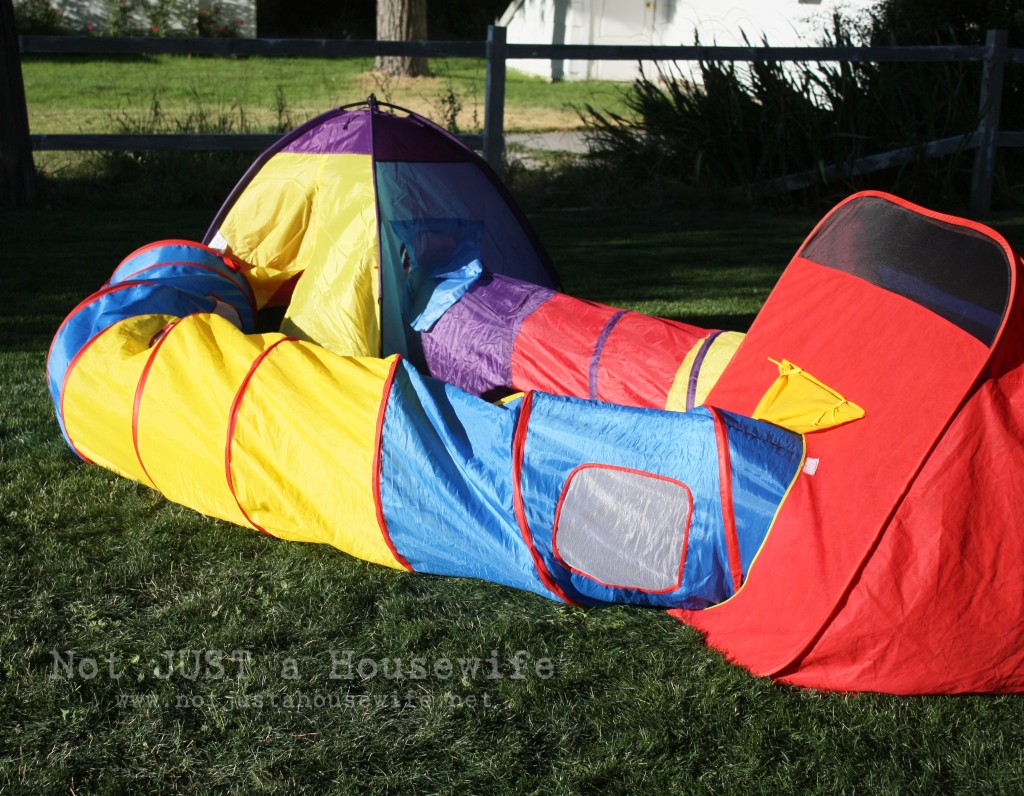 I didn't really get a picture of the food table. It was not anything fancy since we were having hot dogs and chips. But we had a rusty yellow  barrel that the cute red table top barbecue sat on. Next to that was the table with a denim table cloth. To hide the ugly orange water cooler, I set it inside of a wood barrel. I had used my jigsaw to cut a hole so you could still access the water spout.

My husband took the kids for a hay ride around the neighborhood  towards the end of the party. 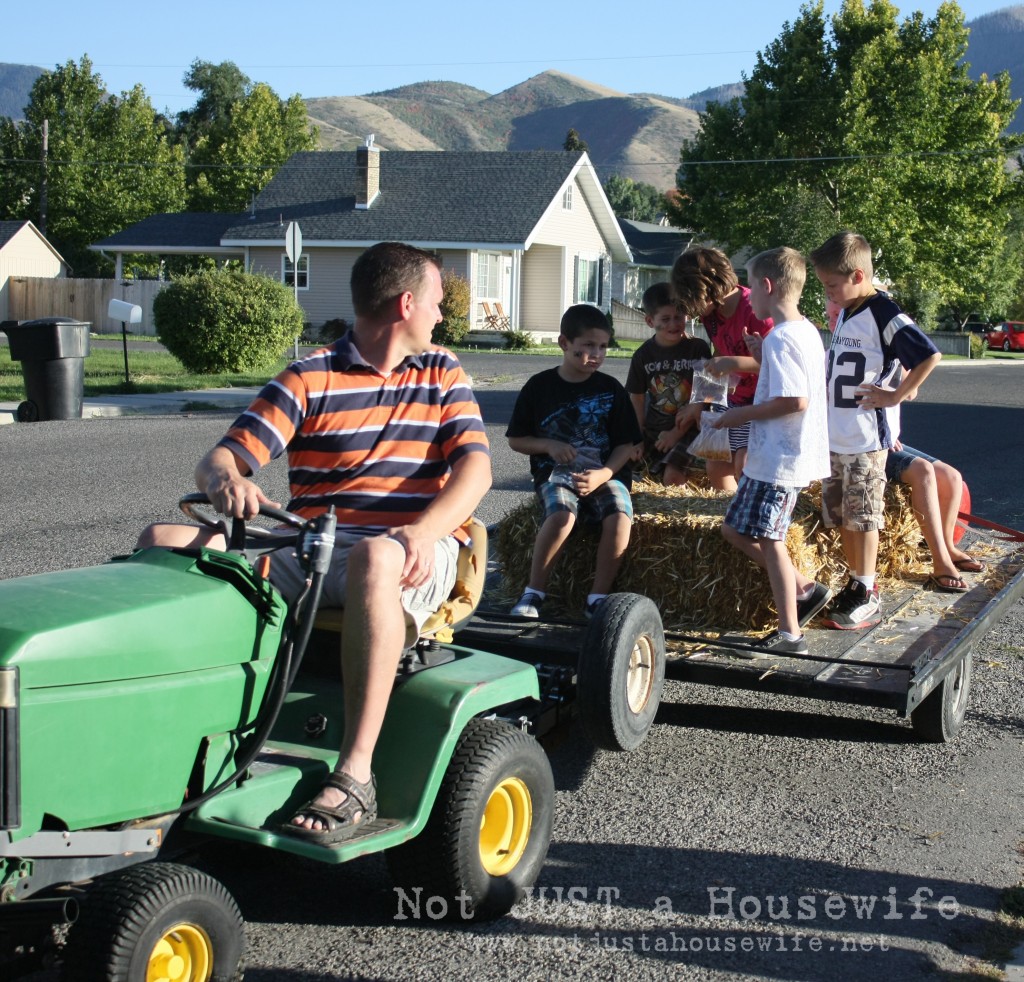 I always have a hard time right before a party. I always have things that don't get done. I always have to scrap certain things. And there are always things that go wrong, or get lost, or break. I have a hard time because I know how I wanted it to be and what it COULD have been. But at the end of the day the only thing that matters is that the birthday kid was happy. He didn't care that the dozens of blue ribbons I had cut out were still on the kitchen table. He didn't care that I had to buy the bake sale items because I ran out of time to bake them myself.  And he didn't care that I had my hair slicked back and was a sweaty mess.  He felt special. And he had fun :)