This post is from a few years ago but since I get asked about our chickens a lot, and because it is that time of year when baby chicks are showing up in feed stores, I thought we should revisit this topic. We love raising backyard chickens! We have since added a couple of bunnies to the mix and they do really well in the coop with the birds. The have burrowed under the hay and sleep there.  Since we can't live on an actual farm, this is as close as we can get :) 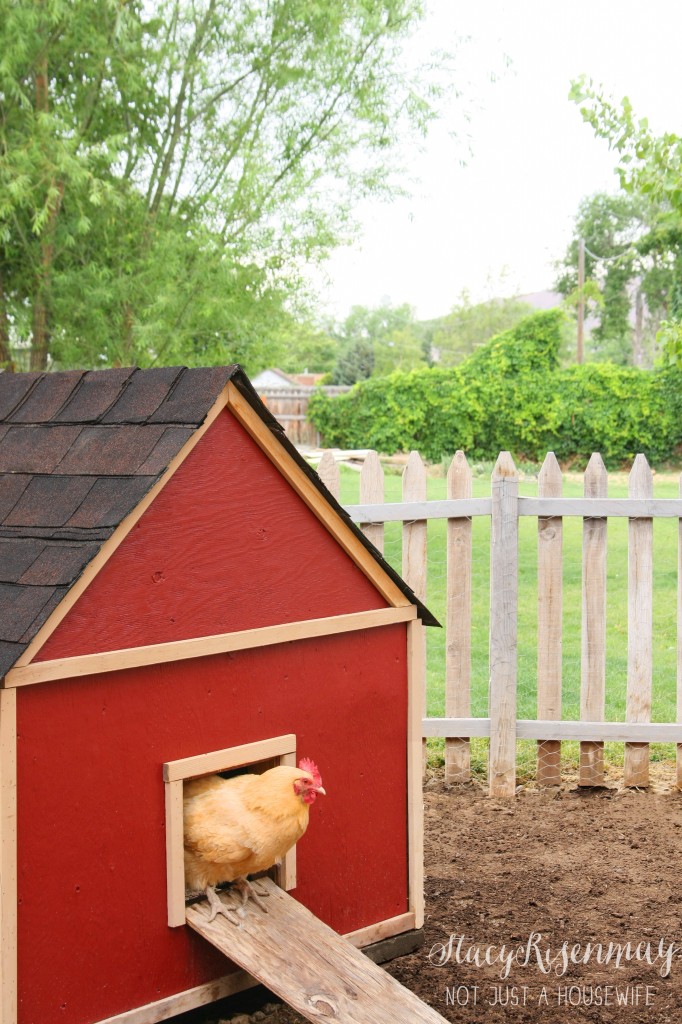 Well, it is pretty simple. I grew up in the country. We had horses, dogs, cats, chickens, and ducks. We also had an occasional other farm animal if I batted my eyes at my dad and pleaded while doing a head tilt. My husband also grew up in the country. And I want my kids to experience a little bit of what it was like even if we do live in a "city". I think having animals to care for as a child teaches you so many things. Here are my top reasons why we have chickens.

*Low maintenance pet (Food is cheap and we just have to have a neighbor kid feed them when we leave somewhere. Pretty easy!)

If you are thinking of getting chickens there are some things to consider.

Make sure that your city or town allows them. Also decide what type of pen or coop you want and if you have enough room. Different types of chickens have different types of temperaments. Some are more prone to pecking each other and some are so laid back they don't really. Our neighbors had some that literally pecked each other so much they all had huge bald spots and scabs. After much research I chose Buff Orpingtons. They are so mild that they say that if you have them, to not have other types of chickens because they won't even peck back in defence. They let my kids pick them up and pack them around. We also like silkies. They are very sweet as well and get along with our Orpingtons :) What are the predators in your area? Do you have coyotes, snakes, weasels, foxes, or anything else that might steal eggs or harm your chickens? That may determine whether you want to have them or at least how to construct your coop. Another thing to consider is your climate. Some are not as well suited for cold.

This is the chart I used way back when we were decided on what breed to get. It tells you all sorts of information about the most common breeds. I also love the site called My Pet Chicken.

So basically I am telling you that just like with any other pet, you should do your homework. 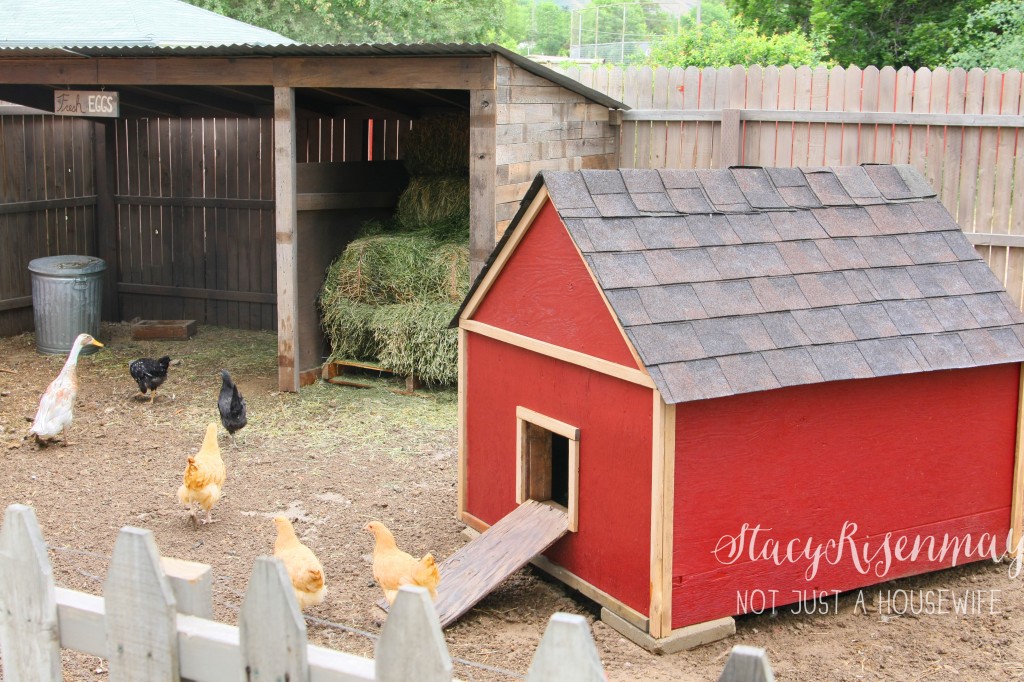 Since it takes up a bit of space, we have tried to make it look as nice as a chicken pen can look. I still have a few things I would like to do to make it even better but let's be honest, a chicken pen is not high on my to do list. Especially when my basement is unfinished. But we have made it pretty decent so far. 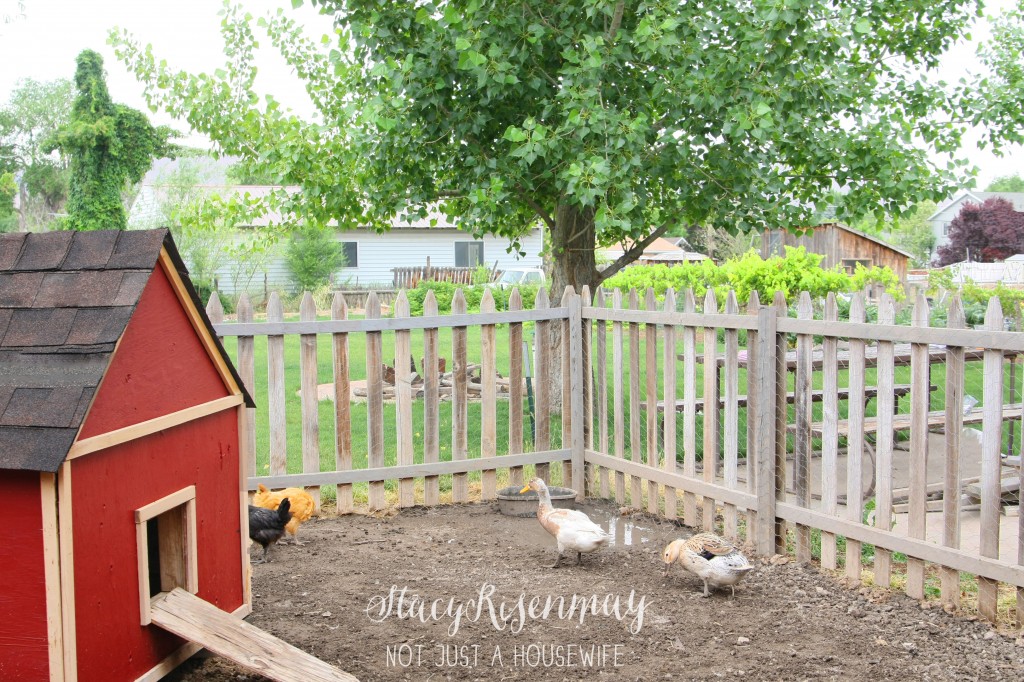 My husband and don't fight a lot but one of our biggest arguments was over the design of the chicken coop. I wanted a glorified doghouse that was simple and easy to build. Mr. Architect drew up plans for a 3 level chicken condo (Not really, but it was very elaborate). I realized it was our first building project at our new house and his first chance to design something for us, but we were planning on having four chickens, people. Four. They didn't need guest rooms for visiting relatives. Now if you look at the coop we ended up with you would think I won that argument. But not exactly. Our budget won.

After buying a house and moving from out of state we didn't have a lot to throw at a chicken coop. Especially when our house needed so much work. We actually used wood from a shed my dad had built a LONG time ago. My mom no longer has horses so she had the scouts tear a lean-to and a shed down on her property. We also had some 2x4s that we had ripped out of our house. And when we moved in we found a pack of shingles in the garage left over from when they re-shingled. We painted it with leftover paint from painting the trim on our house. So we really only had to buy the trim and the chicken wire for the bottom. 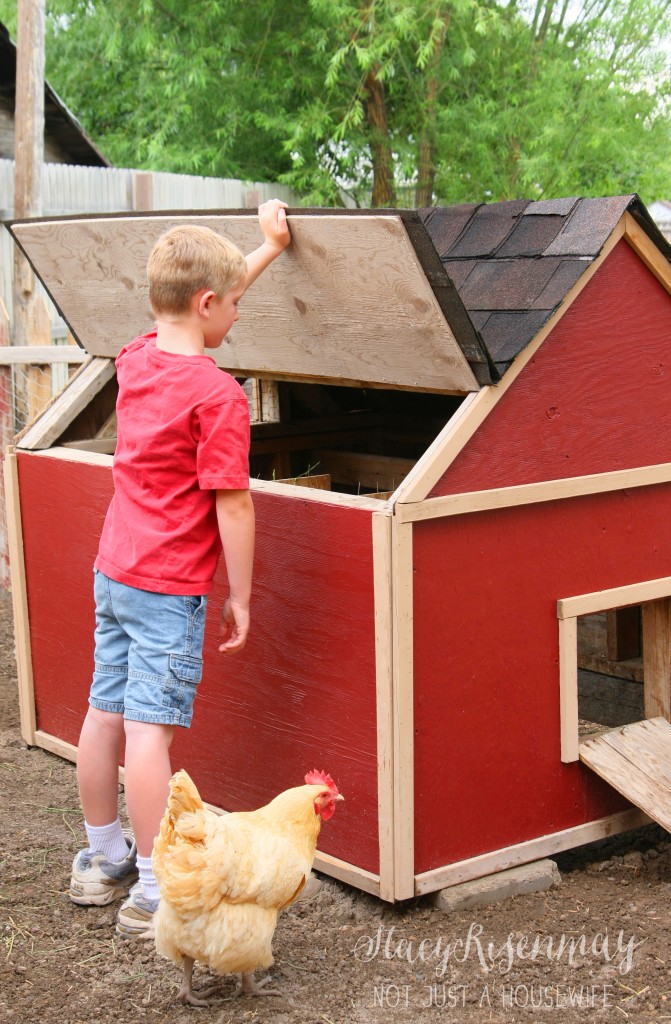 Since I had had our whole marriage up until this point to think about one day when we would have chickens, I also had a lot of time to think of the perfect chicken coop. I wanted the chickens to have a lot of room to roam but I didn't want poop in my grass and everywhere else. I didn't want to have to walk into a stinky chicken coop either. So I decided I wanted one that was small and didn't require you to walk in in order to get the eggs. So a small coop and a large pen (to contain the poop) was the perfect setup for us.

On the topic of containing the poop..... We have a plastic bin full of "chicken coop shoes" just outside the pen. They are really just my husbands old sneakers. You have to wear them in the coop and then they go back in the bin.

I also use our garden tiller and till up the dirt in the pen several times a year to keep it "fresh". 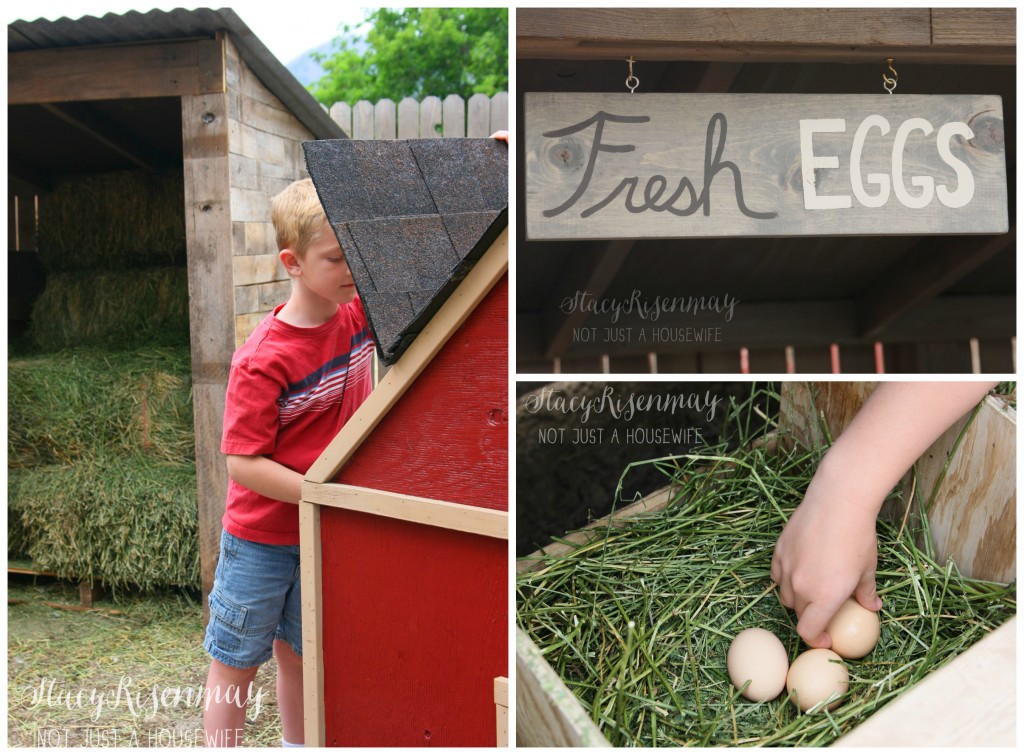 We made the roof lift up by using a piano hinge all along the seam. There are 4 nesting boxes along that side. The other side (that doesn't lift up) has a 2x4 for roosting.

The bottom has two layers of chicken wire so that the poop can fall through. We dug a pit below. Then once or twice a year we tip the coop on it's side and shovel the poop out. P.S. I can't believe I am writing a post about chicken poop.... 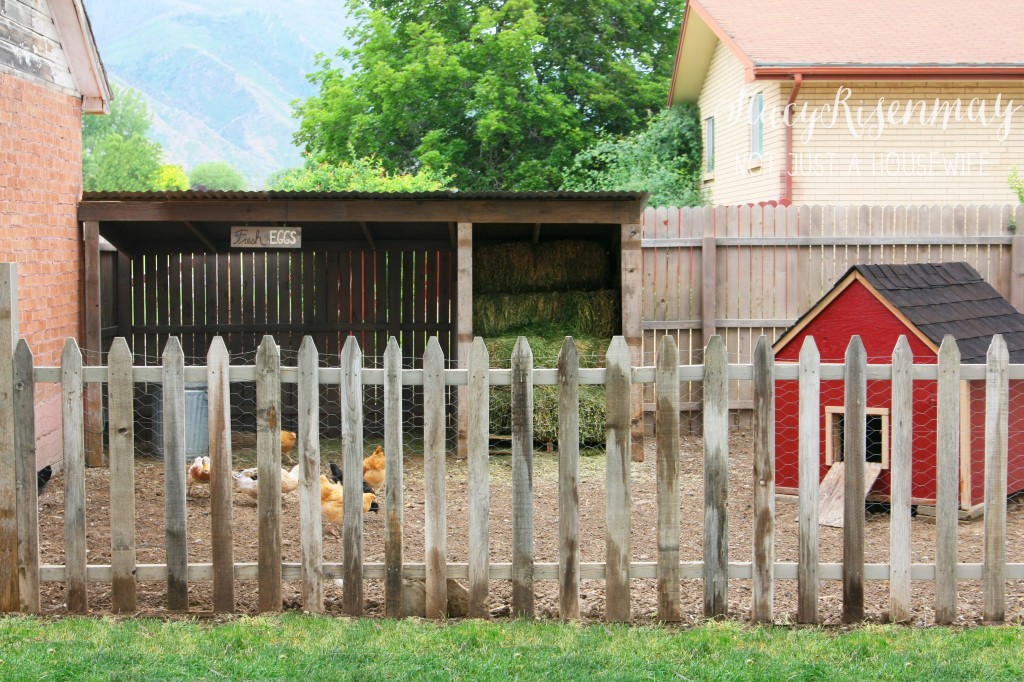 Along with raising backyard chickens, we also have a couple of ducks. Why ducks? Because they are stinkin' cute. We use to have a smaller house, that really did look like a dog house, that they slept in. But once we built the lean-to last year they didn't really use the duck house any more. A word of caution...Ducks are messier than chickens so if you don't want to deal with that, stick to chickens.

I had a lot of small scrap pieces of old fence pickets left over from past projects. I made reclaimed wood floating shelves, the barn wood cabinet, added some behind my dining room mirror, and many other little things. So I decided to use them to cover the plywood side of the lean-to. 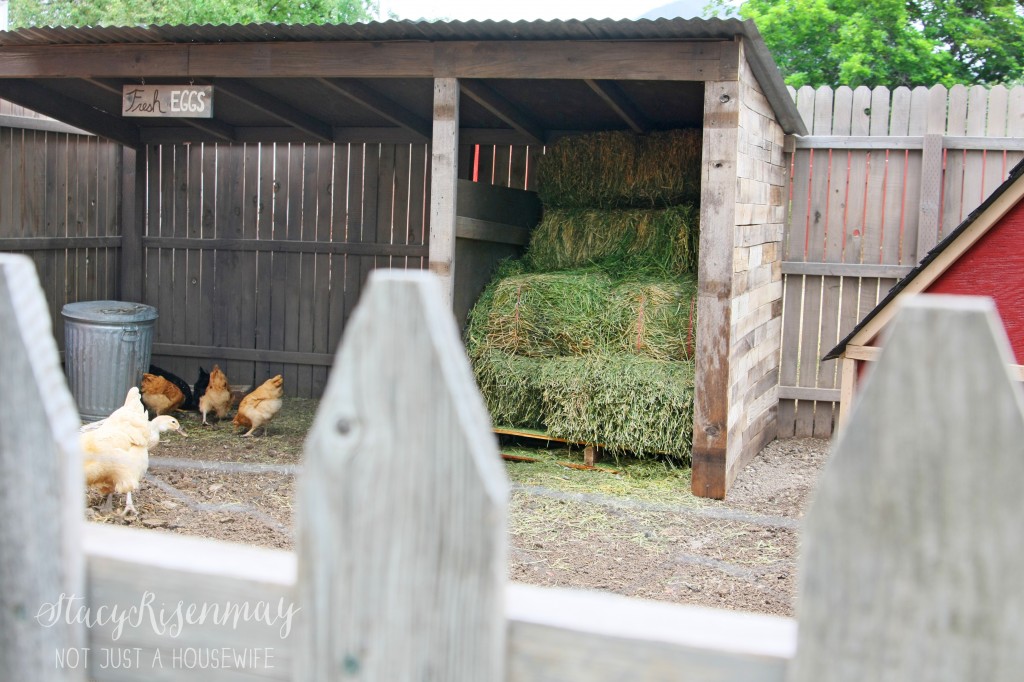 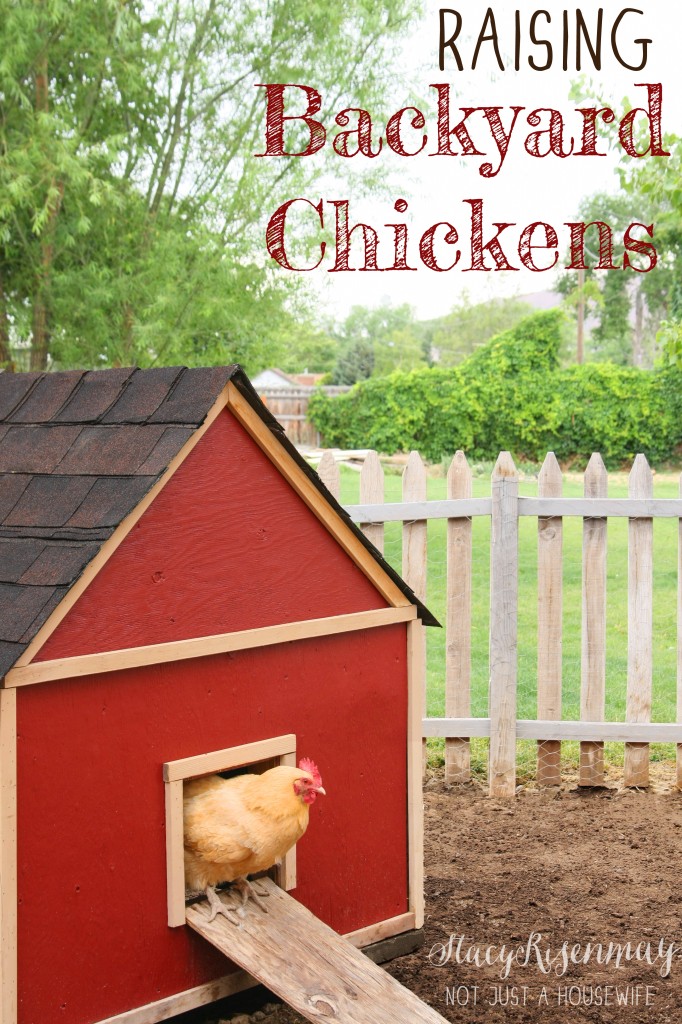 Would you ever consider raising backyard chickens? Do you have chickens?

Do you have any other advice? I would love to hear your thoughts! 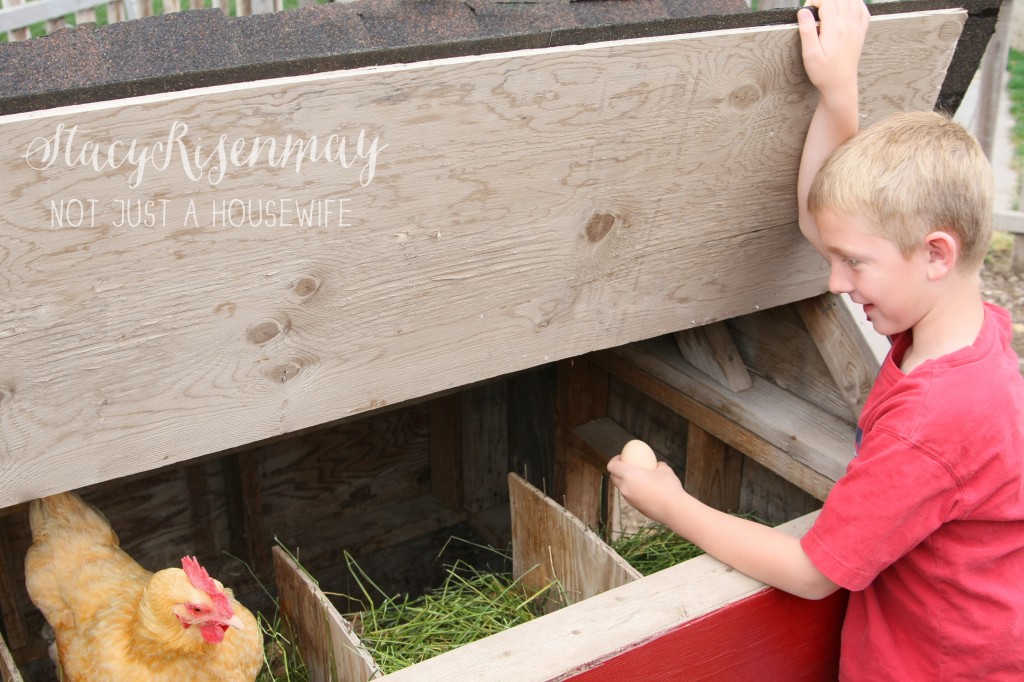 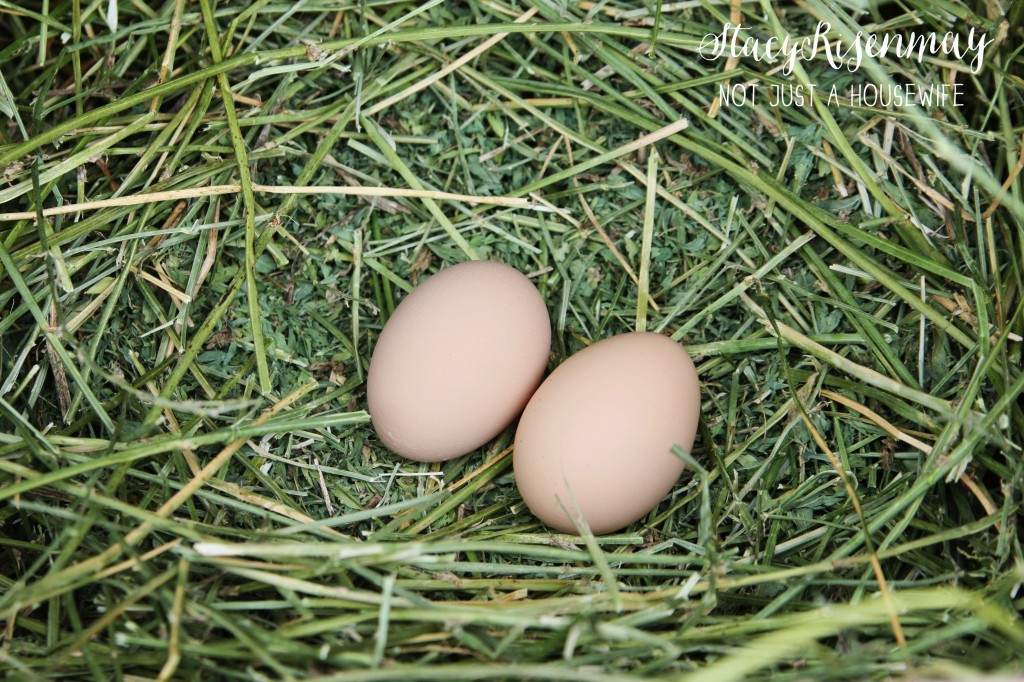