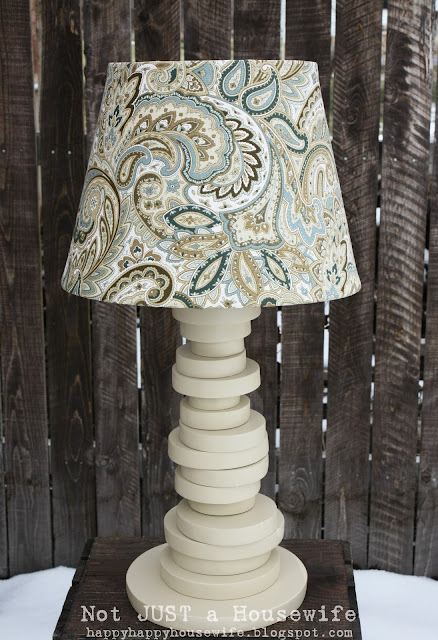 I had some MDF (medium density fiberboard) left over from a project that I will be posting about on Monday next week so I thought I would use it to make another version of my scrap wood lamp. Instead of squares, this time I did circles!!! I love it :) My playroom/downstairs family room isn’t even done yet but it has a lamp!

And like a lot of my projects, this requires power tools. I am on a quest to get you all to use them :)
First I used a jig saw  to cut out some circles that  I traced using small plates and cups. 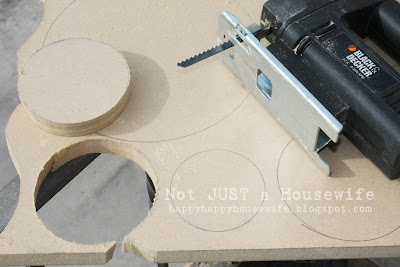 Once you cut them out they may have places you need to touch up. Put them on the ledge of whatever you are using for a work surface with the part that needs touching up hanging over the ledge. Press down with one hand to steady it and cut with the other hand.

Touch up or not, you will definitely need to sand them. Start by using a very gritty sandpaper like 60. That will shave down any bumps and shape it. Then go back over it with a fine grit sand paper (120 or 220) to smooth it out. 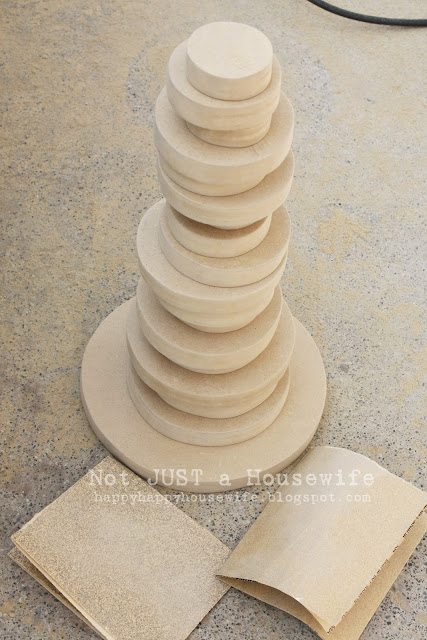 I used a wood boring bit to drill holes into the circles. I didn’t want them to all be centered. I wanted them to be all wonky. This is not the size I used. It is just a google image because my camera battery died right about now. 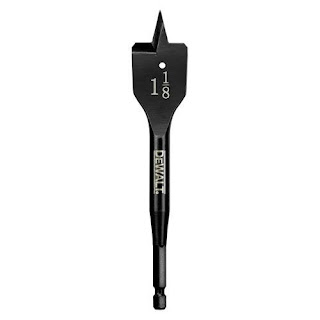 I painted the circles a tan color that matched to fabric. Valspar: Prairie Dance I believe was the name. Sometimes when you paint MDF it gets rough. Just lightly sand it with a fine grit sand paper after the first coat of paint. All the coats after will go on smooth.

Okay. Battery recharged.
The very bottom piece will NOT get a hole drilled. The second to last one will get 2 holes drilled. An extra one for the cord. 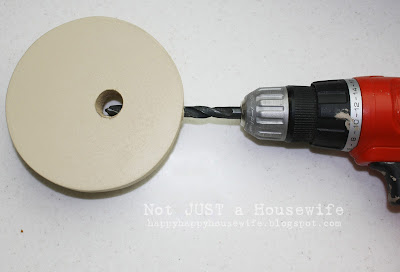 I used wood glue to attach all the circles together but it was because I was going to nail them with my brad nail gun. If you are not going to use a nail gun I would use a stronger glue like epoxy. 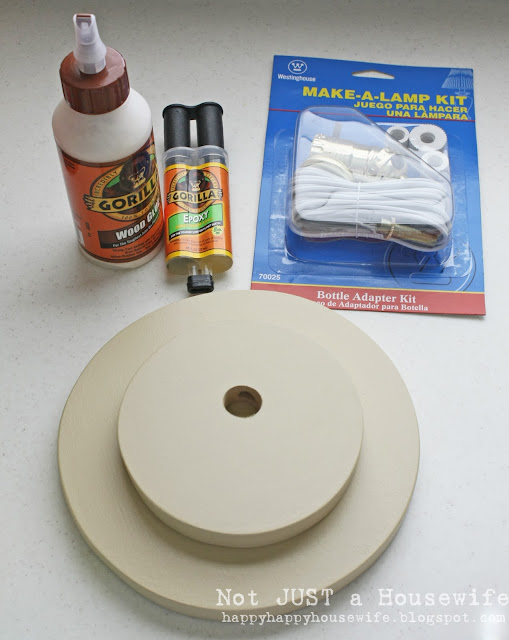 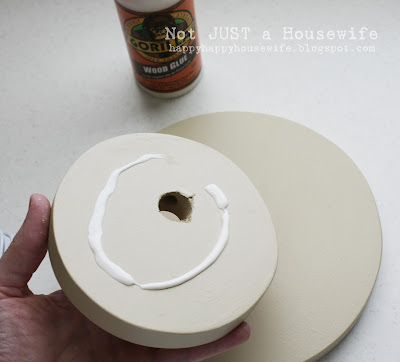 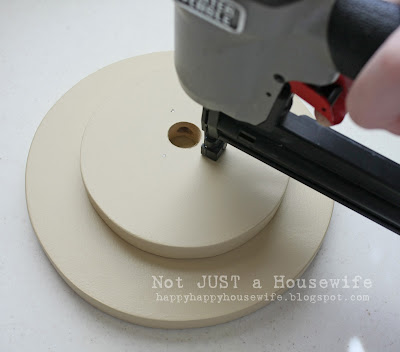 I threaded the cord from the $10 lamp kit through the holes. 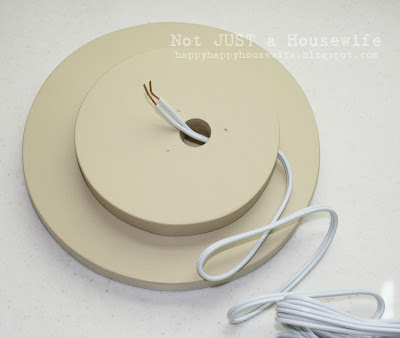 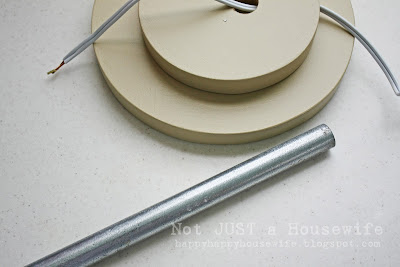 Then I used conduit for added strength. I wish I would have done this with my first scrap wood lamp. I put the cord through it as well. This made it so I strung the circles onto the pipe (that the cord was running through). I hope that made sense. I was so excited for the fun assembly part I forgot to take pictures :)
Once all the circles were stacked up I added the rest of the lamp kit. They are so easy to put together. Easy. I promise.

P.S. Conduit is cheap and is meant for electrical! I cut mine with a hand saw but you might be able to get someone at Home Depot or Lowe’s to cut it for you in the store.

Now for the shade!
I didn’t hand paint it this time. I wanted to show how you can use fabric instead. I used the shade and cut out this shape. 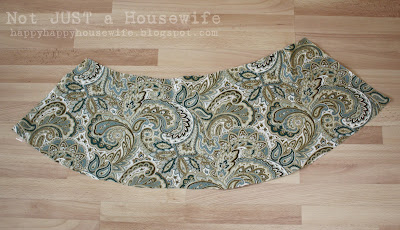 I sprayed the shade with spray adhesive first and then wrapped the fabric around the shade. This took longer for me than the actually building of the lamp! I kid you not. Me and material don’t always see eye to eye. I struggled to get it to line up. But eventually I did. I glued one end down to the shade. The other end I glued a hem before gluing it down. The “hemmed” side covered the un-hemmed one. 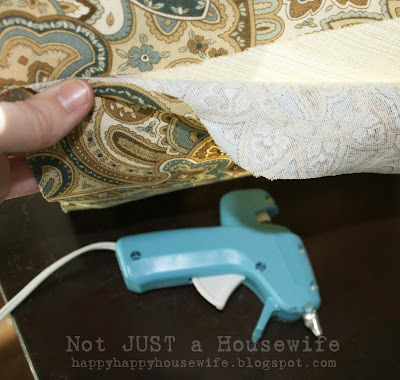 Then I trimmed off the extra material all around the top and the bottom. Like that awkward shot? I was trying to show you how and take a picture myself. No cute assistants to help this time! 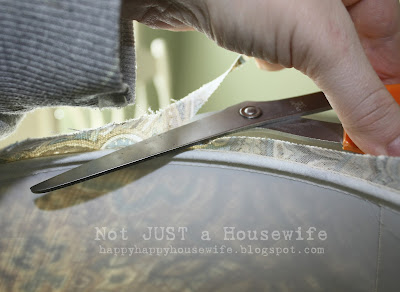 Then I used the glue gun again to glue the fabric down on the inside of the shade. I don’t have a picture of this but I glued cream ribbon on the edge of the fabric to cover up the raw edge. 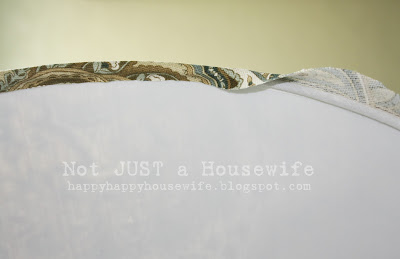 And there you have it! My new lamp :) 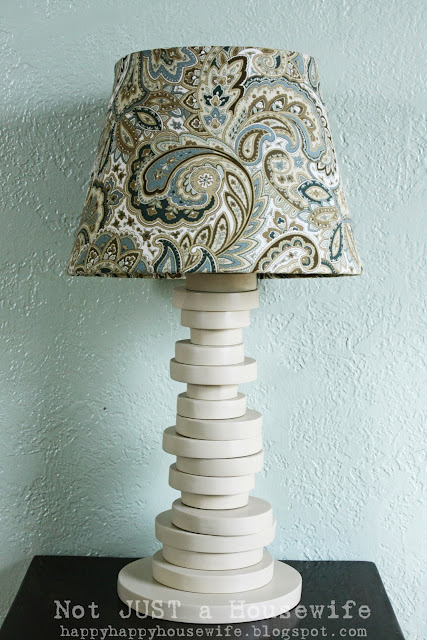