Let me tell you a little story. Once upon a time my bathroom faucet broke. We bought a new one. I couldn't replace it myself because the fittings were all rusted and too tight. Enter my not so handy hubby with big muscles. He had to remove the sink in order to get the faucet off. Problem #1: The sink was the original 70+ year old sink. It was held in there by  some fancy old clips. They were so corroded that they snapped and broke. Problem #2: Those particular clips are no longer manufactured (trust me, I called everyone). We tried every clip on the market and none of them worked. So we needed to get another sink. Problem #3: The old sink was a weird size. We couldn't find a sink that would fit the hole. I searched for 2 weeks online. Nothin'. Sooooooo, that meant we now needed a new counter top as well. Problem #4: My hubby was unemployed at the time and we had very little moola. So I did what any self respecting DIYer would do. I made my own! Total cost for a new sink, faucet, and counter top $89.00!!! No kidding.
I think I can handle that. Especially since this is a somewhat temporary fix until I can afford the real thing :)

The After:
I wish that my bathroom had better natural lighting because this does NOT do it justice. So you are all invited to my house to see it in person :) 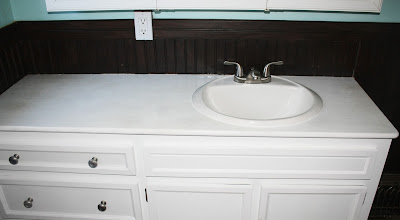 Since the far shot doesn't show any of the detail, here is a close up. . . (still doesn't do it justice). 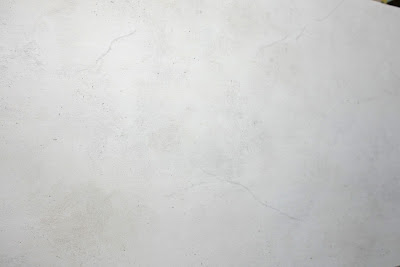 The Before:
Not terrible. But the metal around the edge and around the sink was hard to keep clean and made it a little dated. 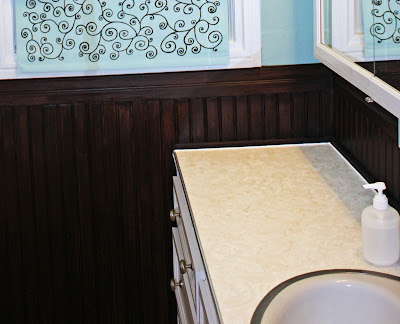 I started with a sheet of MDF. It cost 34 dollars and some change. I only used a small amount and I have since made several other projects with the left overs! I measured the size for the counter top and used a jigsaw to cut it. You can also use a table saw. 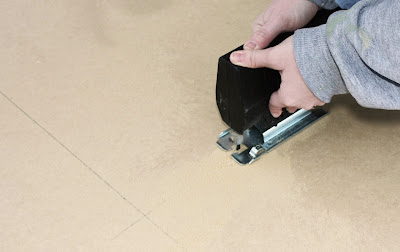 Once it was cut I drew a hole for the sink. I used a drill to create a starting place for the jigsaw. 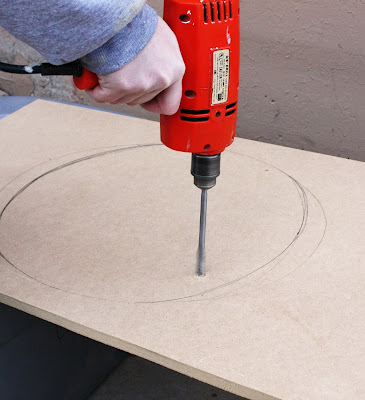 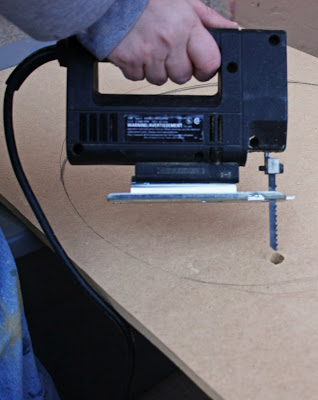 I didn't worry about it being perfect because the sink is a top mount and you won't see it. 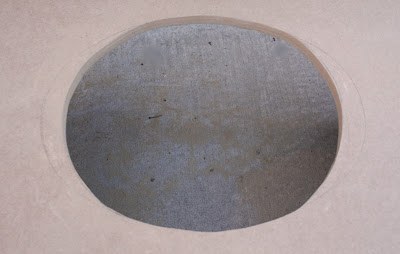 I don't have a router so I called a cute neighbor to see if I could use his. He is an older gentleman and he was a bit skeptical about a girl using power tools. It must be a generation thing :) I was happy to let him do it for me. He did a great job! 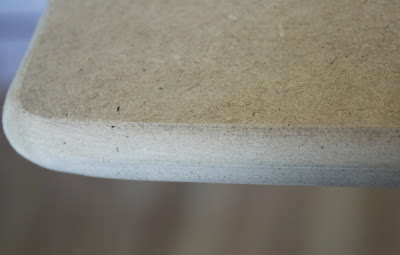 I painted it white. Yep. It is on my kitchen table. Don't worry. I had it all done and cleaned up before the hubby got home :) 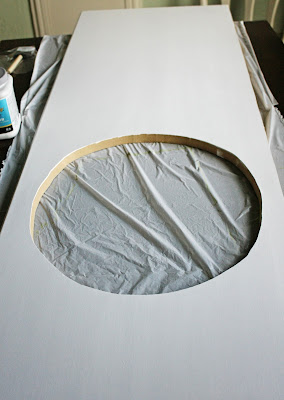 When raw unfinished wood, or MDF in this case, gets painted it can become rough. I used a fine grit sand paper to buff it smooth. 150 or 220 grit would work. 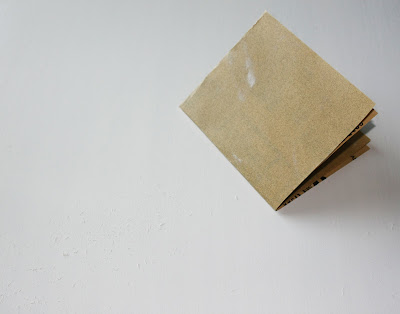 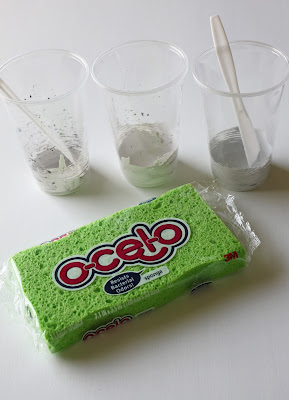 Once I started trying to sponge I realized it would have been easier to have the paint in a bowl rather that cups. But it worked alright. I lightly sponged on the paint. I didn't go all crazy. I figured I could add more later if I thought it wasn't enough. 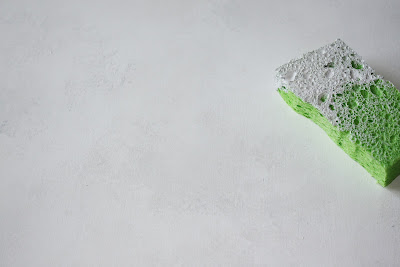 The I used an old trick my mom used to do when she was tole painting with the church ladies in the 80's. I flicked paint with an old (washed) toothbrush. I liked the speckled look. 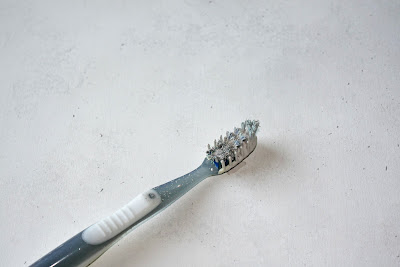 Then I used a small pointed paint brush to draw on some veins. 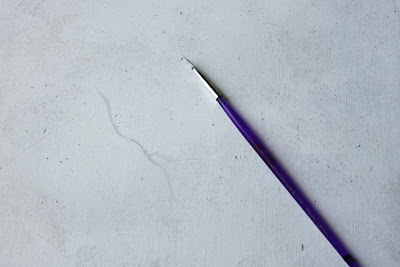 Because I wanted it as smooth as possible to resemble a real polished stone counter top, I lightly sanded it again.
I then installed it. I used liquid nails all along the top of the vanity and then just laid the counter top on. I let it dry and then it was time to seal it. Because it was white I needed to use Polycrylic. According to Minwax Polycrylic doesn't yellow like Polyurethane can. I have never used it before because it is notorious for being streaky and it was for the first 3 0r 4 coats. But after awhile it evened out. They key is to use a FOAM brush. Don't use a regular brush or you will have lines from the bristles. I ended up using the whole can which was 8 or 9 coats. You need to lightly sand in between each coat with a fine grit (150 or 220) sandpaper so each layer with stick to each other. 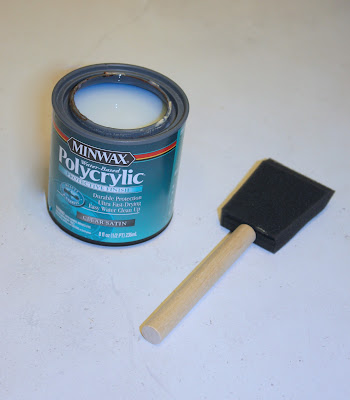 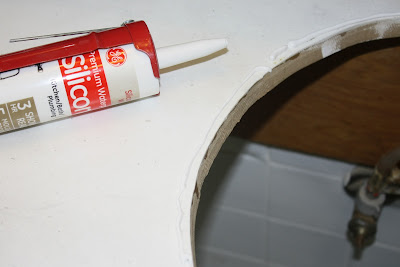 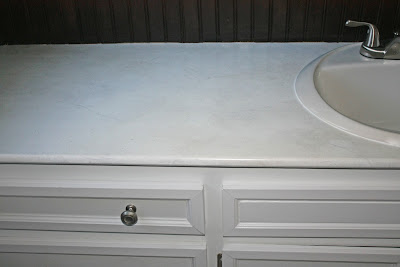 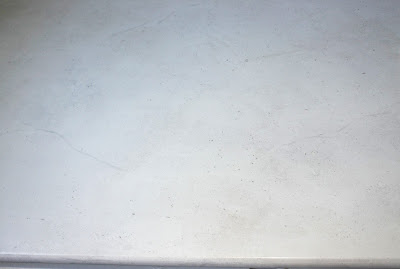 I know that this is just a temporary solution, but I really like how it turned out! I don't think I will have a hard time living with it until I can get the real thing.

***UPDATE*** Shortly after installing this counter top one of my boys flooed the sink and we didn't discover it until the morning. It hadn't fully cured and so the water got to the MDF. MDF expands when wet and doesn't flatten back out. If I were to do this again I would have used plywood or something else other than MDF.