I used to have a birthday blog. But then this blog took off and the birthday blog domain was stolen, so I shut it down. I still get emails about the cakes I did so I am transferring the cake tutorials here :) 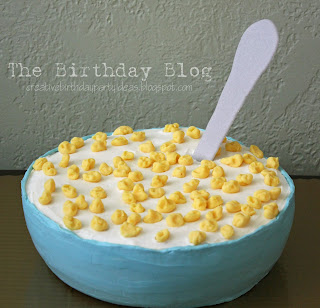 I was asked to make a groom's cake for a wedding. The guy is OBSESSED with cereal. As in he eats it for breakfast, lunch, and dinner. Hopefully that will change now that he is married  :)
Anyway, I don't like to use fondant because I think it tastes nasty. I want my cakes to look nice, but I want them to taste good too. I am not sure what kind of a party this would go with. . .  sleepover maybe??? Or maybe for a kid who is obsessed with cereal too! I don't know. But here it is any way.
I was so super stressed about this cake that I forgot to take pictures of how I made it. I doubled my cake recipe. Everything BUT the sugar. So I had to make a new one and was up until 3 am. I baked the cake in a large sauce pan because I didn't have a glass bowl large enough. The pan had tapered sides like a bowl so it worked. The "cereal" is white chocolate. I melted down some white chocolate chips and added food coloring to them. I spooned the melted chocolate into a baggie, cut off one corner, and dropped it into some ice water. To see what the heck I am talking about, see my popcorn cake. I have pictures showing the process. Make sure when you take the "cereal" out of the ice water that you put them on a paper towel to dry so they don't get sticky.
To make the spoon, I did the same thing with the chocolate chips. Melted them, added black food coloring, put it in a baggie, and cut the corner. Then I squirted it out onto wax paper into the shape of a spoon handle. I did the same thing with my tea pot cake.
I just had another idea! Yep. Right now as I was typing :)  Instead of making cereal, you could squirt the letters of the alphabet and make it alphabet soup! ( I am totally humming "Animal crackers in my soup") That would be cute for a toddler's ABC party. I have one in the works. Yeah! Now I have a cake idea.