It was a warm sunny day in Las Vegas and I had just spent an hour next to a very chatty man (who thought he was hilarious) on the airplane.  I was rocking my first pair of colored skinny jeans (heck! my first pair of skinny jeans period!) and I was feeling good. I walked into Mandalay Bay to be greeted by a sea of orange. The Home Depot had descended upon Vegas for their annual Managers Meeting and I was about to get a behind the scenes look!

While the 3,000 some odd Home Depot store managers from around the world were in a meeting, I was able to sneak into the "product walk" as they call it. They basically build a Home Depot store inside the event center, only it is a Home Depot store times 100! It was HUGE! Talk about feeling like a kid in a candy store. 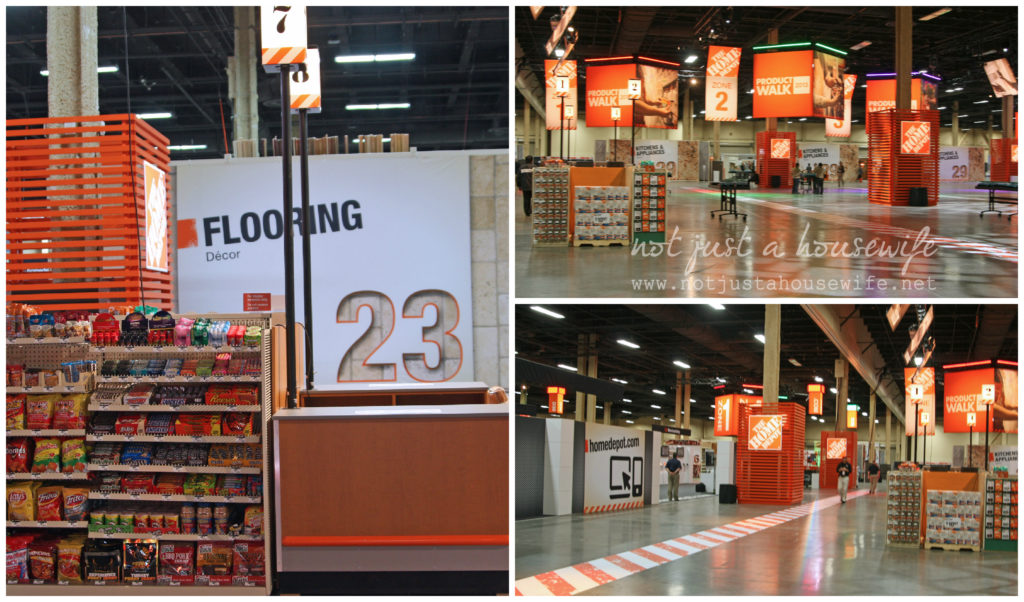 The product walk was set up so that the store managers could see all the new products. The reps from the companies taught, and answered any questions about the products. This way when people come into the stores, they will be educated about the product and will be able to give the best service. There were so many booths that it takes two days to visit them all! Some of the CEOs for the brands were there as well. That was really neat to see how proud they were of their company :) 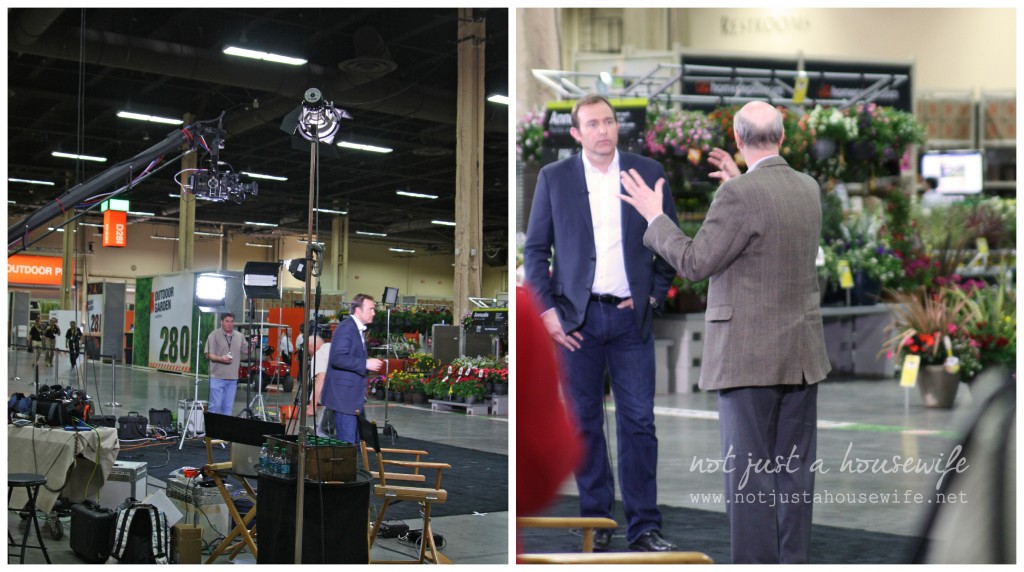 (LEFT: CNBC setting up for interviewing the CEOs and Martha Stewart RIGHT: Frank Blake being interviewed)

My favorite CEO was there too. Frank Blake, the CEO of The Home Depot, came to speak to the managers and check it all out. This is the first time they have let the media come. It was CNBC and..... me! In fact, I had to sign a confidentiality agreement. Good thing I rock at keeping secrets :) Oh, and there is a Frank story later....... because I can't seem to travel anywhere without embarrassing myself, right? 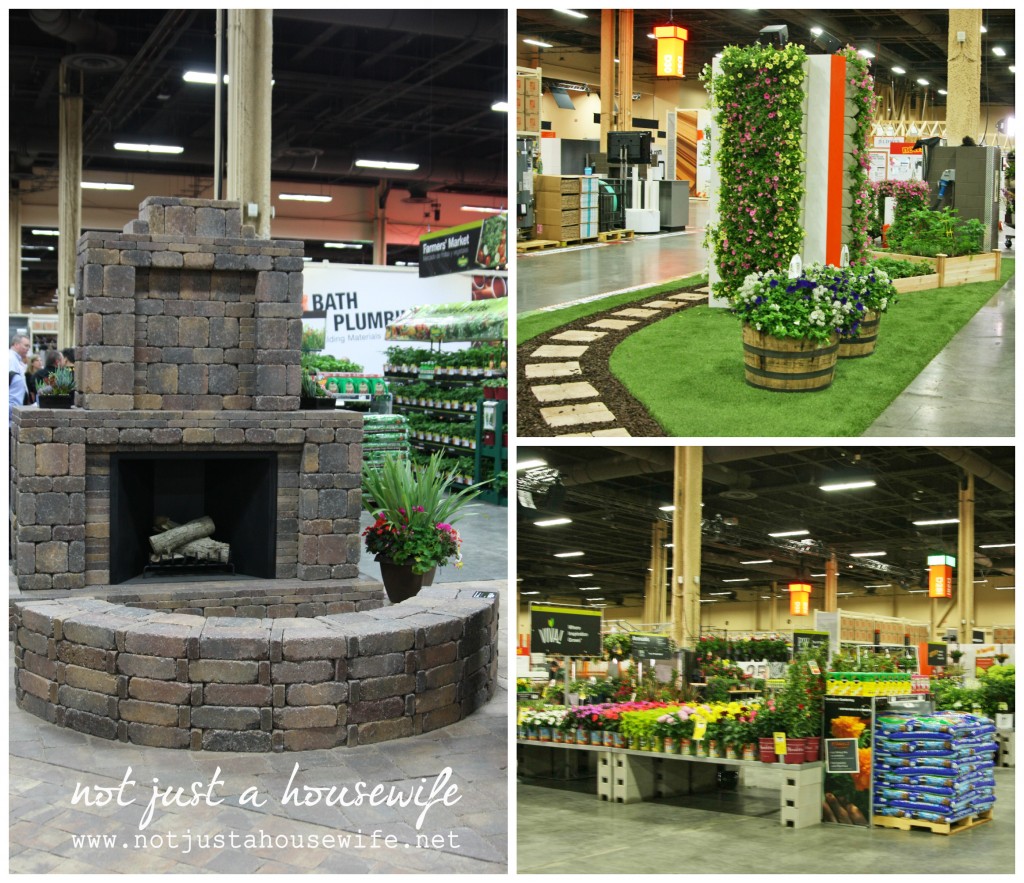 The garden center was one of my favorite areas. It smelled amazing! And I love that everything here (in fact all the products in this whole HD convention center) were donated to local charities after the event was done. 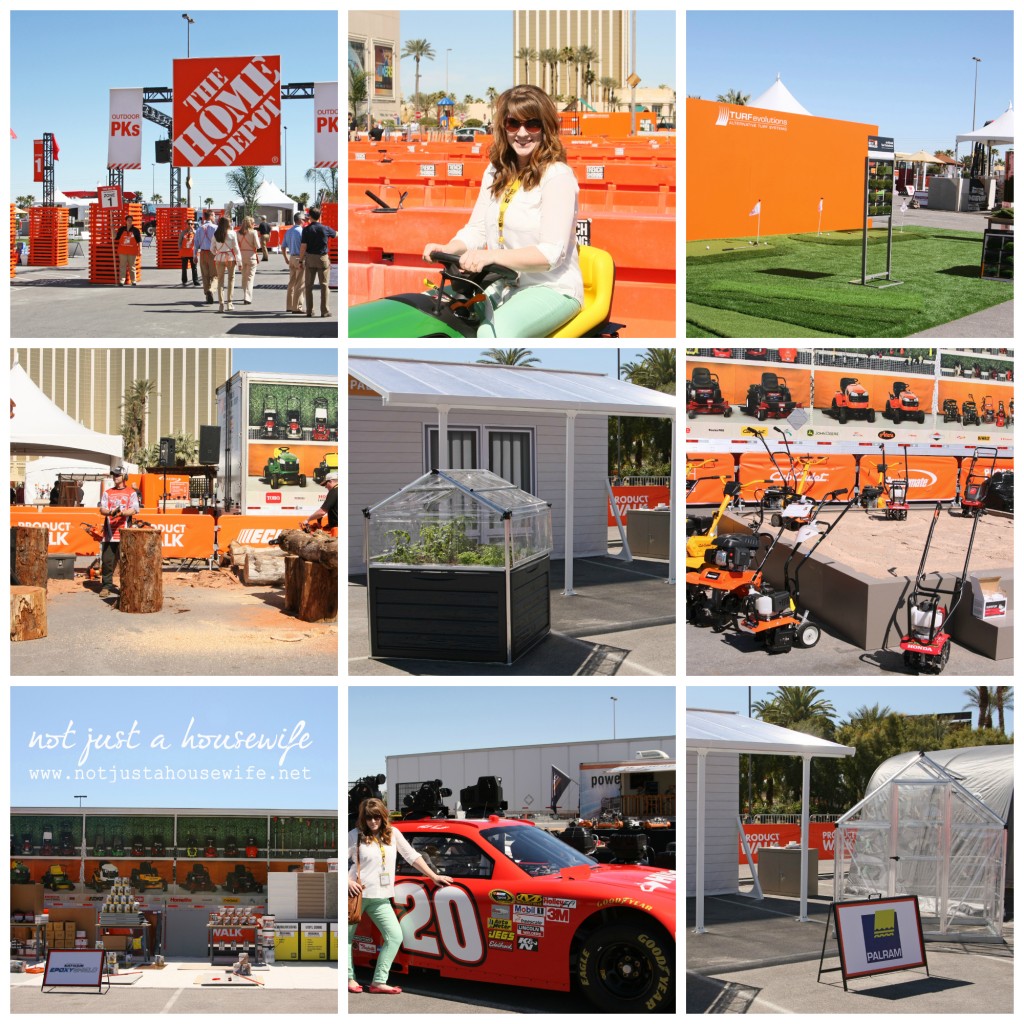 The convention center wasn't big enough so they had to take over a whole parking lot as well! They had hands on booths and showcased products that are online only. It was fun to see things in real life that normally I browse for on their website. 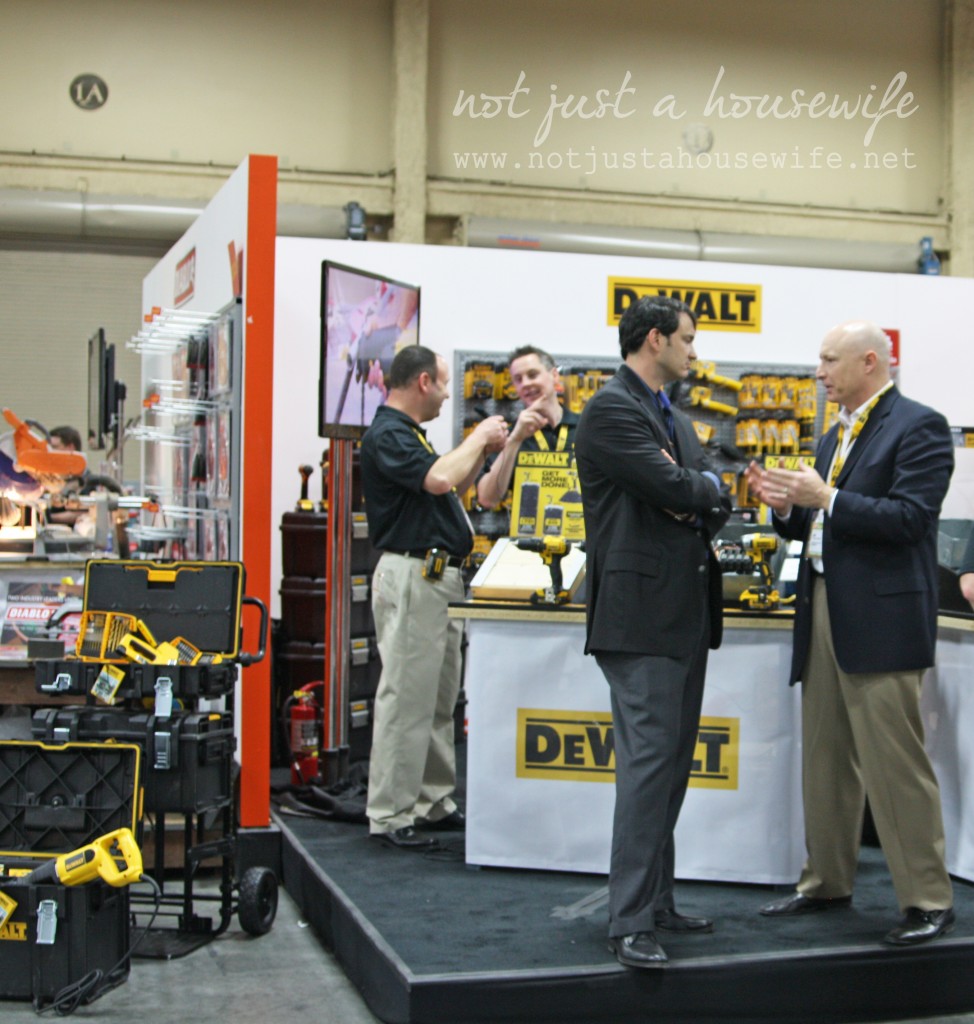 And of course there were plenty of power tools :) 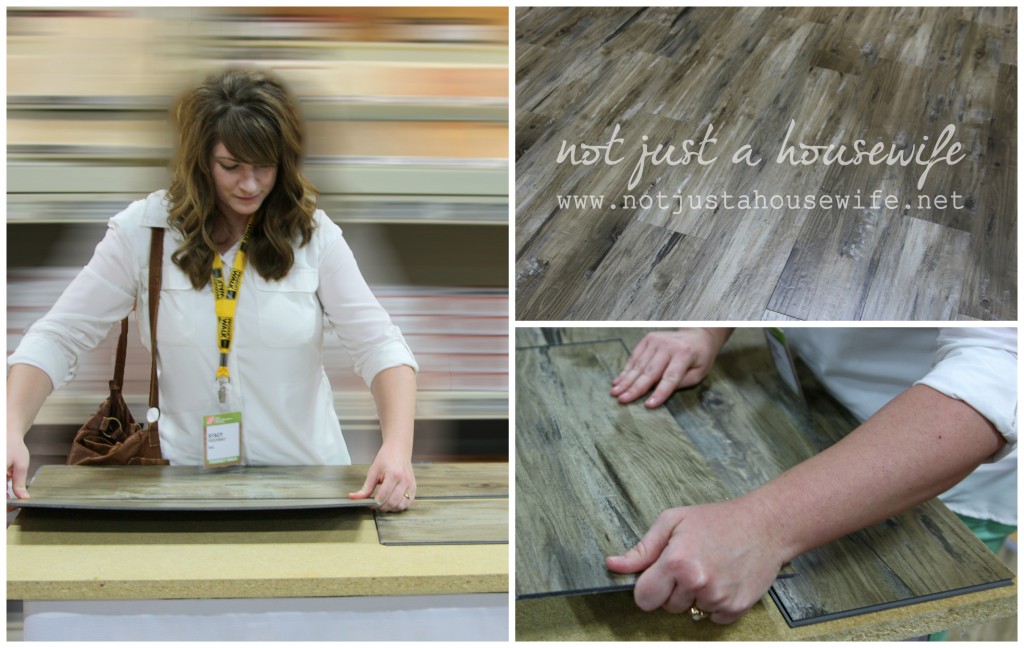 And I  learned about some awesome flooring and tried it out. It was stunning! This color in particular will be coming out later in the year and I am trying to think of where in my home I could put it. 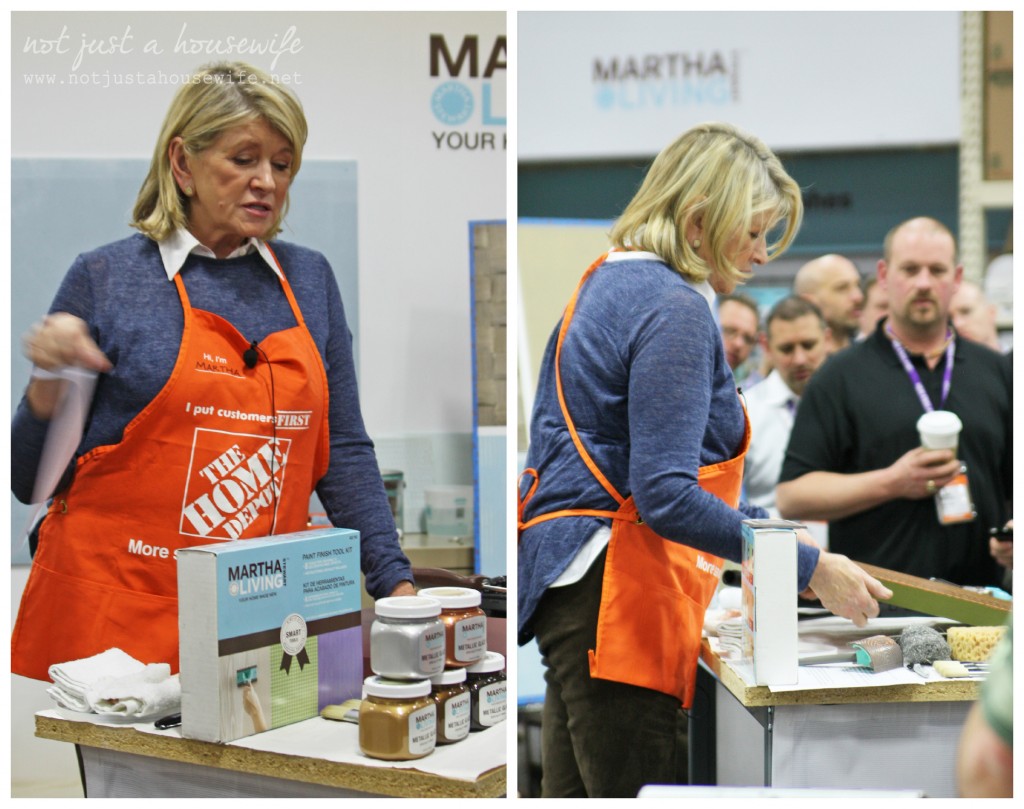 And guess what? Martha was in the HOUSE! She was interviewed by CNBC and then demonstrated her new line of paint. I had the chance to meet her and visit for a minute. 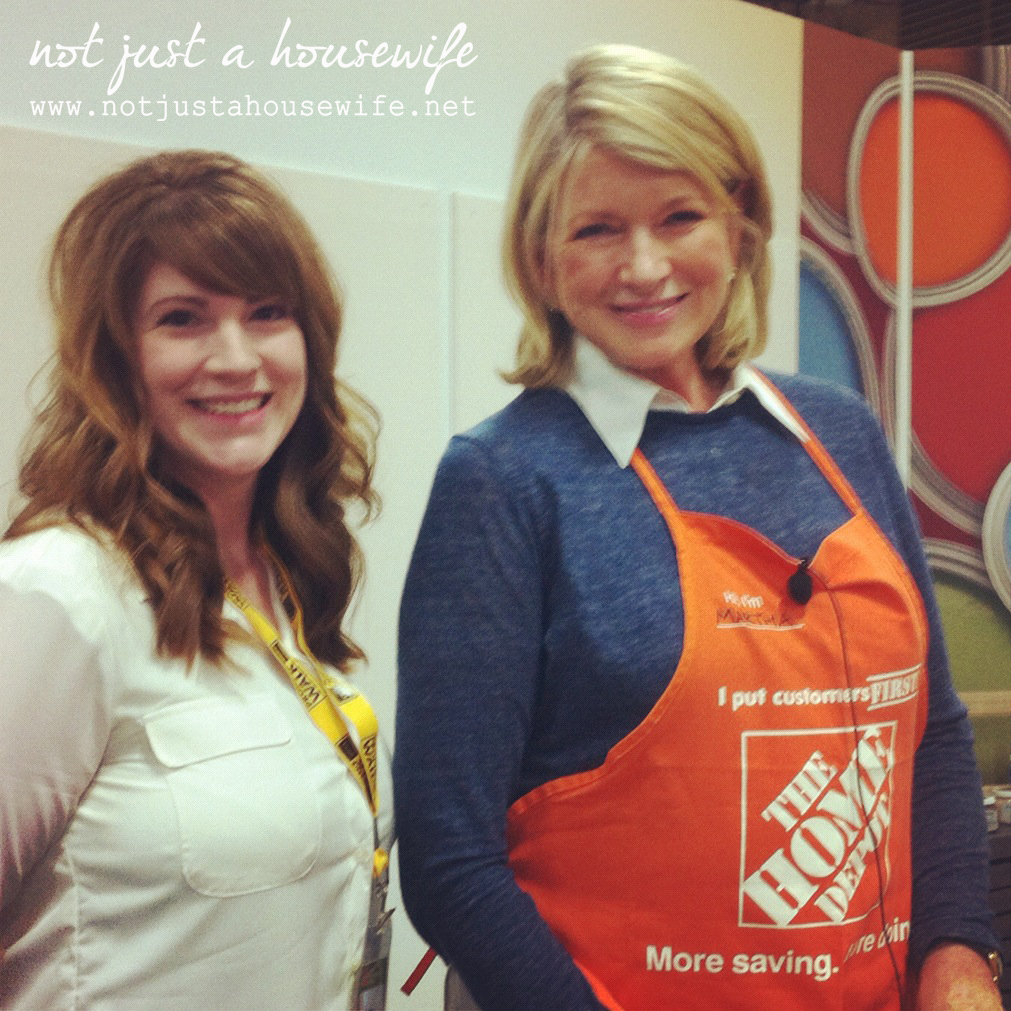 Martha is amazing at personal branding and has mad business skills. She is the best at what she does. And it is a notch in my DIY belt to say I have met her.

The whole day was fabulous. Insider Home Depot secrets, creme brulee for lunch, hanging out with my favorite PR girl Kelly, Martha, and sunshine pretty makes for a perfect day. The best part for me was being surrounded by people who were so full of excitement that it was almost tangible. There is an energy that is indescribable when you are in a room full of passionate people.

So as the day was wrapping up, I still had not had a chance to talk with my buddy Frank. I had met him at a previous event and was excited to see him again. He is seriously the NICEST guy ever. He had taken off after the interview with CNBC and was walking around like everyone else. We had the event planners with their walkie talkies trying to spot him for me. Finally right before I was about to leave Kelly and I spotted him.

Insert random fact....... I am a hugger.  I like to squeeze the crap out of people when I am excited to see them or meet them.  I didn't hug Frank Blake the first time because no one else was and I was so shocked to be actually meeting him. But I figured that since it was our second meeting, a hug was warranted. And really, I think he went in for the hug first.

Well, after chatting a minute it was time for me to go back to the airport. On our way out of the event center we saw the event planner. She was standing next to a guy who looked familiar but I didn't think anything of it.  I told her we had found Frank so she wouldn't have to keep looking. I told her he had recognized me and we hugged.

Her eyes got huge. She looked to the man at her side (who turned out to be Frank's personal security) and said "Is that even allowed?"

I am so excited about the things that Home Depot is doing this year. And I am excited to be able to share more behind the scenes stuff with you later. Thanks for letting me share!