My 10 year old son's room I decorated has been complete for awhile but I was waiting until I was done posting about my secret garden before I posted about it . It was just a mini makeover since he really wanted to keep the striped wall the way it was.He knew he was getting a new bed but he thought that he had to wait until this fall for his birthday. He is such a good helper with his brothers that my husband and I wanted to surprise him and do it early. We told the kids they got to have a sleep over in the family room and as soon as they went to sleep we went to work!

Here is a reminder of what it looked like before as the nursery..... 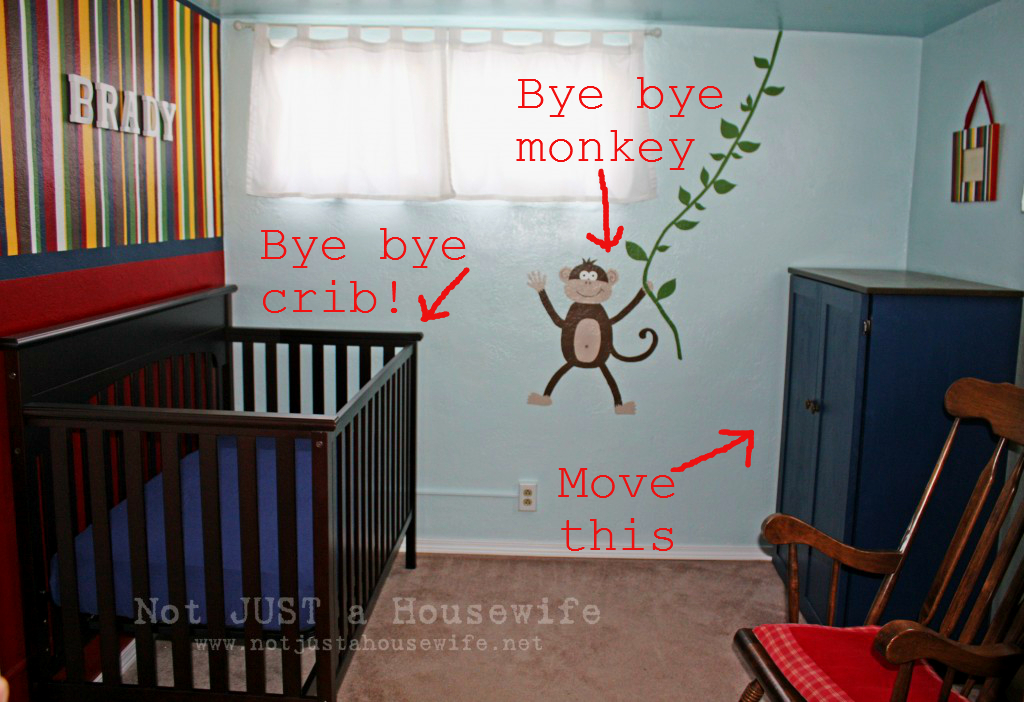 It is a small space. Really small. The room itself is about 10 feet by 21 feet.   But just this end of the room is designated as his. The other side of the room has the bunk beds with a trundle, a dresser, and the closet.

But we managed to to fit everything on his wish list into the 5 ½ by 10 foot space :) 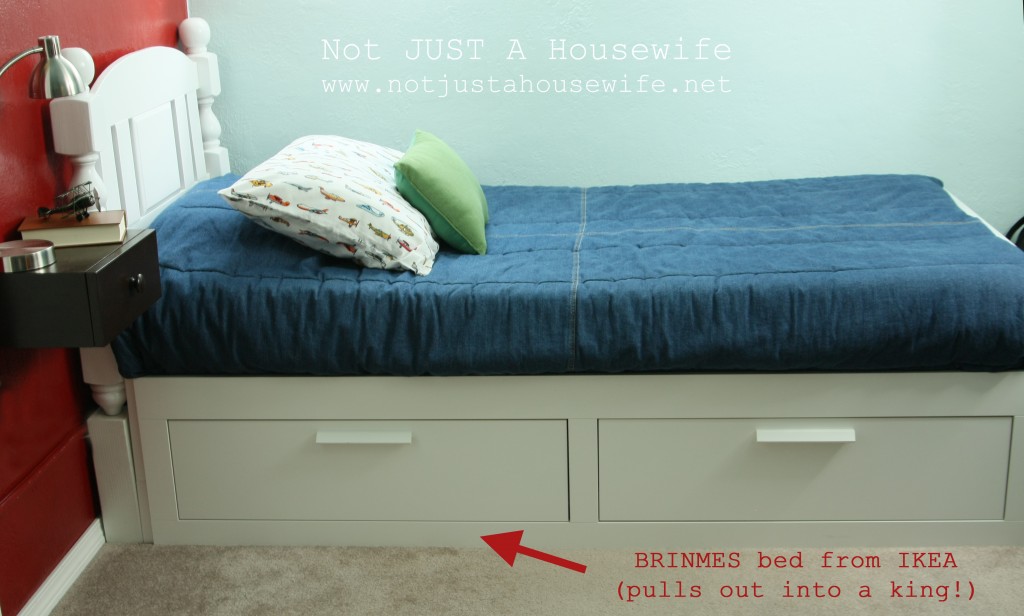 Since the bed is the main thing in this space lets talk about it first, shall we? I {heart} it. We got it from IKEA. It is called the BRIMNES Daybed. Not only are the drawers huge and can fit all of my kids' jeans (yep, all four boys!) but it has a secret..... I LOVE furniture that can do double duty!!!

It can pull out and become a king sized bed!!! Just look.... 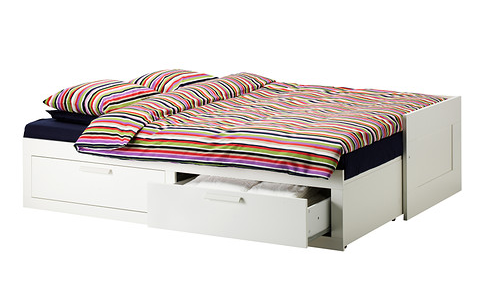 We brought home 2 mattresses from IKEA. Right not they are stacked up on top of each other and if we slide it out to use it as a king, we can just put the mattresses next to each other. Isn't that genius!   As a person who lives in a small home with a lot of people, I appreciate that IKEA makes furniture like this. They rock when it comes to maximizing space. This bed would be great if you did not have a guest bedroom. You could use it when company comes :)

I gave the headboard a makeover about 8 years ago when we were living in Las Vegas. We were given a bunk bed from the 1970's for free from some neighbors. It had seen better days. It also came off a little to feminine. So I made some alterations. I used a jigsaw to round the top and I replaced the spindles with 1x4 boards. I primed and painted it. When we moved here, the headboards and foot boards got put into the garage and forgotten. Since we were trying to do this bedroom as inexpensively as possible, I decided to reuse one of the headboards. My son was excited because he could remember having it a long time ago. 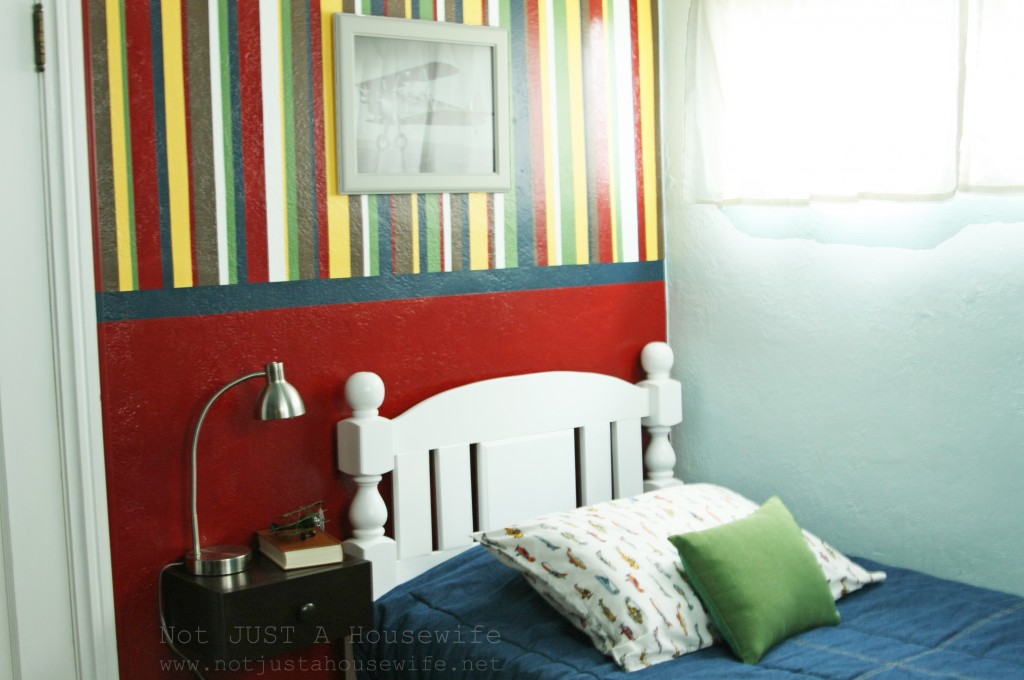 Another thing on his list was a side table with a lamp. I had built another side table like the turquoise blue one in my tutorial from last year, but then realized that "DUH!", the bed has drawers. Whoops!

So I had to come up with another idea.

I made a floating side table with a drawer! 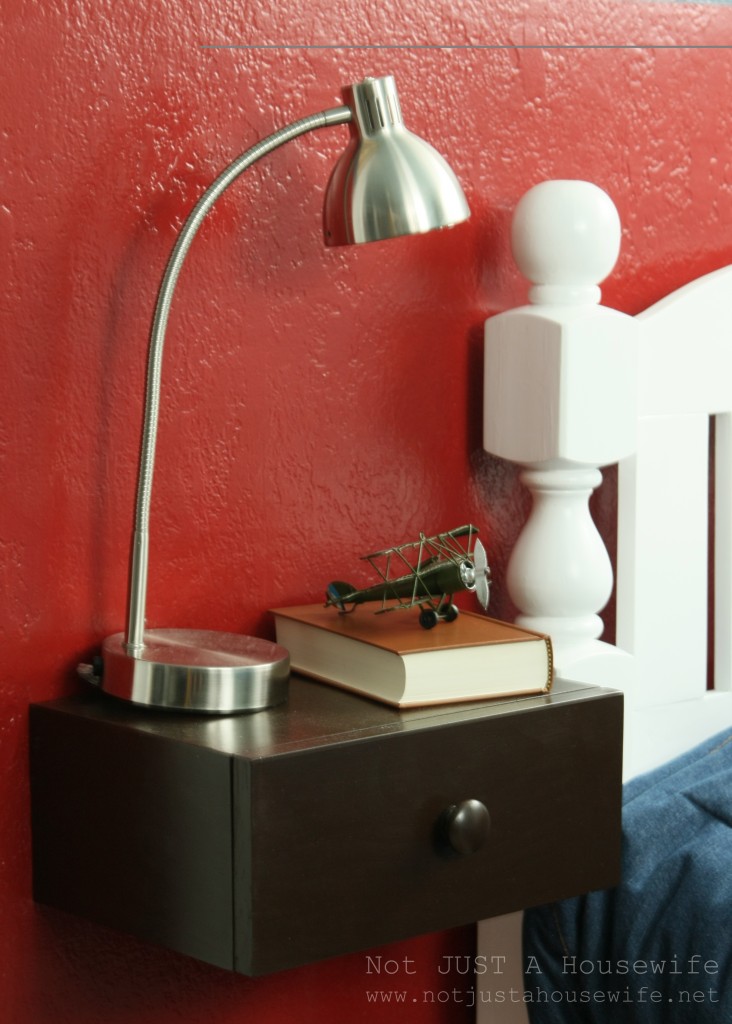 (I am not sure why my pictures randomly upload with a grey line across them. Grrrrrr!)

Here is the tutorial on how I made it. It was very simple!

The lamp on the table came from Wal-Mart. We got one from IKEA, and it would have worked, but since I didn't use the original table (which was bigger) the lamp didn't look right on the smaller floating side table. So I put it on my office desk! And I am kind of glad it worked out that way :) 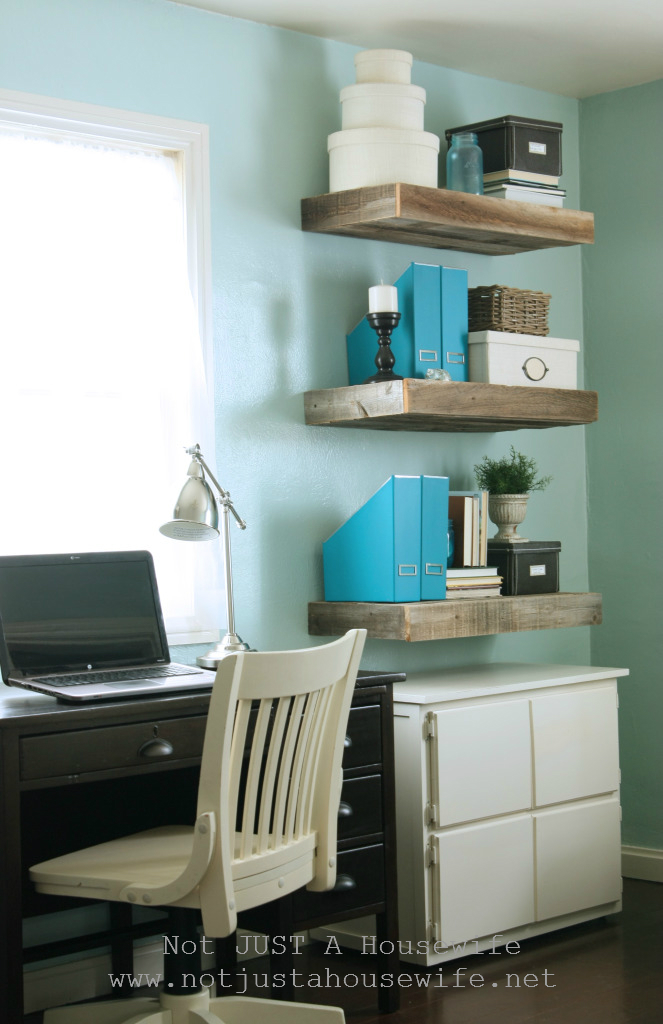 It is called the Barometer Work Lamp. Man, I just love it! 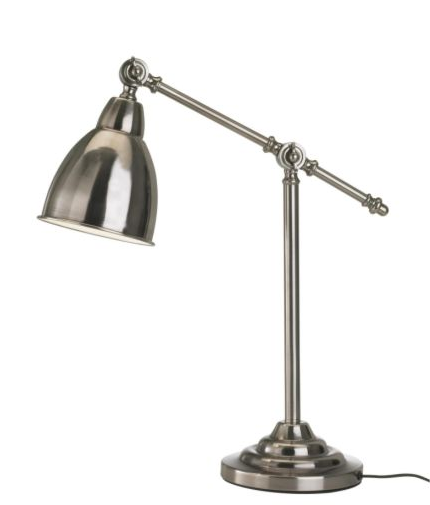 Another thing on my son's list was he wanted some shelves for books and his favorite things. We have never had shelves in the kids room so they have never been able to really display anything in there. 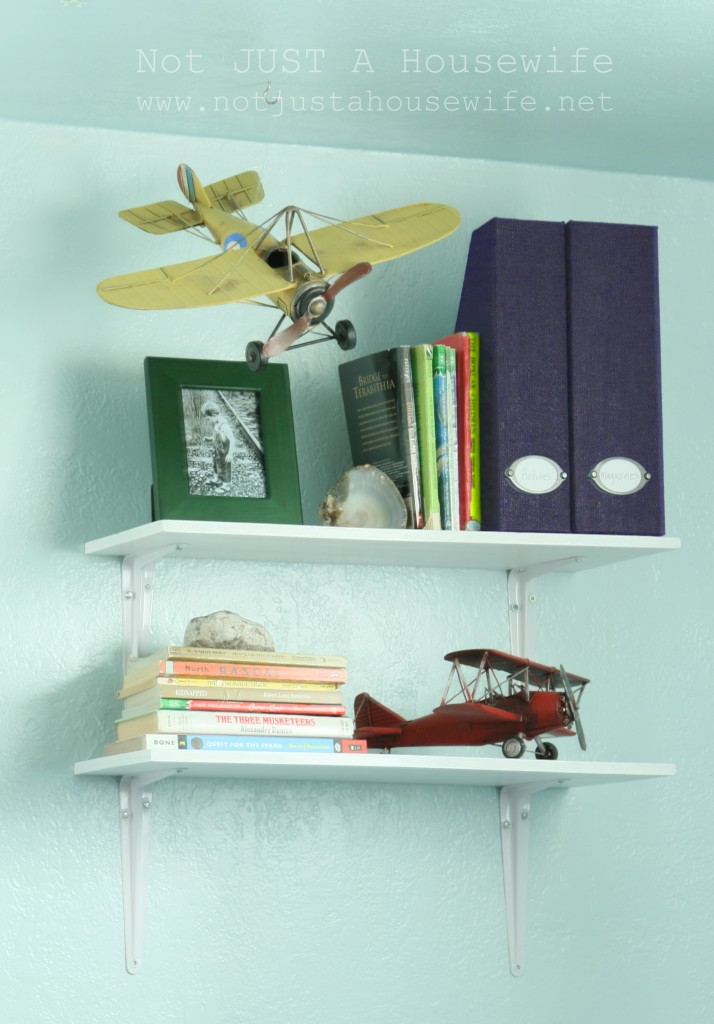 I made three shelves. And I was about to hang the third one when I realized that my 2 year old would be able to reach/climb it. I held off. I may hang it later on, or maybe not. Either way my son is thrilled to have some shelves. And all it took were som scrap pieces of plywood and shelf brackets from Wal-Mart :) The planes are from Hobby Lobby (thanks to the 40% 0ff coupon). And the magazine holders are from IKEA. They are covered in navy blue burlap. Here is a close up shot since mine is not super close. 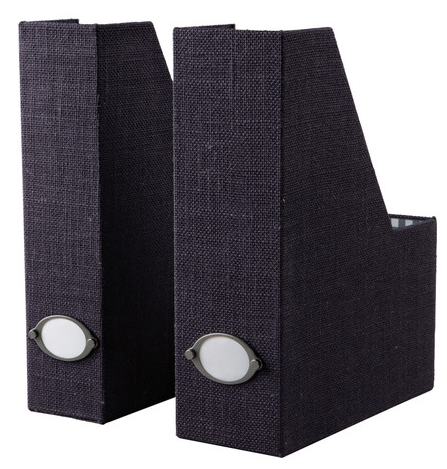 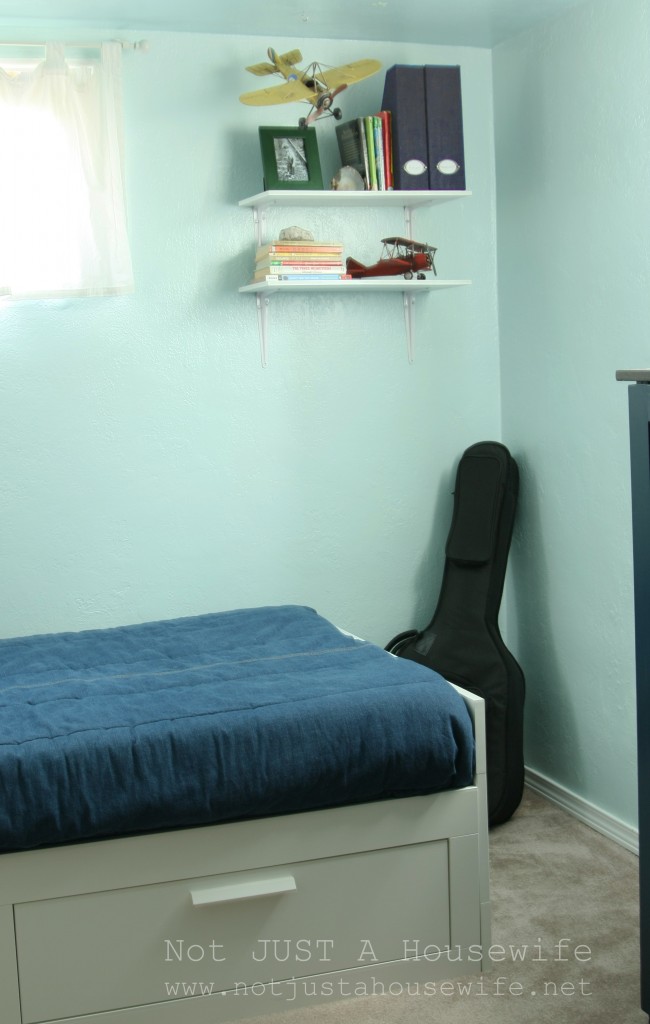 The space at the end of the bed is perfect for his guitar and the stuffed animals that he is *almost* too old for but doesn't want to give up just yet :) 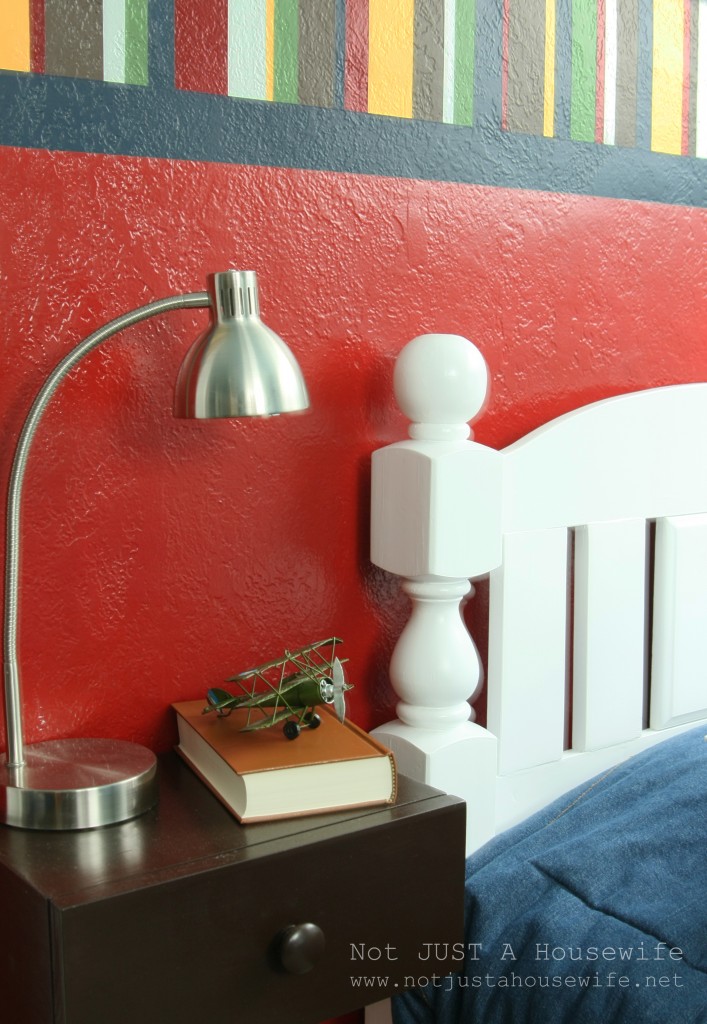 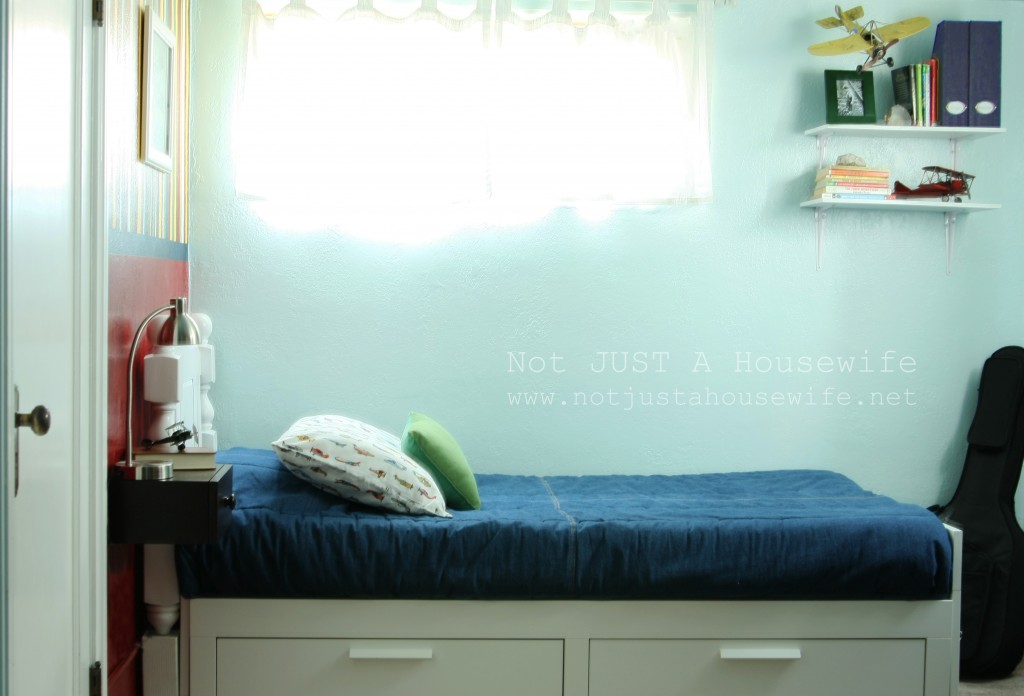 The picture frame is from IKEA. The print I found online for free and had it printed in black and white.

It was a simple change from nursery to 10 year old space. He wanted airplanes and I could have easily made it cutesy by adding a lot more airplanes, a mural, or maybe an airplane shaped pillow for the bed. But he is ten. I wanted it grown up enough with out being a teen room but young enough because he is still a kid. I think we found a good balance.

I want to thank IKEA for providing the items for my son's room. I also want to mention that Sharee from the bedding department in the IKEA Draper store totally rocks! She has amazing customer service skills and an upbeat personality.

The new IKEA catalog is out and it is my favorite one so far. I love that they not only show their products and how they look all together in a space, but they show you tips about painting their furniture, covering things in fabric, etc. They understand that us DIYers want to customize our spaces and furnishings.  You can get even more ideas from their blog as well. Just a warning if you visit the blog.... you may get sucked in and all of a sudden look at the clock and realize it is dinner time. Not that has happened to me or anything *wink*.

« What in the world is Fish Foam??? {and a cute little video}
Floating Side Table »