My son wanted either a jungle party or a safari party. Since we didn't have our yard put in yet any all the weeds were yellow and dead, it made more sense to have a safari party. I sent out invitations that looked like airline tickets. It was his 7th birthday hence the 7 years of flight. The Departure gate was our address ( I removed for safety reasons, along with his name). I also gave them a passport. On the inside were some blank white pages. I told them they needed to bring both of these to the party. 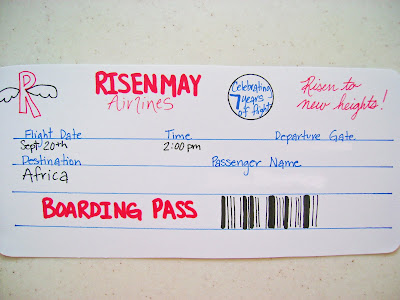 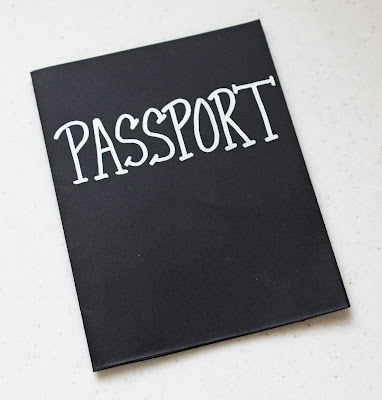 He wanted a lion cake. It doesn't get much easier than this! 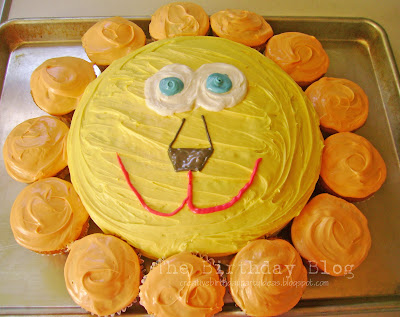 When the kids arrived I was waiting for them on the porch. I had a desk set up and I was there to check them in. I stamped their passport and gave them a malaria pill ( M&Ms in a prescription bottle) in preparation for our little trip to Africa. They then went inside where my mom was waiting for them. She dressed in a navy suit and had on a name tag with the Airline logo on it. I wanted it to seem like they were on a plane. I had chairs set up in rows and we even had an in flight movie showing - Lion King. They watched this while we waited for everyone to get there. I used a cardboard box and one of our DVD players out of our van. I had a baby monitor receiver hidden. My husband was downstairs where the monitor base was. He spoke in his best pilot lingo telling the kids that is was time to land and that the flight attendant would help them exit the plane. (walkie talkies would work as well) The kids were amazed and I have to admit that it was probably my favorite part of the whole party. 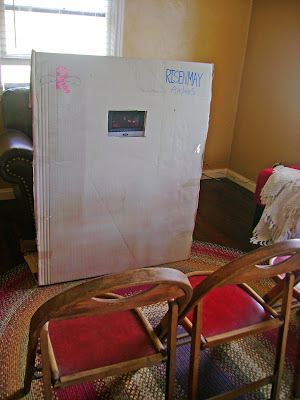 We left the front room and went into the dining room that is attached to the kitchen. I had an extra table set up. School had just started so I thought it would be fun to make a charm to hang from their backpacks. We used Shrinkie Dink to make them. If you have never used it before you are missing out! It is the coolest thing ever. You can buy it at Michael's or Robert's craft or directly online. It comes as thin plastic sheets. You draw on it using permanent markers, cut it out and bake it in the oven for a couple minutes and it shrinks! It also becomes thicker. The kids got a kick out of watching it too. To make things as easy as possible, I had drawn different safari animals on paper. I cut the shrinkie dink sheets in half. Then they taped (so it wouldn't slip) them on to whatever animal paper they wanted and traced it. I had a lot of different colored markers for them to color them. My mom and a friend helped me with this because some kids needed help cutting the animals out. We hole punched them so we could fit a metal key chain ring through it later. 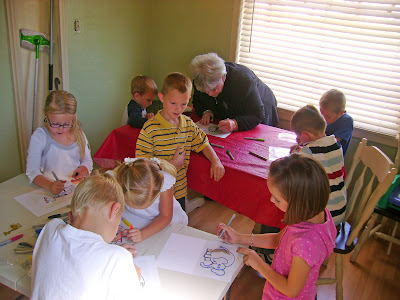 When we left the kitchen area we went outside. We gave them a safari hat and binoculars, both of which came from Oriental Trading.

We had elephant races. It is called that since elephants hold on to each others tails when they walk. You will probably understand it better from the picture than from a description. We had two teams. They raced from one end of the yard to the other and then back again. It is hysterical to watch!!! 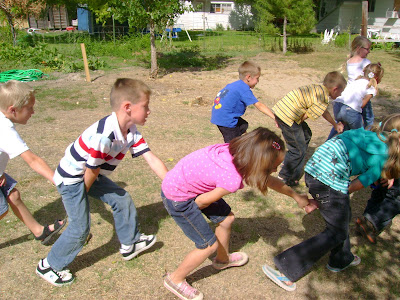 The last game was going on an animal safari. Ideally, I would have used a four wheeler and a trailer decorated like a safari jeep to take them around the yard where the cardboard animals were hidden. But I didn't have access to a trailer. So I made up clues by describing the animal. They had to look around the yard to find that animal to get the next clue. At the end were gift bags full of plastic safari animals and treats. I got the animals at Wal-Mart in their cheap toy isle for $1.88 a bag. I bought a few bags.