For the invitations I ordered these message in a bottle invites from Oriental Trading. It came with sand but I chose not to add that. I figured the moms wouldn't be too happy to have it spill all over their floor (Oh you know it would have too!). After we added the invitation to the bottle there was a cute label that came with it that we wrote the child's name on. 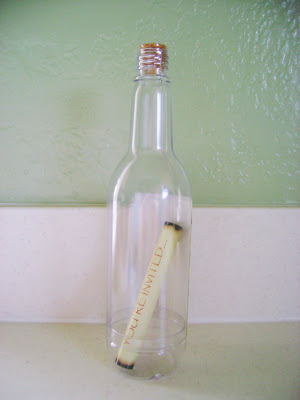 I love to have the birthday kid dress up to match the theme. It sets them apart and makes them feel special. And isn't that why we have these parties anyway? I bought an over sized green tee shirt at Wal-Mart. I think it was $3.00. Then I cut the bottom so it was jagged. We used black pants and a belt. I made a hat out of felt. I used fabric glue since I am a novice when it comes to sewing. I happened to have a red feather in my box of tricks but you could easily make one out of paper. 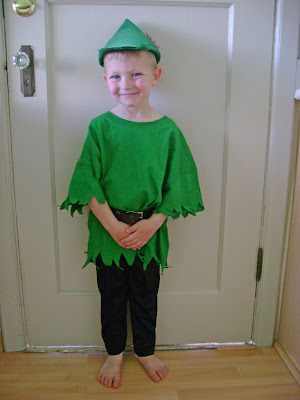 For the cake I made a crocodile. The whole reason we even had a Peter Pan theme was because he loved the crocodile. For more info on how I made this cake click on the crocodile cake link on the side bar. 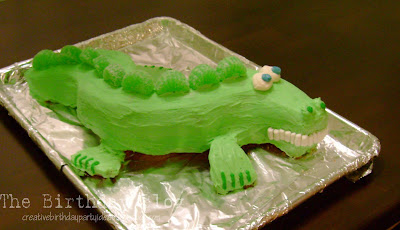 I set up my backyard to look like different places in Neverland. The first place we went was the Lost Boys Hideout. I used a big cardboard box to surround a pine tree. When we went over I opened it to reveal the game. We played pin the tail on the lost boy. 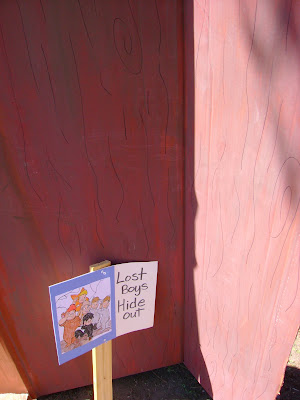 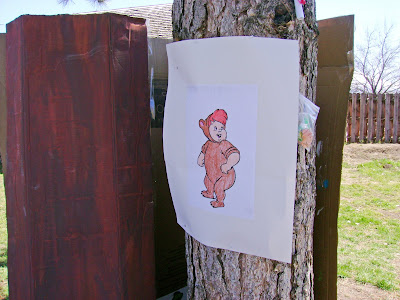 Next we went to the Indian Camp. I had made a tee pee using a painters tarp and some 1x2 boards. When I started I really had no idea what I was doing. I started with the boards and some rope. I tied the tops together going over and under and through. There really wasn't any rhyme or reason to my method. Then I draped the cloth over. I had to use a needle and some embroidery thread to "sew" the cloth onto the boards. I just did a stitch here and there. Nothing major. I am sure there are easier ways to create a tee pee. But as the mother of 4 boys, I wanted something that would last so we could play with it for a long time. We put old shirts on the kids and let them paint the tee pee with poster paint. I bought big paint brushes for very cheap at the craft store. 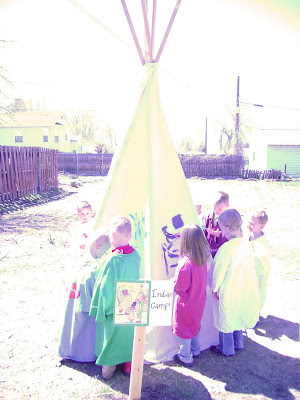 After that we went to Pirate's Cove to play the cannon ball toss. I used black balloons filled with water for the cannons. I didn't fill them up all the way because I didn't want them to pop very easily. I had control over the tote of cannons so it wouldn't be a free for all. They then were split into 2 teams. They had to throw the cannon balls into the buckets. Which ever team had the most in their tote won. They loved this one. I told them after the party was over they could come back and try to pop the balloons. Since we hadn't put our yard in yet it wasn't a problem. 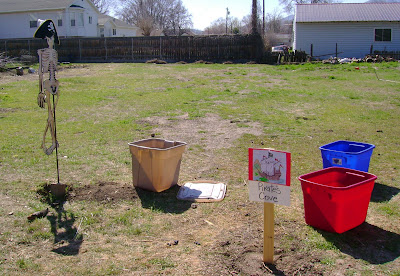 The last place we went was Crocodile Creek. I told them that the pesky crocodile had eaten the treasure and we had to get it back. I ended up making my pinata because I waited too long to order one from online. It defiantly ended up being cheaper, but was kind of a pain to get it the right shape. I am a fan of homemade pinatas. The only reason I was going to order this one was because of it being so difficult to make. I used balloons, toilet paper cardboard rolls, and egg cartons to achieve the finished product. (I paper mached over them, of course) 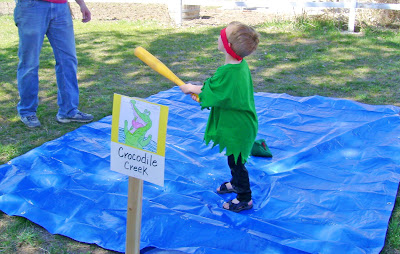 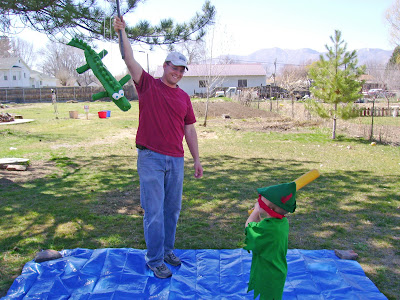 It was a fun party for a little boy. If you had girls attending or the party was for a girl, you could include Tinkerbell, the Mermaid Lagoon (some sort of water game), and Wendy's bedroom ( story telling area).