My son has been convinced ever since he got a cowboy hat for Christmas that he is a real cowboy. He’s been on a big cowboy kick ever since. So it was no surprise when he wanted a cowboy party. For the invites I made these wanted posters. He calls himself Cowboy Tuff, and yes, he spells it that way. I took off his first and last name for safety reasons. I did say (first name) “The Tuff” (last name). 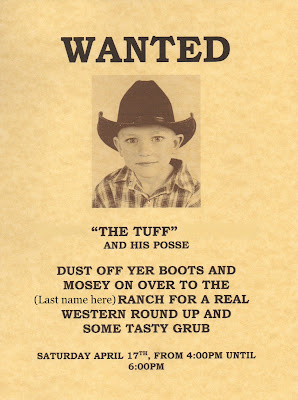 He wanted a boot cake so this is what I made.  For more information on the cake click HERE. 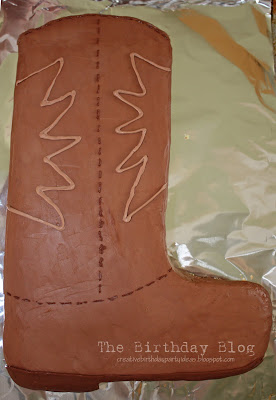 Pretty much everything that I buy for parties comes in a pack of a dozen. So that has become the standard number of kids I have at our parties. We gave them all Cowboy hats from Oriental Trading and red bandannas. They were surprisingly inexpensive. It was the cutest thing to see all these cowboys running around the yard!
I split the kids into three groups. Then we rotated through three stations. One of the stations was target shooting with water guns. I used plastic cups but I would suggest paper because they are lighter weight and would knock down more easily. 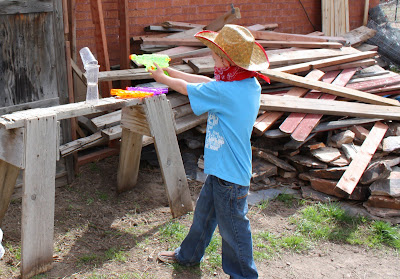 Another station was where they learned to lasso. I had a toy horse but you could use just about anything. It was so cute to see them get excited when they “caught” the horse. 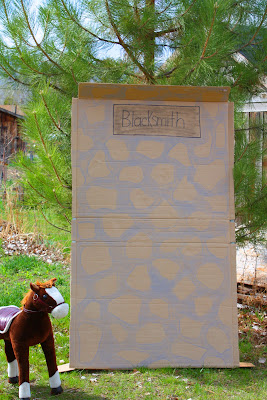 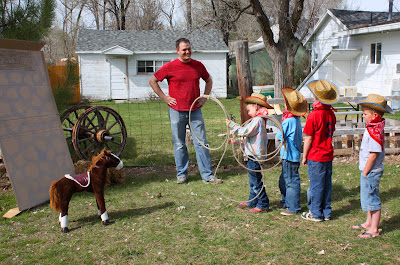 My favorite ( and the kids’ favorite) one was panning for gold. I had one of those small plastic pools that sell for about $10.00. I filled the bottom with sand from our sandbox. I bought a small bag of brown fish tank rock. I painted about one cup worth with gold paint. I dumped the painted and unpainted rocks in the pool and then filled it with water. The kids used those disposable pie pans that come in three packs from the grocery store to pan for the gold. I had bags with their names on them for the kids to put their gold. Holy cow! I never could have imagined how popular this would be. I had kids in my backyard for the next week panning for gold. I bet they found every single piece too! 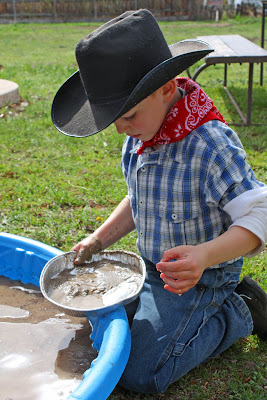 After the groups had rotated through all the stations we headed over to the trading post to cash in the gold for prizes. I had planned on having more options for the kids but ran out of time. I had just had my fourth baby right before the party and I just didn’t get some things done. I had balloons, sheriff badges, a cowboy magnet game, and candy bars. The badges and magnet games were from Oriental Trading.I wanted to have, but didn’t get to, some no bake cookies in baggies labeled “cow pies” and some of those speckled malt eggs (Easter candy) in a baggies labeled “rattlesnake eggs”. 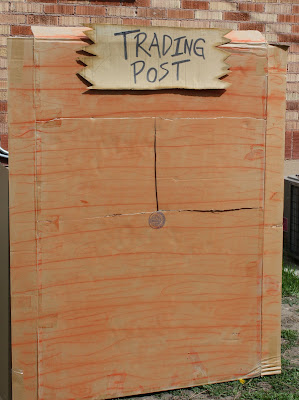 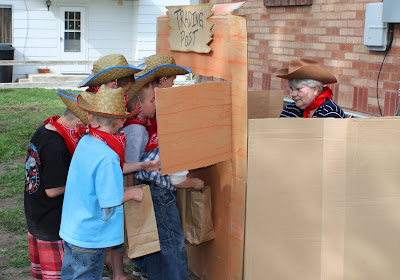 My cute mom always comes and helps out at my parties! Have I mentioned how important it is to have lots of help? 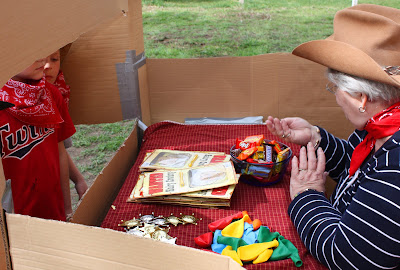 After the trading post we roasted hot dogs for dinner. A BBQ would have been fun too. 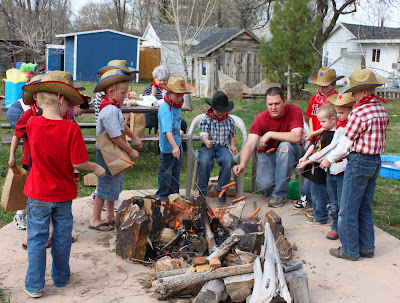