I have a pretty spectacular DIY to share today but I am not the creator. My son built this DIY wood canoe in his high school shop class! No one has ever attempted a project like this before. He had to create the plans himself. He designed it and figured out all the measurements. That alone impresses me because.....math. He had watched a time lapse video on YouTube of a man building one from a kit and was able to figure things out based on that. Kits are about $300 for the wood alone and my son A) didn't want to spend that much and B) really wanted to challenge himself to cut everything himself. This DIY wood canoe cost him just over $300 including the fiberglass cloth, epoxy, bolts, and lumber. The fiberglass cloth and epoxy were more than half the cost!

He started by making a mold out of OSB and plywood scraps. Then slowly, strip by strip, he started gluing it up. 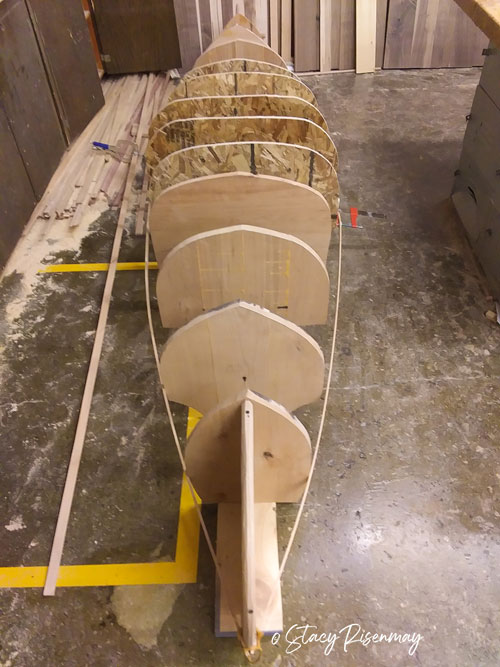 Cutting all the strips went surprisingly fast but the gluing took months. Especially since he could only work on it every other school day for about an hour. 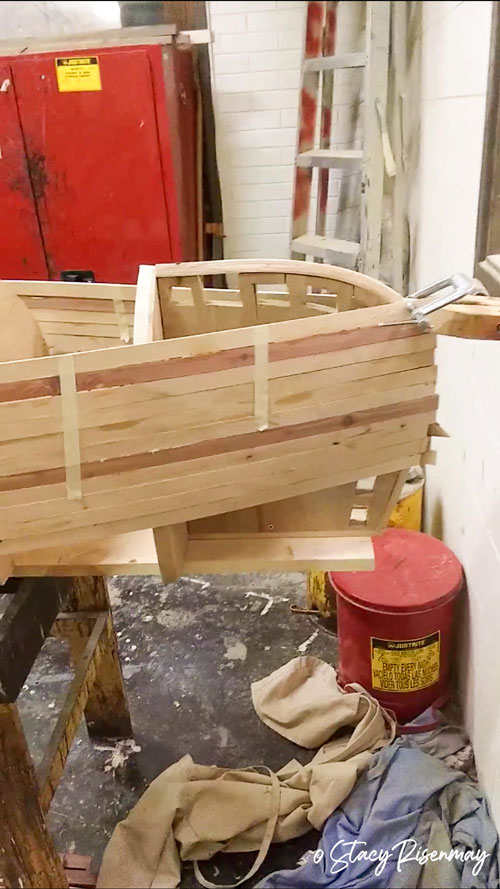 I remember him coming home so excited because he finally got started on the bottom :) 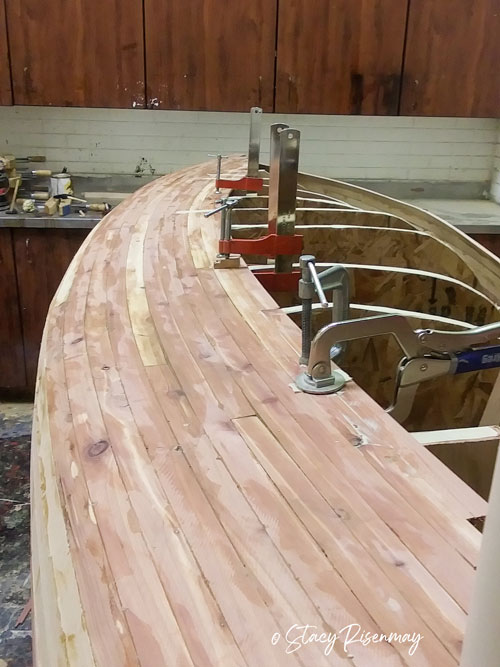 Once he had all of the wood strips glued and sanded, he added bumpers. Then it was time to seal it! You lay fiberglass cloth other the canoe and then add boat epoxy. This not only seals it, but adds a ton of strength. He did this in the inside as well. 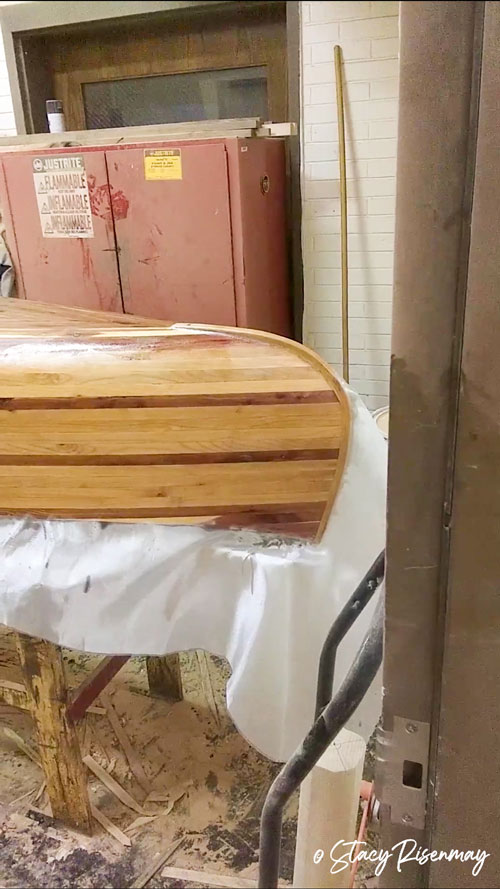 After he added the rims (which give the sides added support), he added a second coat of epoxy.

He didn't video or take pictures of the process of making the seats, doing the walnut inlay, or the paddles. It was crunch time and he was down to the wire to finish it before the woodworking showcase.  But here is the finished canoe! 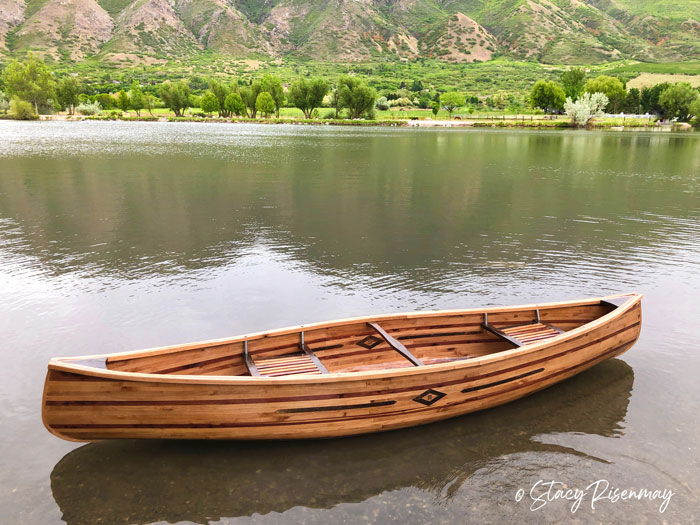 He is thrilled that it is finally done and that it works so well on the water :) 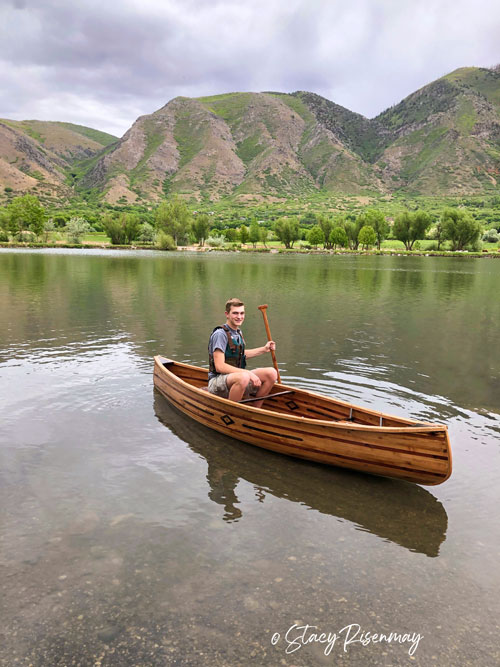 We took it to a local pond to test it out. It was a quick turn about the water since it was cloudy and a bit windy. I can't wait for an actual "all afternoon" trip out on the water!

Out of 164 projects, there were 5 that received double blue ribbons. His canoe was one of those. He also go the Principal & Administration's Choice award. Even if he hadn't scored at the top, I would still be so proud that he set his mind to do something difficult and that he had stuck with it. Next time he takes it out, I get to tag along :)

There is a video of the process on my Instagram Stories if you are interested. I'll save it to my "Family" highlight reel. It is also uploaded to my TikTok account. 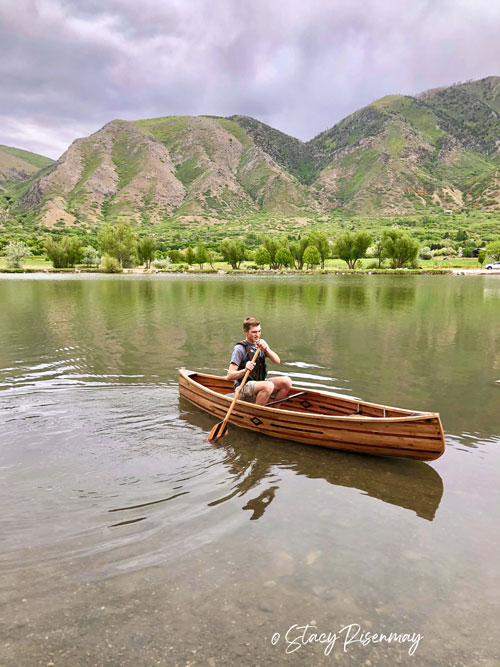