I revealed the backyard landscaping project last week and you were all so kind! I am excited to be sharing the tutorial for the DIY concrete fountain. It was one of those projects where it could have been an epic fail. I had never done a large scale concrete project before. I think Shane and I were both pleasantly surprised when it came out just like I had planned. 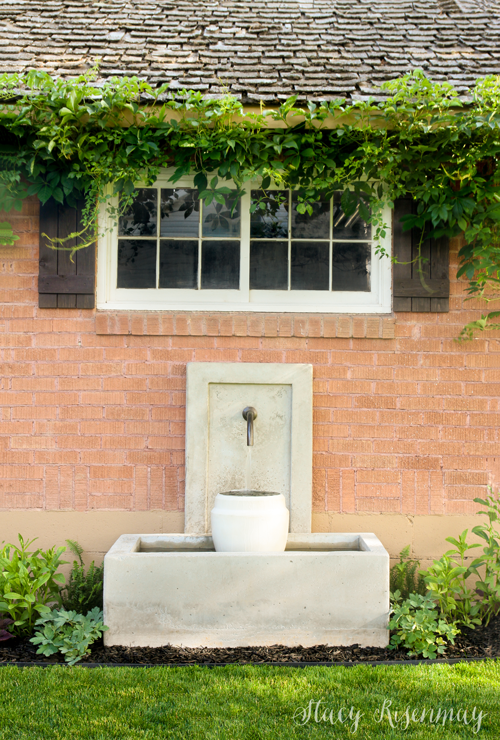 When Shane and I were making the fountain, because we used quick set concrete, we had to work fast. We set up my phone on the tripod to film but didn't have time to stop and also take photos. So all of the photos of the concrete process are all screen grabs from the video. It really is easier to understand the process by watching the video, but I also know that some people prefer not to watch videos so I added the photos as well.

I watched a lot of videos and read a lot of articles and decided that the best material to use for the forms was melamine. It is relatively cheap and the concrete won't stick to the slick surface. I built the form for the fountain back and two boxes for the trough base out of this material. I ordered it online from Home Depot and had it shipped to my home. You could also get it by curbside pick up. I order a combination of 4x8 sheets and  smaller pieces meant for shelving.

The DIY Concrete Fountain Back

I built it to be 2 feet wide by 4 feet tall. I wanted a border so I added a melamine board in the center. I wanted everything to be smooth so the rough, unfinished edges of the center melamine board got a layer of caulk. I also puttied where the screws were so you wouldn't see an impression of a screw head in the finished fountain. 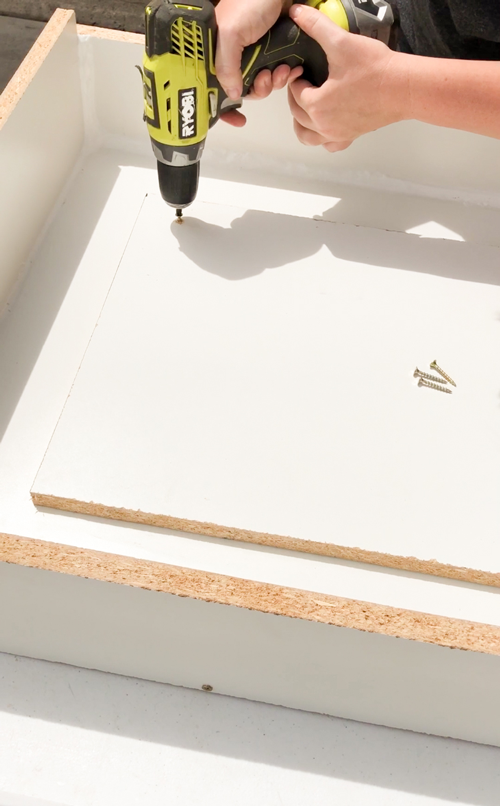 I wanted the corners to be rounded so I added caulk around the whole thing and added extra to the corners. 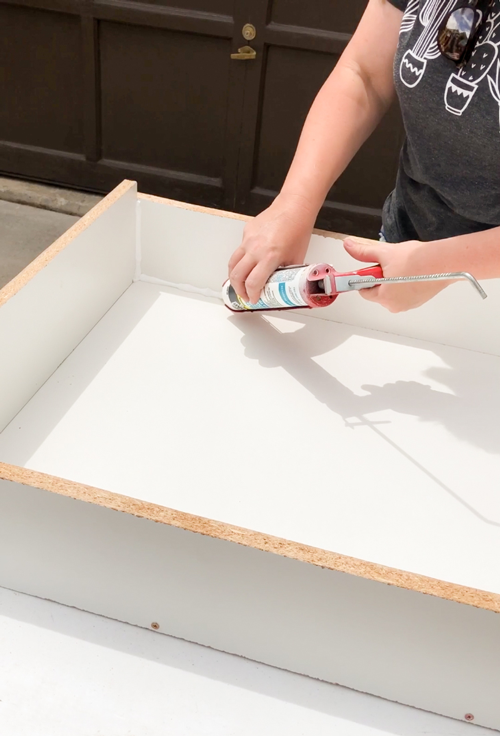 I measured and marked where the holes needed to be for the pump tubing. I cut small pieces of PVC pipe that I knew would be large enough for the electrical plug and tubing to fit through. When Shane started adding cement mix to the form, I held them in place until the concrete was smoothed and held it on its own. 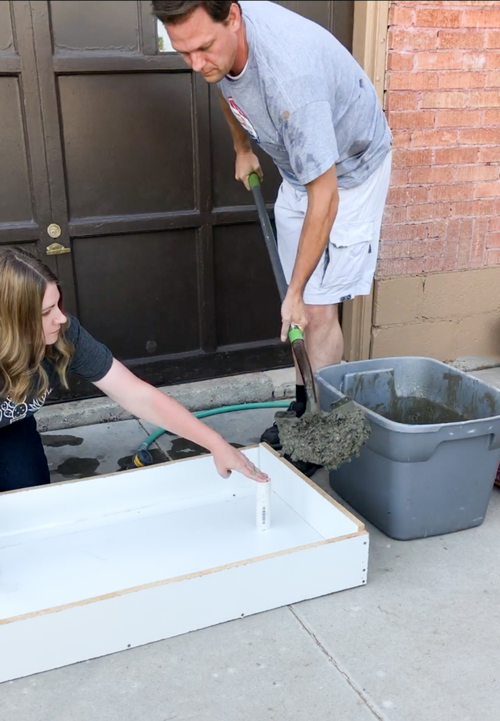 As we were adding the cement mix, I spread it evenly and hit the sides of the form with a rubber mallet to ensure that there weren't any bubbles. 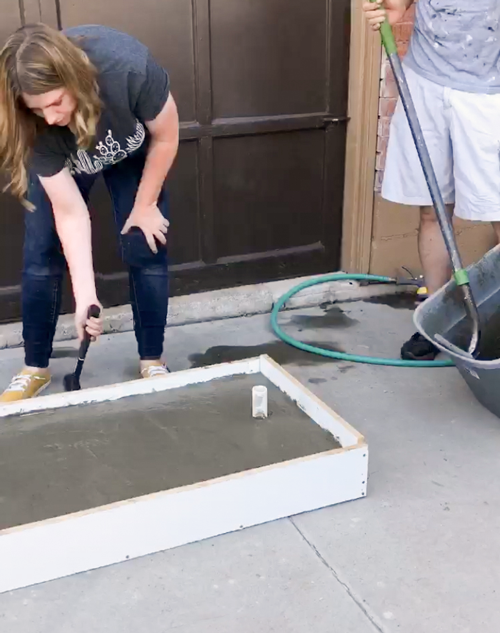 Once it was all filled and was 4-5" thick, I pressed a PVC pipe into the back in between the two pipes. Then I removed the long pipe. This created a channel on the back for the pump tubing to press into. Since the fountain was going to be pressed up against the garage wall, I didn't want to risk the tubing getting squished.

Once it had dried overnight, I unscrewed the form and tapped the form off of the cement. 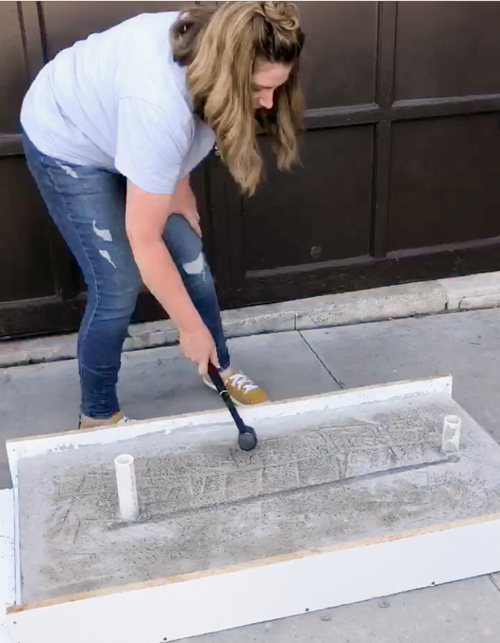 Getting the center board off required a crowbar and some tugging. 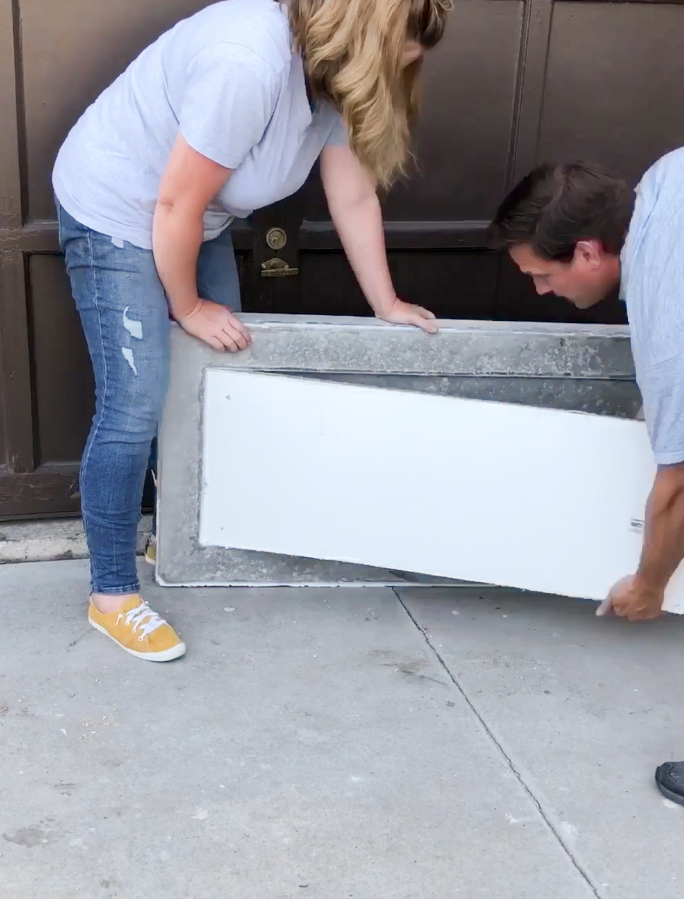 I used a saw to cut the excess pipe off the fountain back so they were flush with the concrete. 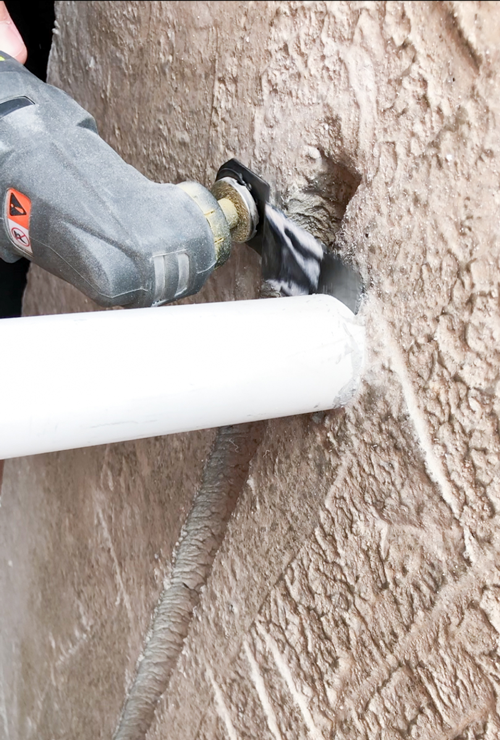 You can see how the caulk made the edges softer and rounded. The kids helped me pick it off. Any residue got sanded off with a 220 grit sandpaper. 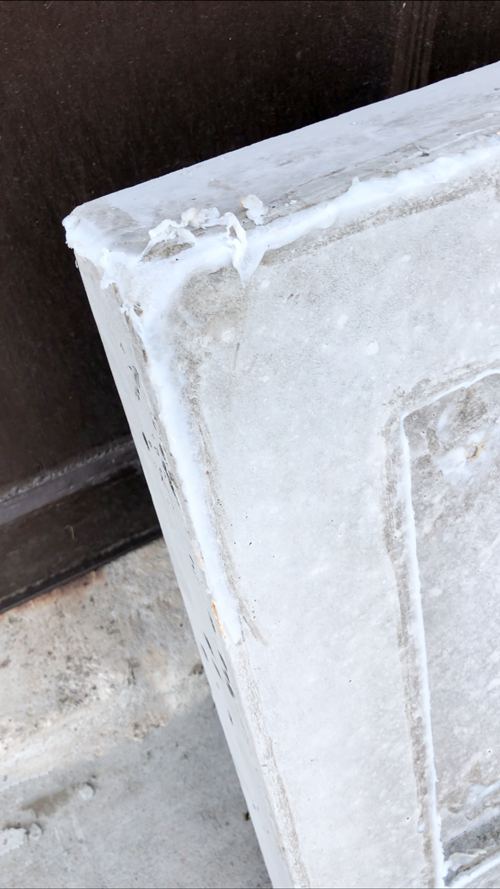 I wanted my fountain to be roughly the same width as the window so it ended up being 4 feet long and 2 feet wide. I built the outside box to those measurements and then since I wanted the sides and bottom to be 4" thick, I built the inside box accordingly (40x16). I screwed the large box together really well since it would have a lot of concrete poured in it and I wanted it to hold up to the weight.

I did the same caulk trick to ensure the edges and corners were rounded.

The inside box didn't need to be as structurally sound. I also needed to attach it from the inside so I could disassemble it when the concrete dried. I used L brackets. 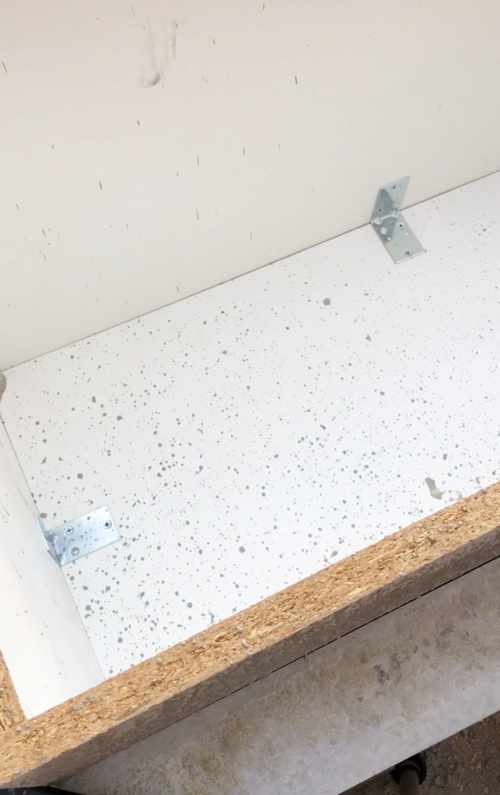 Once we had about 4" of cement mix in the largest form and I had hit the side to level it well, we put the smaller form inside and began adding more cement mix in to form the sides. I constantly hit the sides with the mallet to release the air bubbles and help level the cement.

When the cement was dry, I unscrewed the forms and tapped the pieces off. The bottom piece of the smaller (box) form had to be chipped out. It did not come out easily! If you have any ideas on how to get that piece out more easily, I'd love to know! Tell me in the comments :) 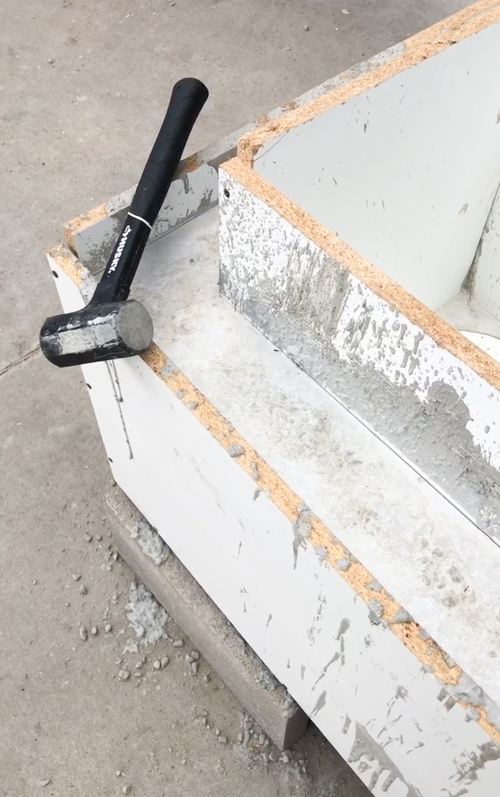 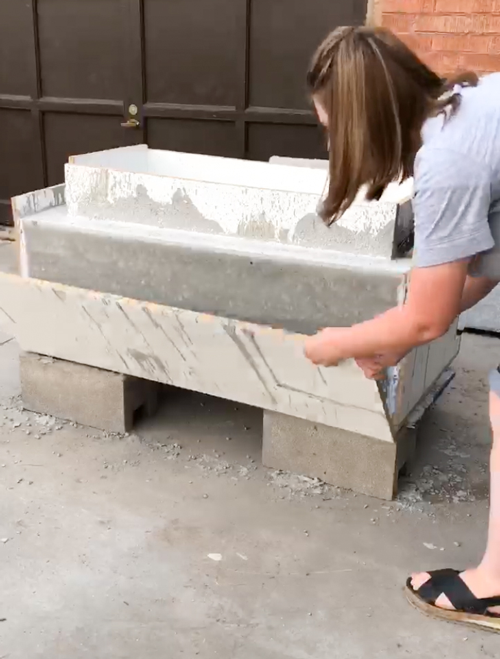 I started looking around for a fountain spout and all of them were well over $100. Of course my DIY brain kicked in and decided to try and figure out a way to just make one. I ended up using 90 degree angled conduit with a shower flange. A little spray paint and there you have it! I used Liquid Nails Fuse It since it was recommended for metal and concrete. 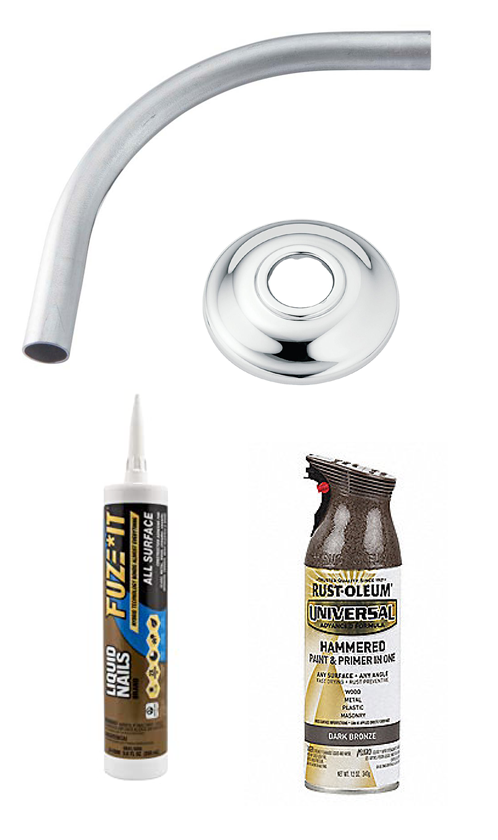 The back used five 50 pound bags of concrete mix and the trough used sixteen bags. This fountain is HEAVY! 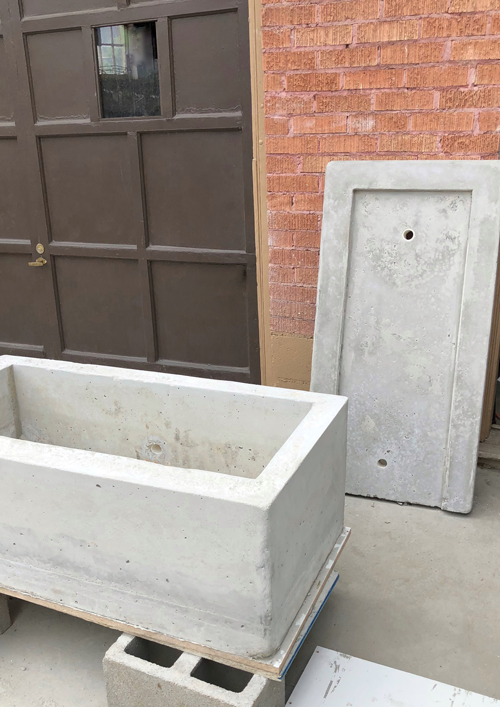 If it was good enough for the pyramids, it is good enough for my garden fountain. We did the 'ole rolling it into place trick using PVC pipes. It actually went really fast! And by "we", in this case I mean my handsome hubby and sons. By this point I had sprained my ankle and wasn't much help other than filming.

I love the look of the fountain and I like hearing it as I relax on the patio or as I'm weeding the garden. The kids are trying to convince me to take out the pot and add some small fish. We'll see.... I do think it might be fun to add a few small water plants. But then again, I am always in the mood to add more plants! 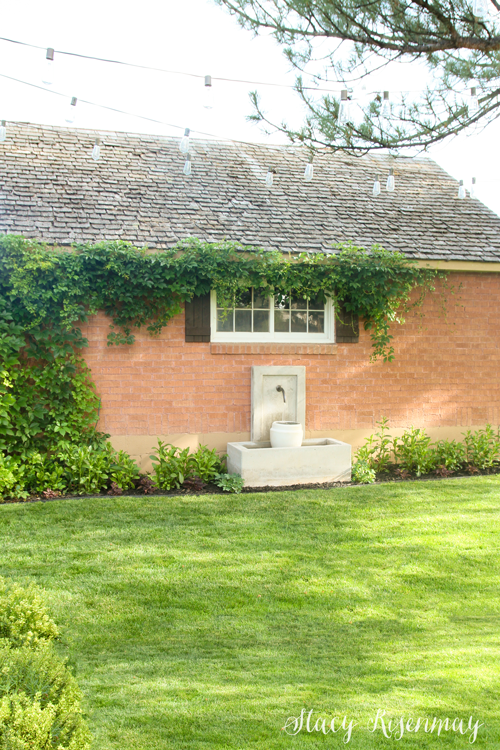 If you missed the whole reveal, make sure to check that post out!

What outdoor project are you hoping to tackle this summer? 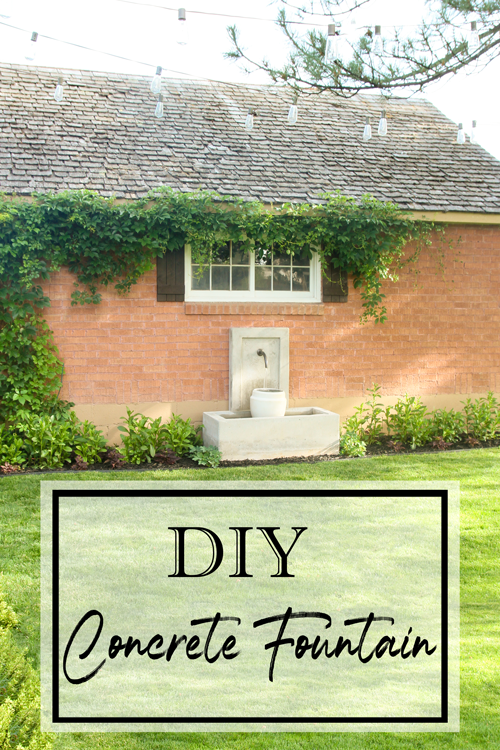