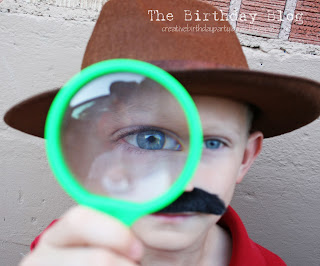 My oldest turned 9 this month! Since he is too big for the cutesy stuff like pin the tail on the donkey, and musical chairs, we decided to do a detective party. I figured the kids would be old enough to read and figure out the clues. I think this is my favorite party I have ever done! ( although I have a tendency to say that every time) Here is what I did for the invites. 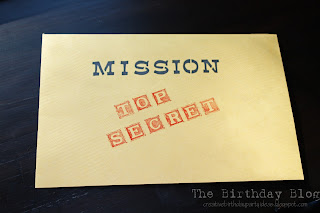 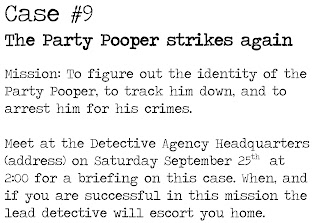 I used stencils and rubber stamps on the Manila folder. Inside was the paper with the details of Case #9 (since he was turning 9). I downloaded the typewriter font from dafonts.com for free. They have a lot of fun fonts!

I made brief cases for every kid out of cereal boxes. I glued the boxes shut with my glue gun and then spray painted them (Krylon Satin Finish in # 2903Earth Tierra). I had also cut 1 ½' strips out of another cereal box to be the handles. I then used an X-acto knife to cut the three sides so it would open. I used Velcro to be able to close them. To attach the handles I used a glue gun and brad fasteners. Not only do the brads give the handles extra support to stay on, they give that extra detail that helps it look like the real thing! 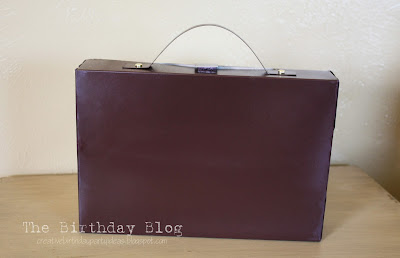 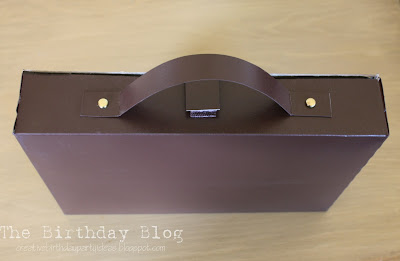 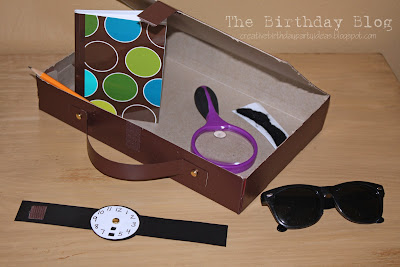 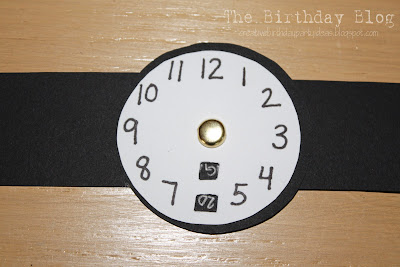 I made the decoder watches. I cut out a black circle and a white circle that was slightly smaller. I used an X-acto knife to cut the small squares out of the white circles. I fastened them together with the brad and then wrote the numbers and letters as I rotated it. I then glue gunned it onto a band. They had Velcro on them so the kids could take them on and off.
When they arrived they were greeted by Agent last name here. 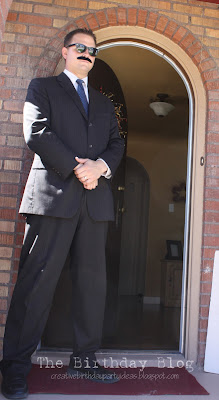 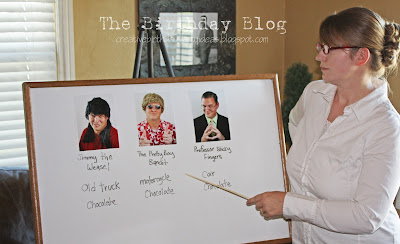 I was the Director of the detective agency. I briefed them on the case. I introduced them to our suspects.

Jimmy "The Weasel" & Professor Sticky Fingers & The Pretty Boy Bandit
I am sure you  have figured out that these are all the same person. I took these shots of my husband a few days before the party and had them developed as 5x7s for the suspect board. 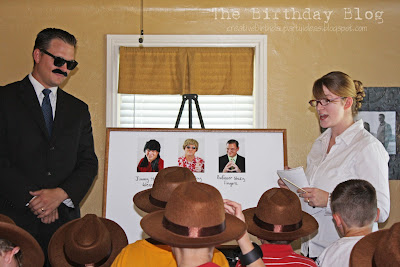 One of these suspects was responsible for stealing the treats from parties all over the city. I told a little bit about each one and the kids took notes in their notebooks. The facts they learned would help them narrow down who it was later.
I also told them that the thief thinks he is smarter than us detectives and so he leaves notes for us at the crime scene to tease us. I had the clue that was left at the last party he stole from. I had written the clue in "invisible ink" (aka lemon juice) so the paper looked blank. I had been told to hold it over the light to reveal the message, but when I tested it the day before it took forever. I have about as much patience as a nine year old boy and that was too long. We used and iron instead. The message appeared instantly. It was a big hit.
The message was our address.
"Oh No!" I said. "That means he found out about our party! We better go check on our cupcakes." 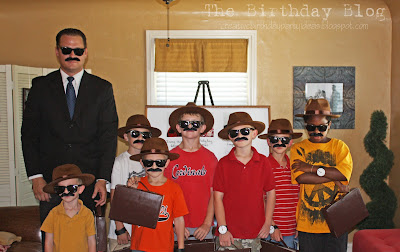 Aren't they cutest detectives ever??? P.S. I forgot to mention that I also got them all detective hats from Oriental Trading. They were surprisingly cheap and you could pick the amount you buy instead of them coming in a pack of 1 dozen. 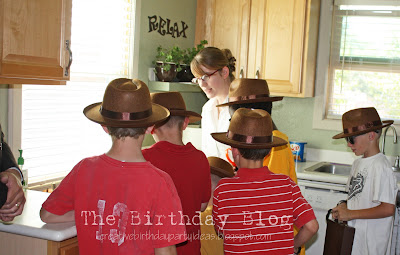 In the kitchen we realized that the cupcakes were missing. There was a note instead. It was written in teeny tiny writing. Good thing they had magnifying glasses!
The clue said he had gone out by way of the basement door. It also said he loved chocolate cupcakes which was a clue from the info given earlier about the suspects.

On our way down we got a message from Agent last name here via walkie talkie that an eye witness had come forward and said that the thief had dark hair. They figured out that eliminated The Pretty Boy Bandit as a suspect.
The note that we found was just outside the basement door crumpled up. It was written backwards. We  went into the down bathroom and held it up to the mirror. It said that he had parked his getaway car at the nearest parking lot.
While we were walking across the street to the parking lot we got another message on the walkie talkie. The eyewitness said the thief drove an old truck. My husband had parked our old truck in the parking lot of the school earlier that day and left the clue under the windshield wiper. This clue also helped them narrow down who it was because of info given at the briefing. They had figured out that is was Jimmy "The Weasel". They thought for sure he was hiding in the truck eating our cupcakes. 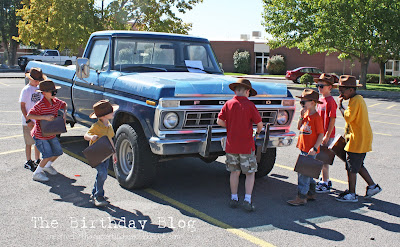 The kids used their watches to crack it. 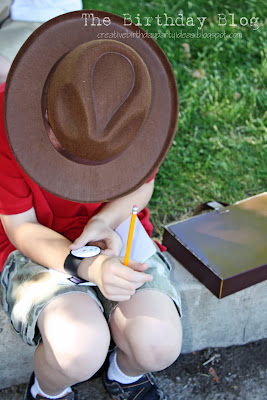 It said "Gotcha! I need some milk to go with these cupcakes." It took a while for them to crack the code. This gave my husband enough time to get changed into his Jimmy costume and get things set up back home. 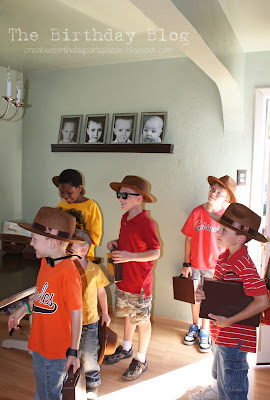 And this is what they found! Jimmy eating our Oreo cupcakes. 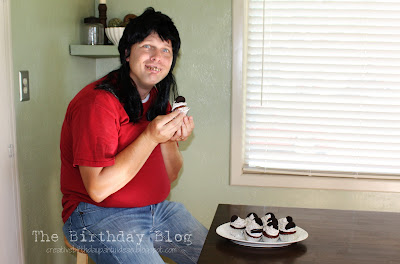 I don't think I have ever laughed so hard as I did at those kids' reaction. It was so fun! They got to throw him in jail too. I used PVC pipe and cardboard spray painted grey. I made it to fit inside the door frame of our office. 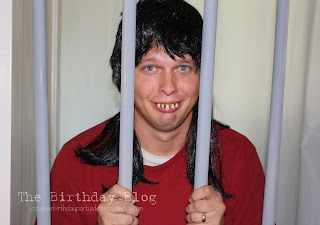 After eating and presents, I gave them our thank you goodie bag. It had smarties, dum dum suckers, and extra mustaches. 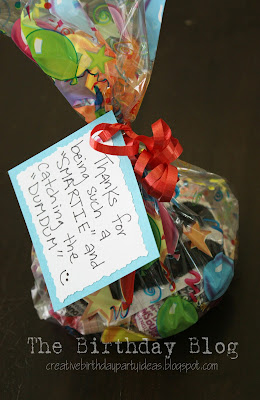 It was so much fun! The boys stayed in character the whole time. They looked at everything as if it were a clue. I looked out the window and saw two of the neighbor boys playing detective later that day. I love sending home hats and things like that because it is like they are taking the party home with them.
I want to also mention that tons of things went wrong. I was sleep deprived ( as in 2 ½ hours total of sleep)due to a teething baby, I had a primary program rehearsal that day, and  a few other little things. I had to nix the ID cards I was going to make for each kid. I had no makeup on. I didn't have time to iron my shirt and I couldn't find my short black skirt. And I had to hide my dirty dishes and stacks of bills in the office because I didn't have time to get to them. But you know what? The kids didn't care. They had a blast and this is what it is about. It's not about us as parents. It isn't about things being perfect. It is about having fun! Oh, and being cheap. This whole party cost me under $60.00.

« Organizing My Laundry Room
So this just happened.... »