This is a sponsored post for The Home Depot Foundation who I love dearly. Every thought, opinion, and experience is all mine.

My very first experience with The Home Depot Foundation was back in November of 2011. I was able to go to Atlanta and do a service project for veterans in need. It was an incredible experience and one that I have been fortunate to experience over again several times. I loved serving at Stiggy's Dogs in Detroit where they train service dog for vets. And I loved learning about what the Fisher House foundation does for vets and their families when I was in Miami.

The kick off for this Celebration event was on September 9th in 10 cities around the US. In just two months, from 9/11 to Veterans Day, the Team Depot volunteers will put their talents to work to transform 1,000 homes for veterans. Isn't that crazy!

There are a few things that stand out to me every time I go to an event. Number one, the employees (who are sacrificing their days off) are excited to be there. They are not required to participate. They are there because they actually want to serve. They have a happy energy! Across the country Home Depot employees improved the housing for 500 veterans in just one day! Number two is that I always hear people talking about how they wish they could do more. They wish they could do these projects for ALL the veterans in need in this country. And number three, is that the person (or people) being served is overwhelmed and so appreciative of all that is being done. And this time, the recipient was named Jerry. 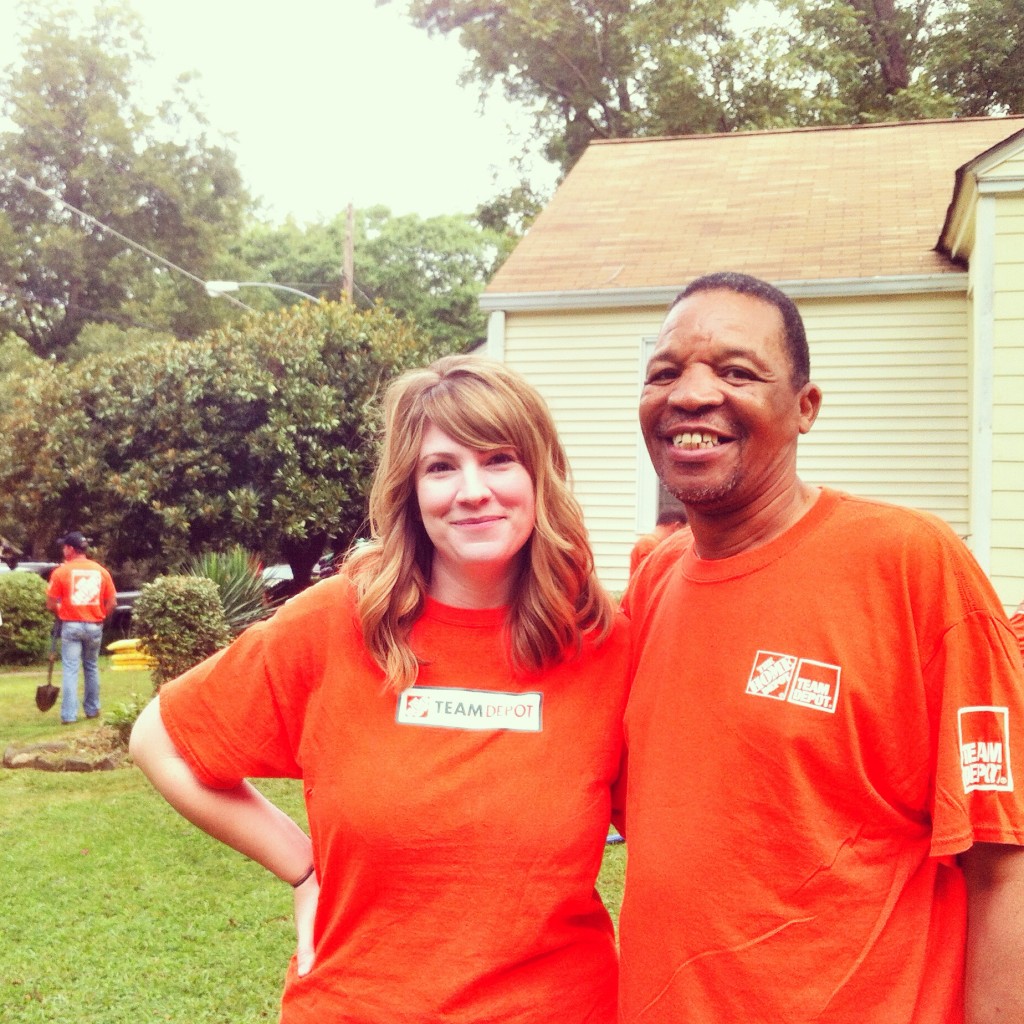 Jerry served in the Army during Vietnam and later worked for the Department of Defense for 15 years. He moved in with his grandma after his grandpa died to take care of her. After she died his mother became ill. She currently is in the late stages of alzheimer's. She lives with Jerry and he takes care of her. Jerry serves not only his family but the members of his church. Everyone who knows him knows how giving he is. He was nominated by the non-profit organization called House Proud in Atlanta. He was just about the cutest guy I have ever met :)

There were about 30 employees from the Midtown store that were there to help. We even had a couple of executives from the headquarters there to help out.  They were amazing! 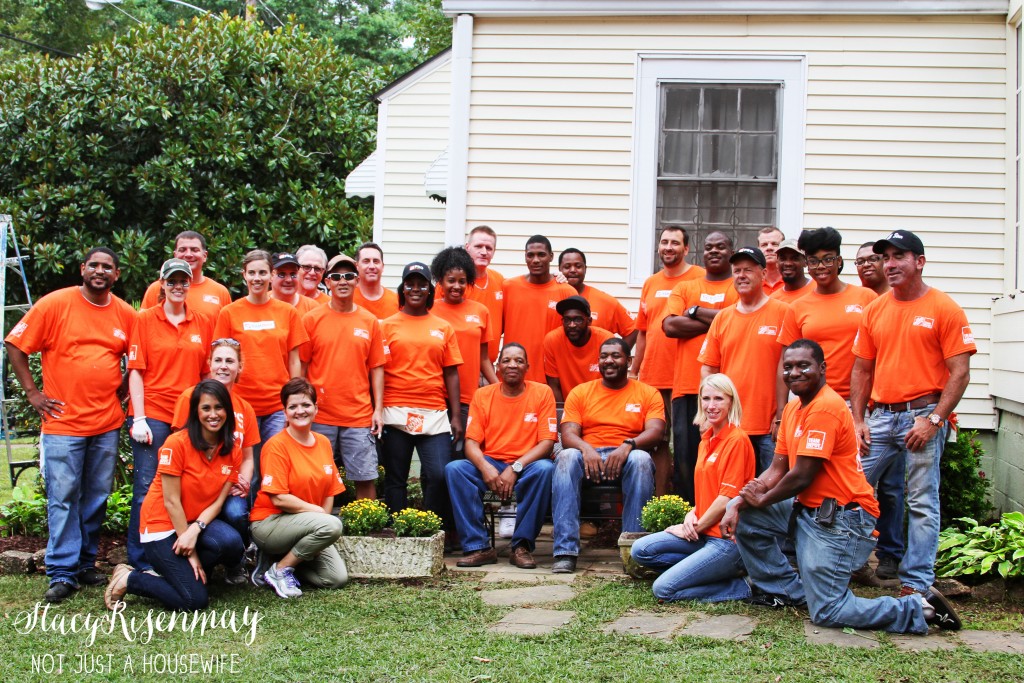 Jerry told me that when his grandpa was alive and lived in this house that he kept the yard immaculate and had a reputation for having the prettiest yard. He feels bad that it has gone unattended. But I know caring for loved ones is much more important. His priorities are in the right place and so I was the most excited for the landscaping part of the makeover.

This is the front of the house before we got started. 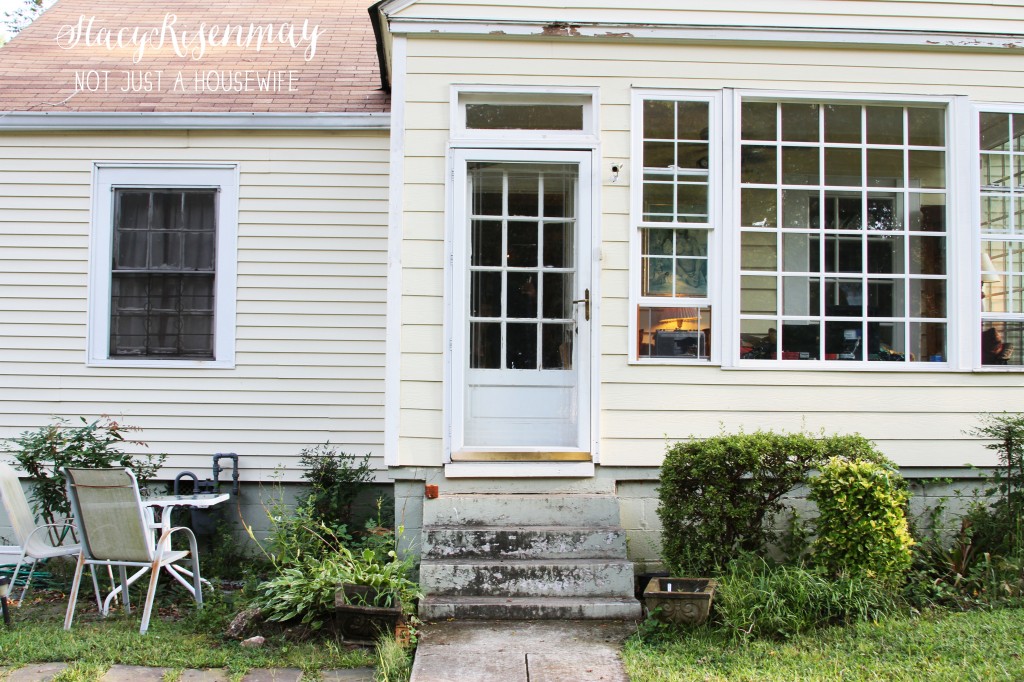 This is the side yard before. I didn't get a good backyard shot before they got to work. By the time I made it around there the guys had already cleared out the vines and brush that needed to go. They were making room for a patio and pergola. 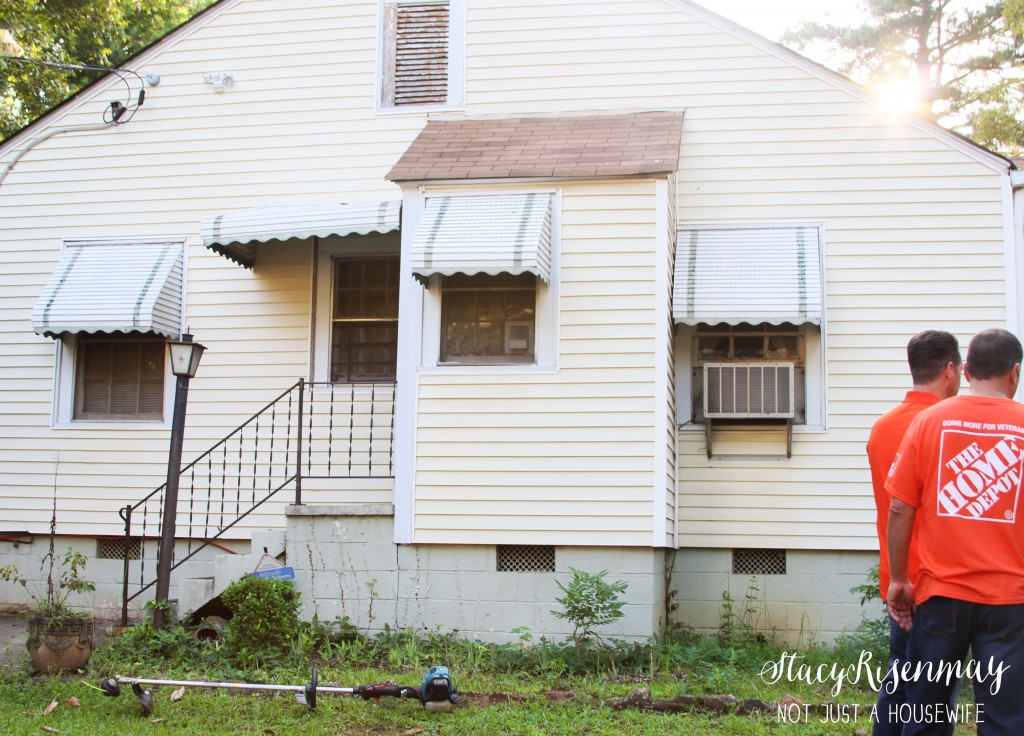 The carport had an old fence and had a ton of stuff that needed to get hauled off. It needed a paint job too. 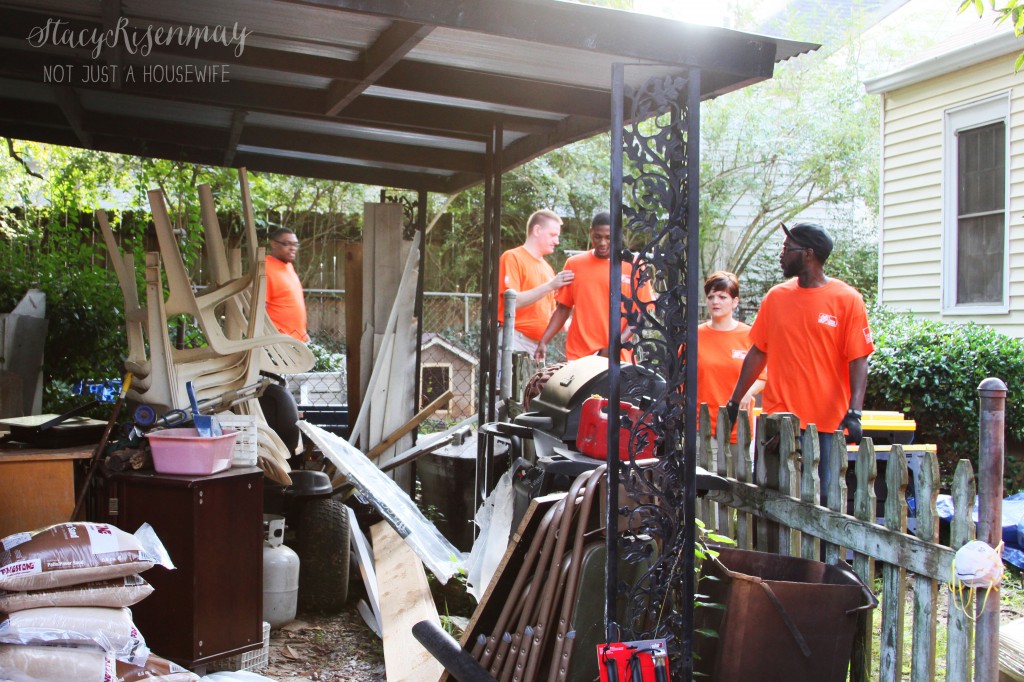 The shed that is attached to the carport had some rotted boards that got replaced. The entire thing got scraped, primed, and painted. 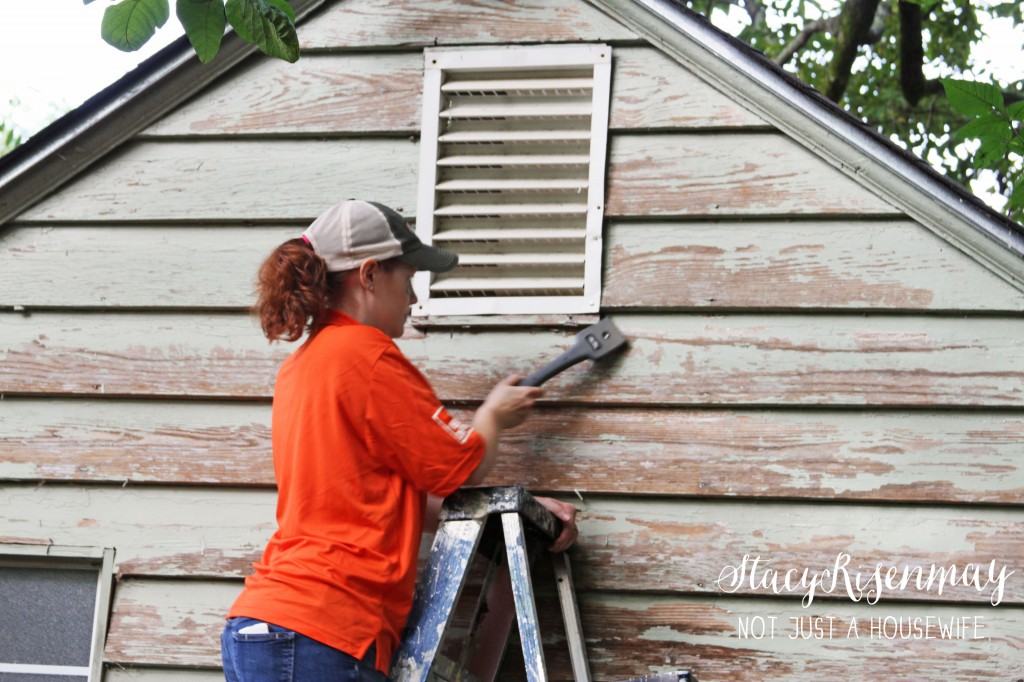 The base of this gorgeous tree got a makeover too. 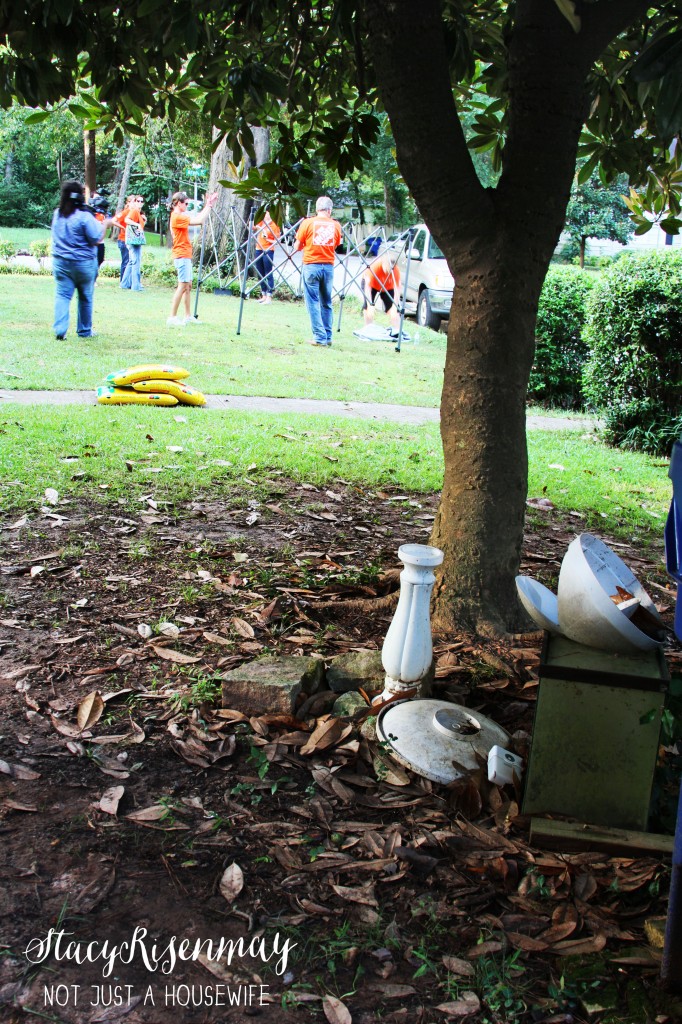 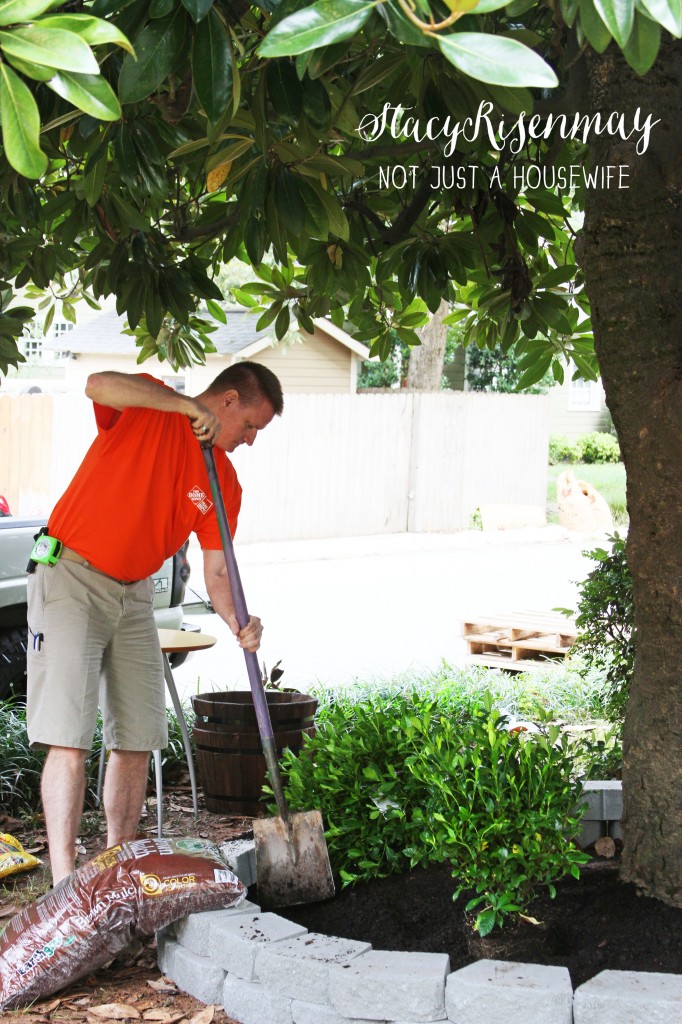 Everyone worked so hard! I worked half the time and took pictures and video half the time. I was not use to the humidity and I swear I was the sweatiest one there! I left straight from the job site to go to the airport. I felt bad for the poor people who had to sit by me on the way home! 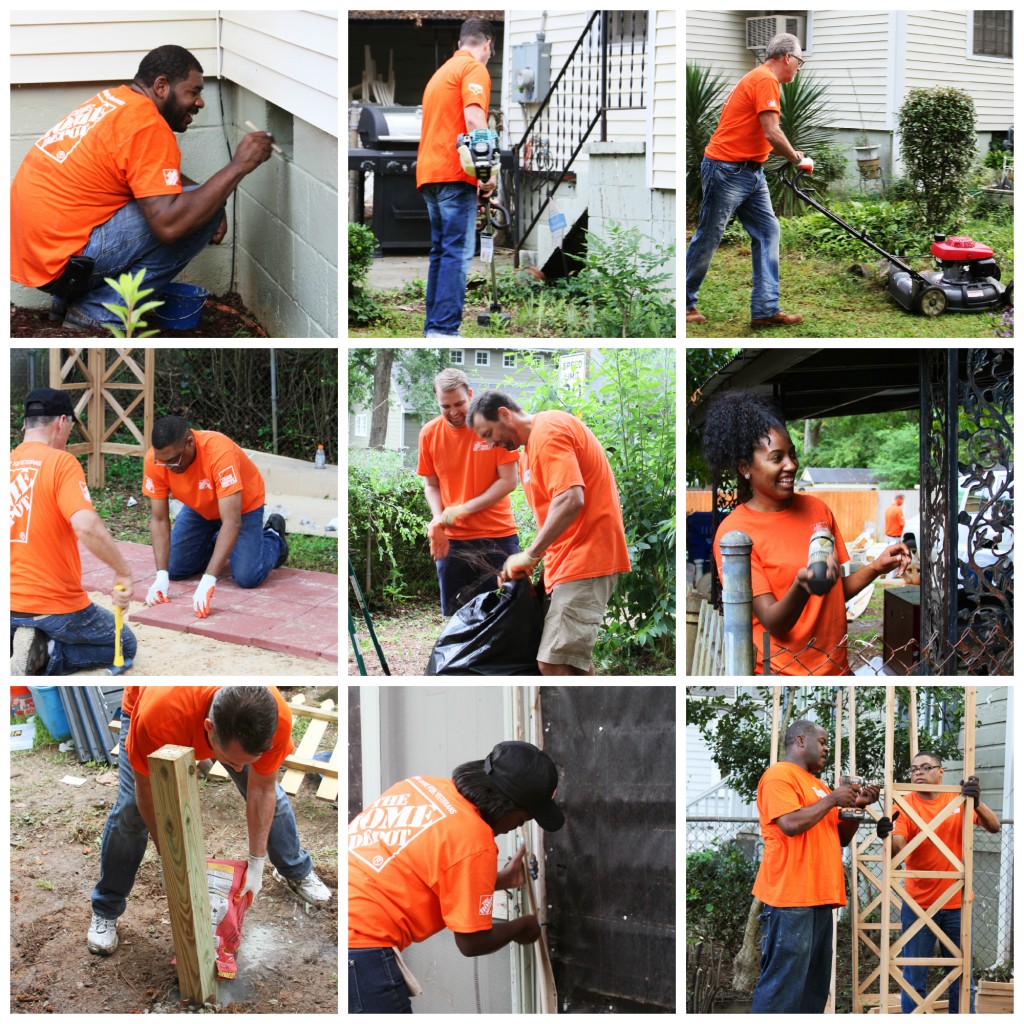 Jerry didn't have a flag so HD gave him one and he was so excited to hang it on the front of his house. 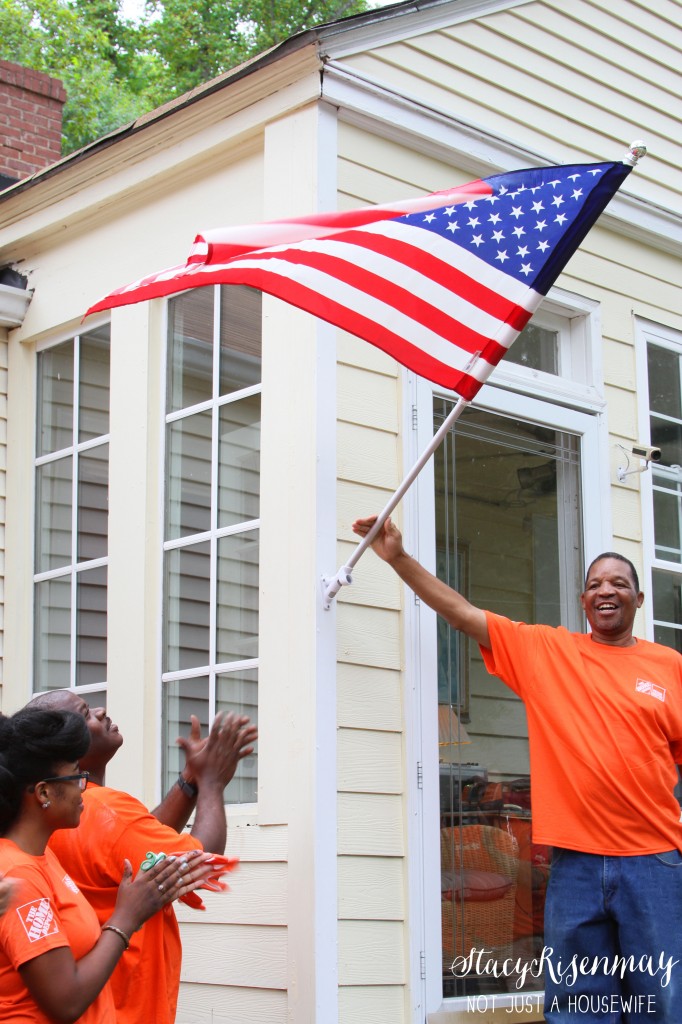 Some of the local news crews came and interviewed Jerry and told what was happening. One of the thing we were going to do was build a ramp so Jerry's mom could be easily wheeled out of the house. A viewer saw the news report and called the news station. He is a steel fabricator and offered to create a custom metal ramp for Jerry. He came right over and took measurements!. Man I just love when people are moved by something and then take action. 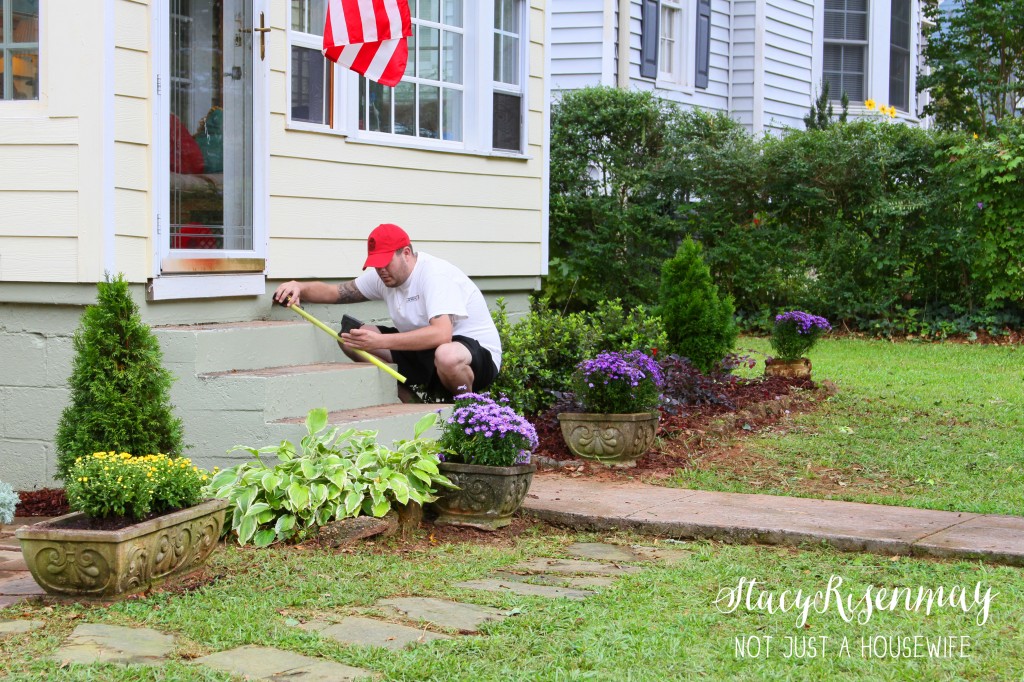 And here is the (almost) finished house! 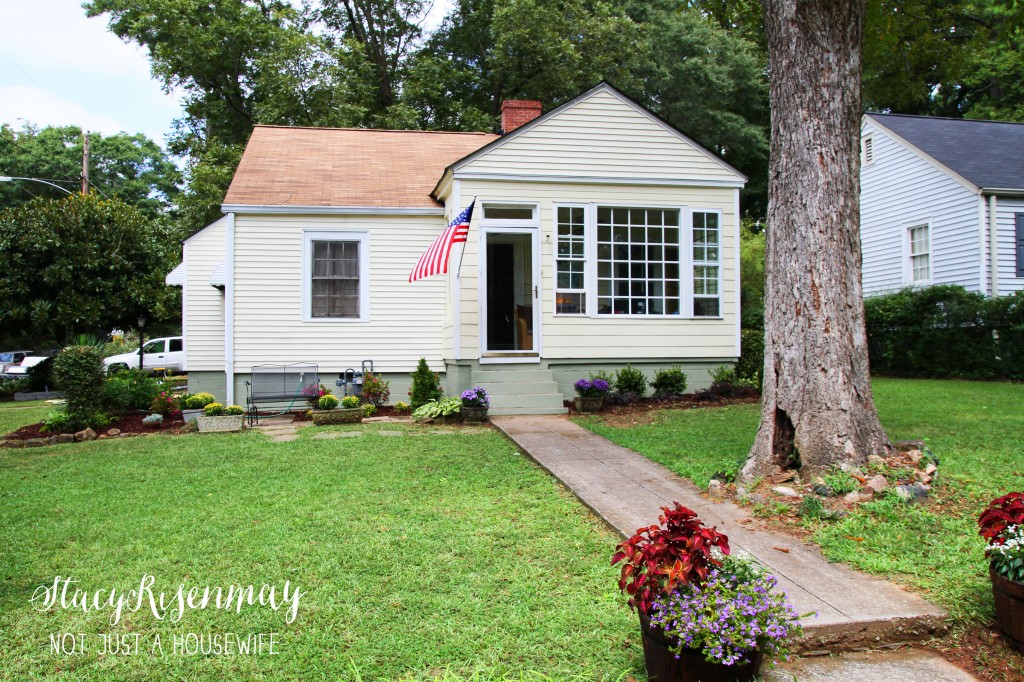 They went back the next day to do touch ups and to finish the patio. They had finished laying the pavers but needed to set the pergola in place and add a flower bed around the patio. I wish I could have seen it all finished! The new outdoor lights still needed to be hung as well.

I didn't take pictures of the inside because Jerry's mom was inside sleeping, but they painted the inside of the house as well. 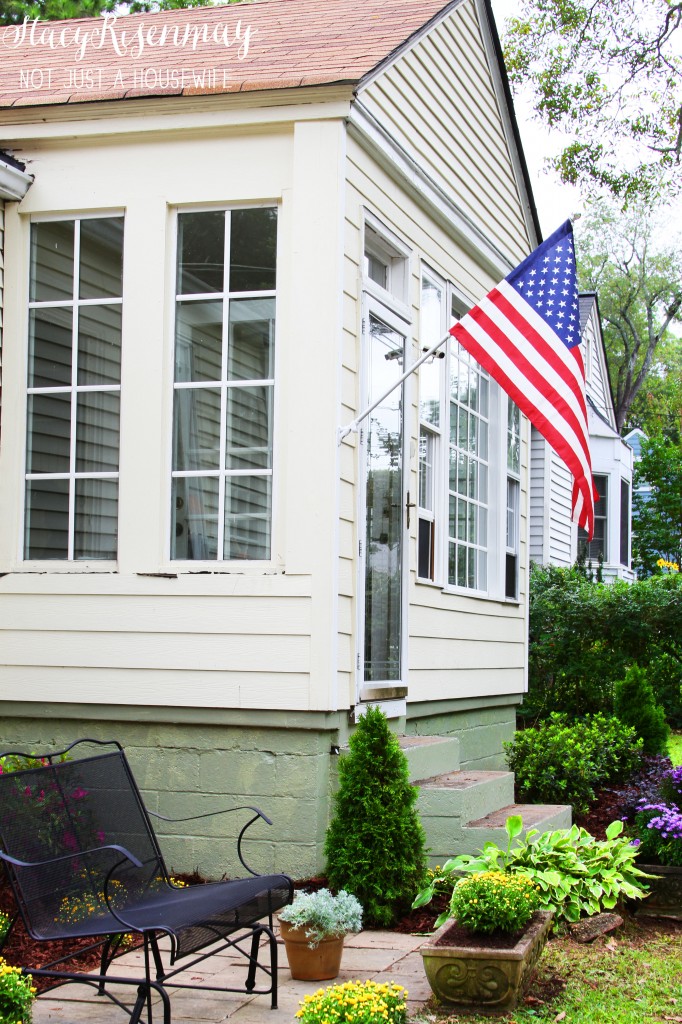 It is probably not up to Jerry's grandpa's standards but I bet it will be even prettier when the plants mature a little more. 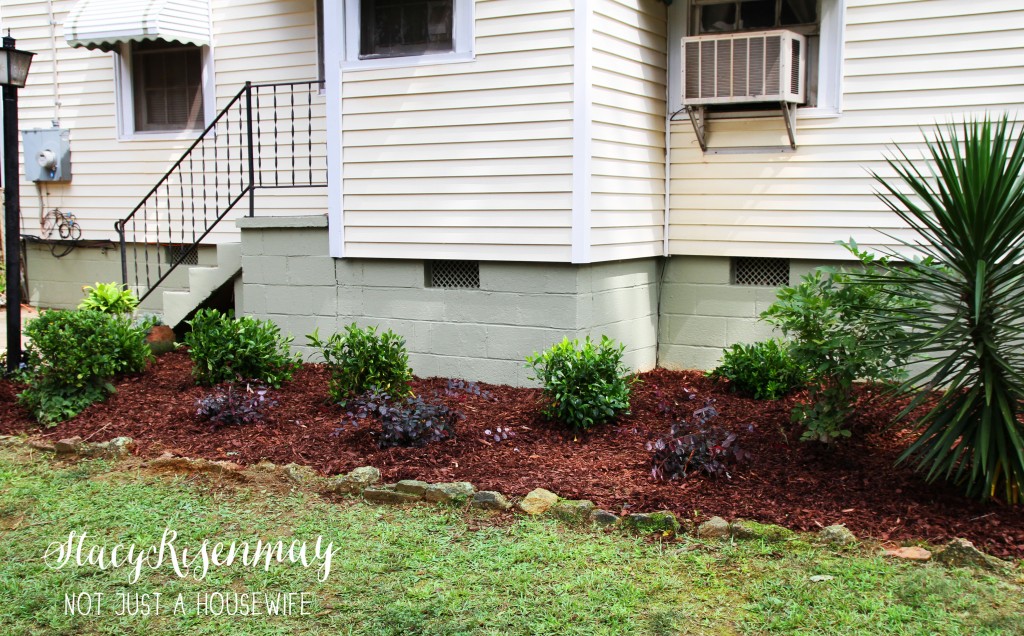 I planted some pots for the walkway. 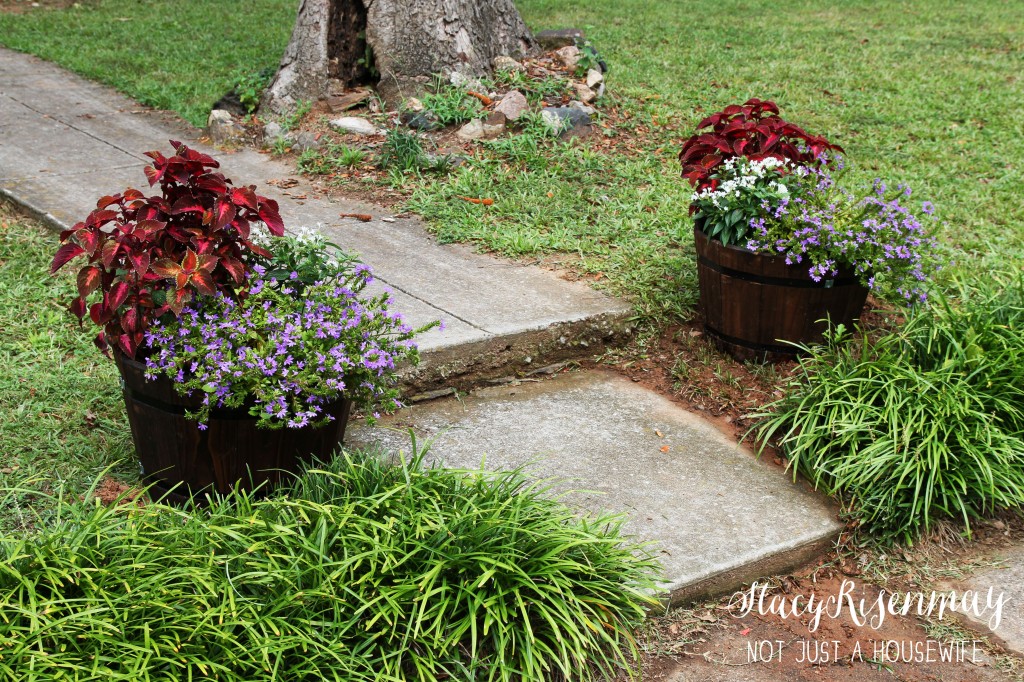 The mail box got spruced up. 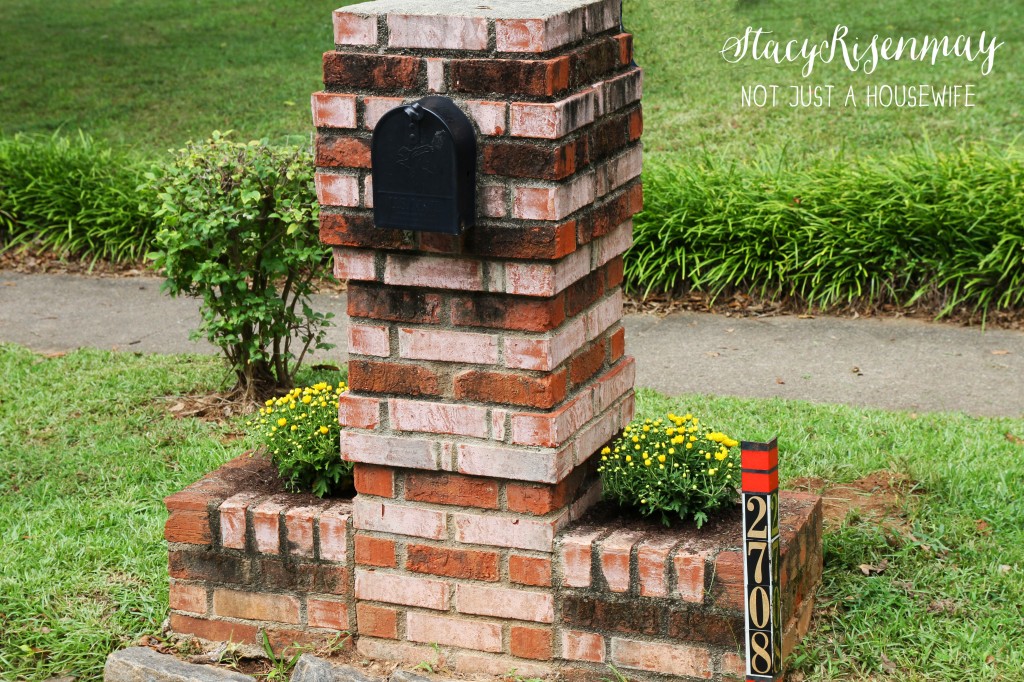 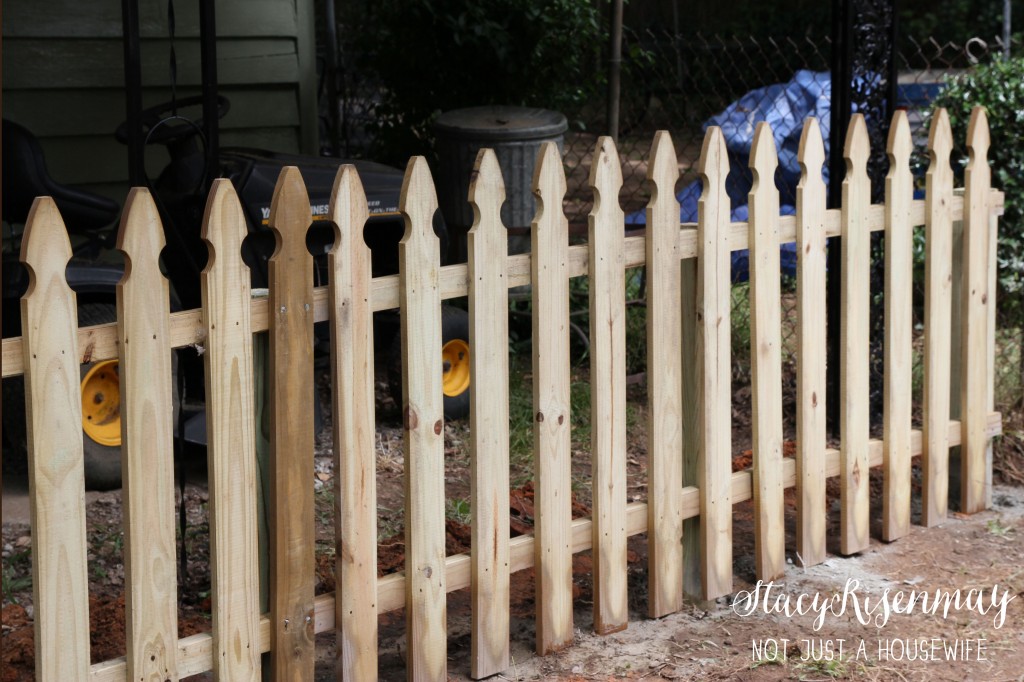 I have said this before and I will say it again, I think one of the main reason we are on this earth is so we can serve others. I think the main reason the good Lord gave us talents is so we can use them to serve others. I love and adore when companies "get it". I love when they give back for the sole purpose of doing the right thing. Home Depot has spent over 80 million dollars to provide safe housing for our veterans in the last 3 years alone. They do it all year long. I can't even imagine how may associates and how many man hours that would add up to! I love following the Home Depot Foundation on Facebook because when their photos pop up in my feed it reminds me to look for ways to serve. And it reminds me to be grateful for those who have served and do currently serve out country. They also have a website that is constantly being updated with all the projects going on throughout the country.

I know this post was kind of long but I would love if you could stick around a couple minutes more to watch this little video I put together of the event. You will get to know Jerry a little bit and feel what it was like to be there :)

« Getting Your Home Guest Ready
NYC or Bust »