On Pinterest I have been pinning fudge recipes. It is just not Christmas without fudge :) I decided to find some recipes that were different from what I usually make. I pinned some Oreo fudge and made it. It was good. I also pinned some Rootbeer float fudge and made that. It was awesome! I pinned one that said it was cake batter fudge but when I read the recipe, it didn't have any cake batter in it. It only had a few ingredients and I just wasn't convinced that it was going to do it for me. So, I made up my own recipe!!!

When I make up recipes I make small batches so if I mess up I won't be wasting as much. So I have the recipe for a small batch that fits in a small casserole dish and you can double it to fit in a large casserole dish. 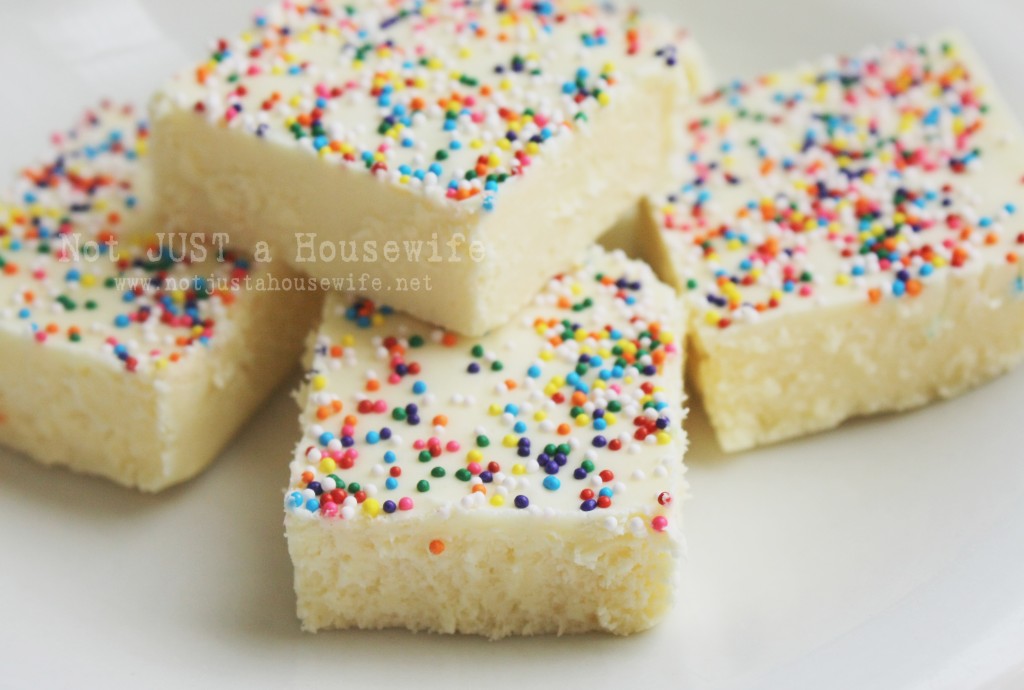 1 can (14 oz) of sweetened condensed milk

In a heavy duty sauce pan add the chocolate chips, cake mix,  and the sweetened condensed milk. Stir while on low heat until the chocolate chips melt. then add whipping cream and marshmallow creme and stir until mixed well.  Pour into a greased pan. Sprinkle on the sprinkles! Let sit until firm. Cut with warm sharp knife to get nice clean lines.

* This recipe, like all fudge recipes that do not have butter and sugar, takes a little longer to set up. I like to make mine the day before I need it. But you can eat it before that if you want.

It is so totally worth the extra time it takes to set up. Your patience will be rewarded with the creamiest fudge ever!

If you find you are having trouble with it setting up then leave out the heavy cream. I think it may be an elevation issue. I have never had an issue and others that live here and those in similar elevations have not had an issue but I had a read who lived at a lower elevation who said it never set up.

« Reclaimed Wood Floating Shelves
DIY Topiary and My Magnet Board »