I have learned over the past few years that life can be messy. I think during my twenties I was so busy being pregnant and having tiny kids that diapers, babies rolling over, kissing boo boos and all that other stuff consumed my thoughts and conversations with friends. Now my kids are a little older, and I am a little older, and I have seen and experienced some tough things. Life is complicated. And sometimes life hands you Plan B.

My sister has recently been handed Plan B. It has been hard to watch. I have felt helpless.

My sister had to move herself and her 5 kids into the basement and rent out the upstairs of her home in order to make ends meet. She was lucky that the downstairs had a small kitchen as part of the "mother-in-law suite" down there. She didn't like that the counters and window sill were baby blue Formica. We would break out into singing George Straight's Baby Blue song every time they were brought up :)

I have been slowly trying to help her get situated down there. It has been hard to whittle down her belongings to fit in less than half the square footage. I wanted to do more that just the normal sister stuff so I told her I could refinish the counters for her. I let her pick out the color. I contacted Rust-Oleum and they generously offered to send a kit for me to use.

Then I found out my sister was taking her kids camping for a couple of days. An idea started forming. Instead of just her counter tops, I decided to do her whole kitchen! 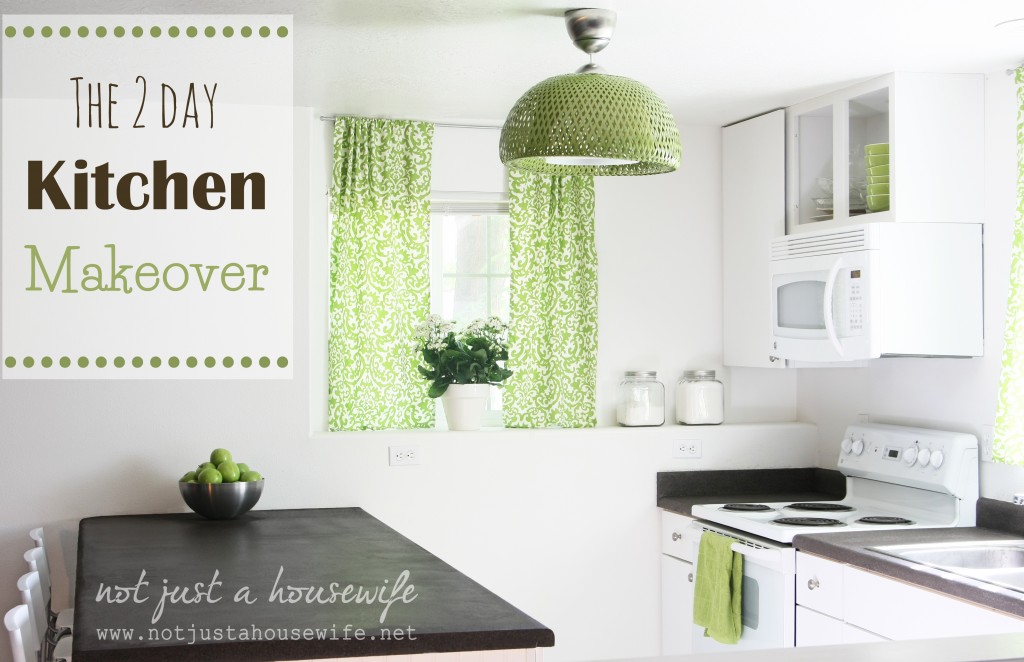 I contacted my local IKEA in Draper and asked if they would be willing to donate some products for the makeover. I asked on Thursday morning and my sister left on Thursday night. That is how spur of the moment it was. I am so thankful that IKEA was on board and willing to help :)

So with basically just me (my husband did put the stools together) and only two days, I redecorated my sister's kitchen!!! 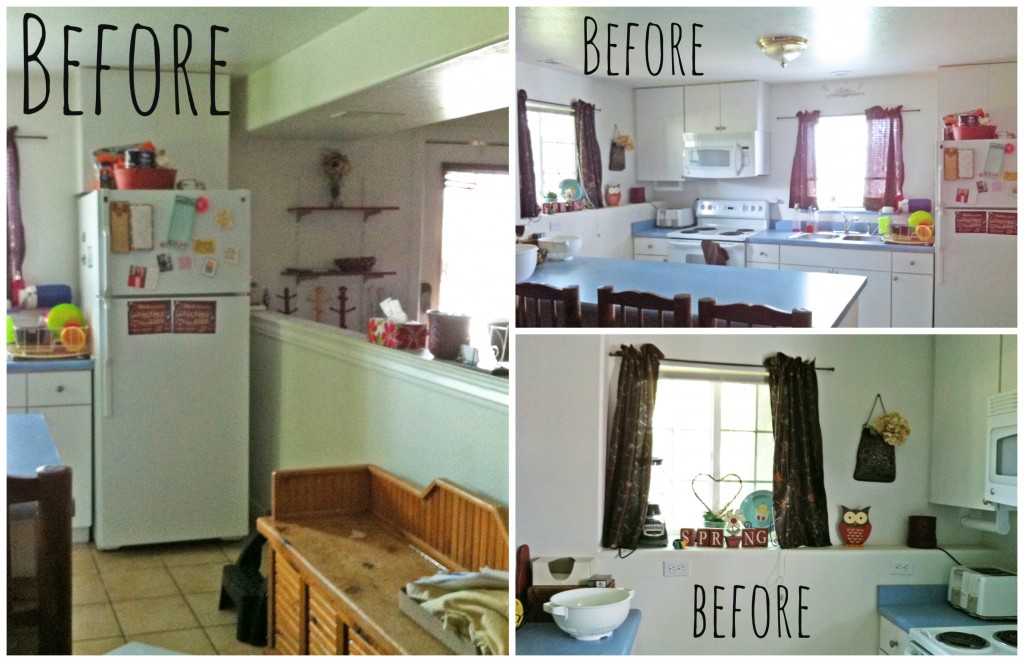 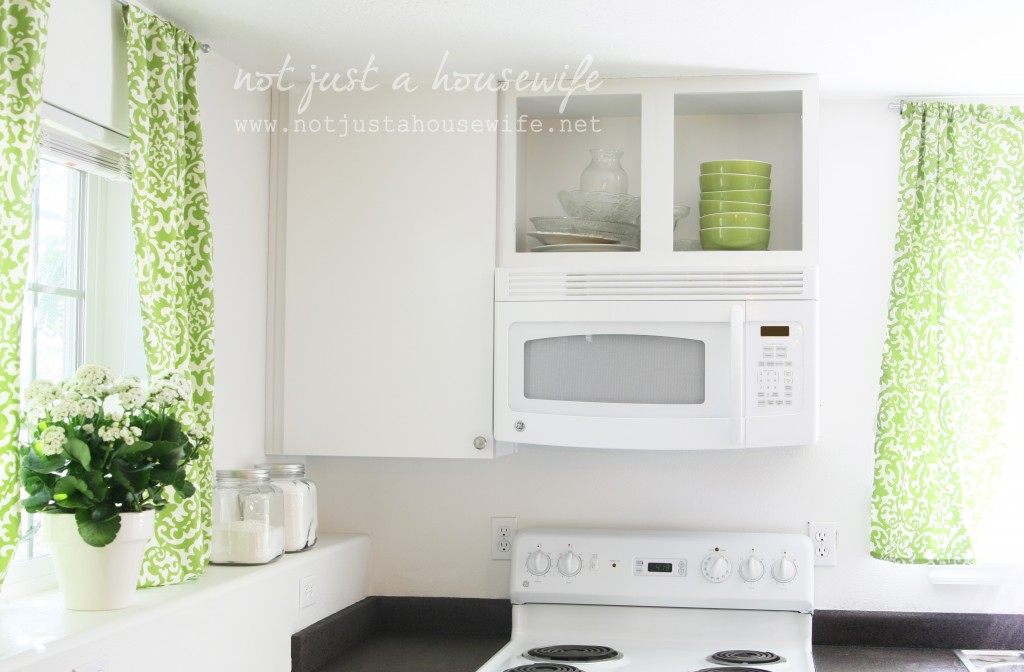 The curtain fabric I bought at Joann's Fabric. It was on sale for 50% off. It was $10 per yard and I needed 3 yards. It was my biggest splurge but it really made the room. I hung the curtains as high as they would go. This helped make the room feel taller. I also sprayed the curtain rods with silver spray paint. The brown rods even though they technically matched the counters, were too dark. 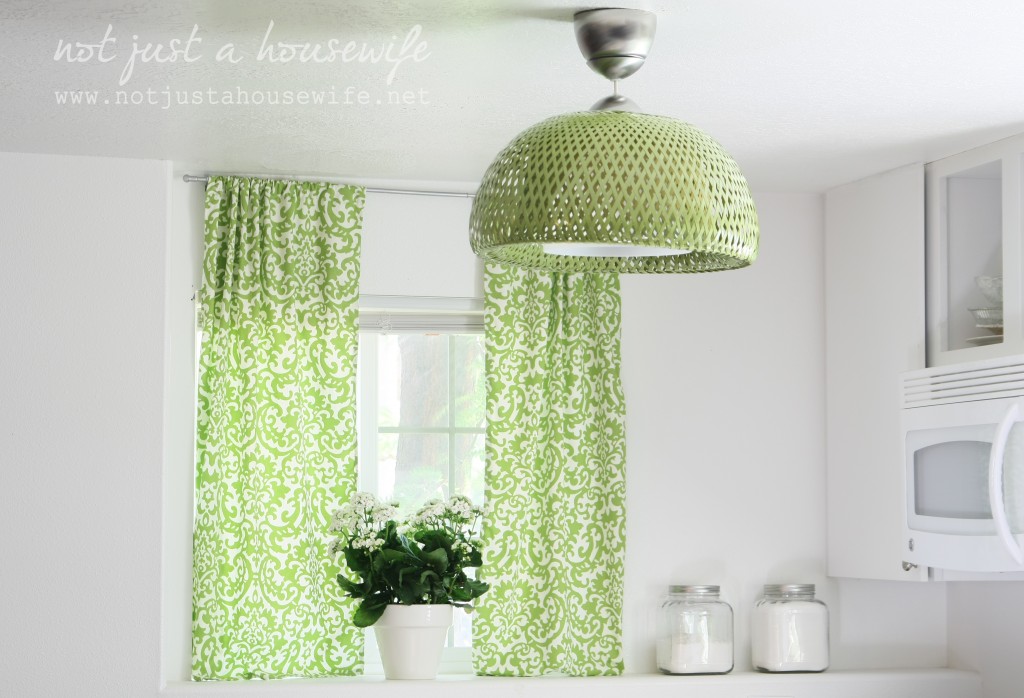 Aren't you dying over how cool the light is??? I adore it. It is funky and fun. It is from IKEA and started out tan. I used Rust-Oleum's Meadow spray paint on the basket part. The light fixture is called BOJA. 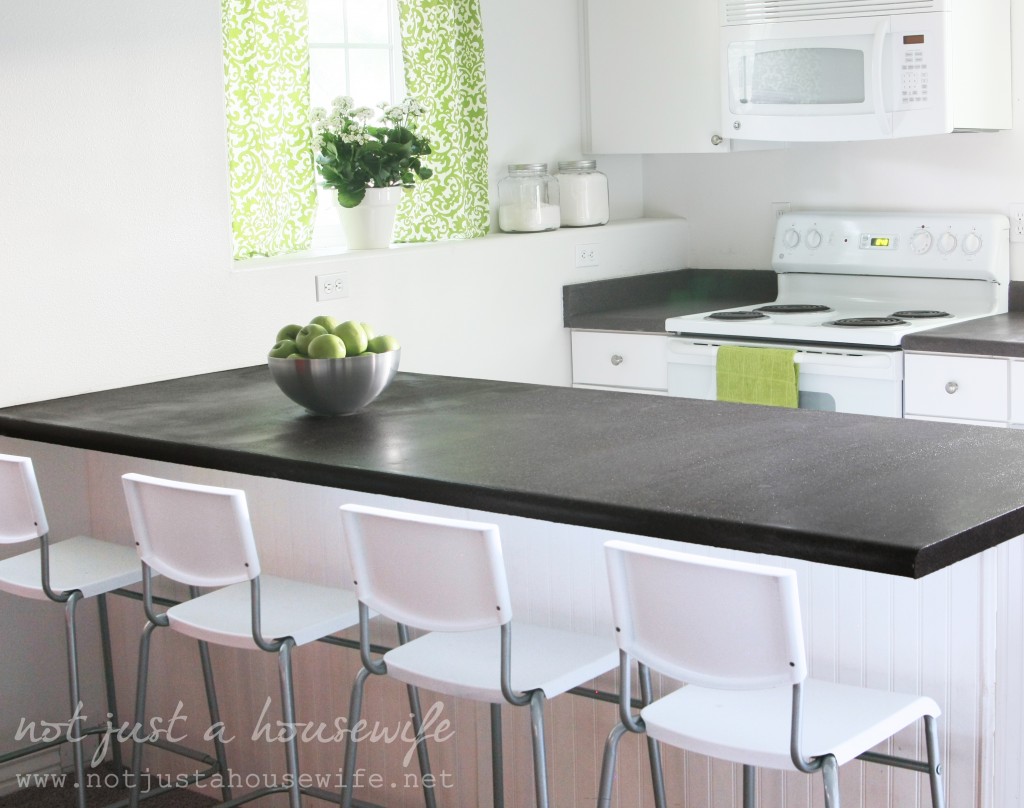 The old bar stools were too chunky. Visually they were too much. It made the area seem small. So I got new bar stools that were more open and light. They started out black. I sprayed them with a spray paint meant for plastic. I will admit  that I am worried about how they will hold up in the long run with 5 kids using them daily. I have used plastic spray paint in the past with success but never on something that was going to get that much wear and tear. The stools are also from IKEA and are called STIG. 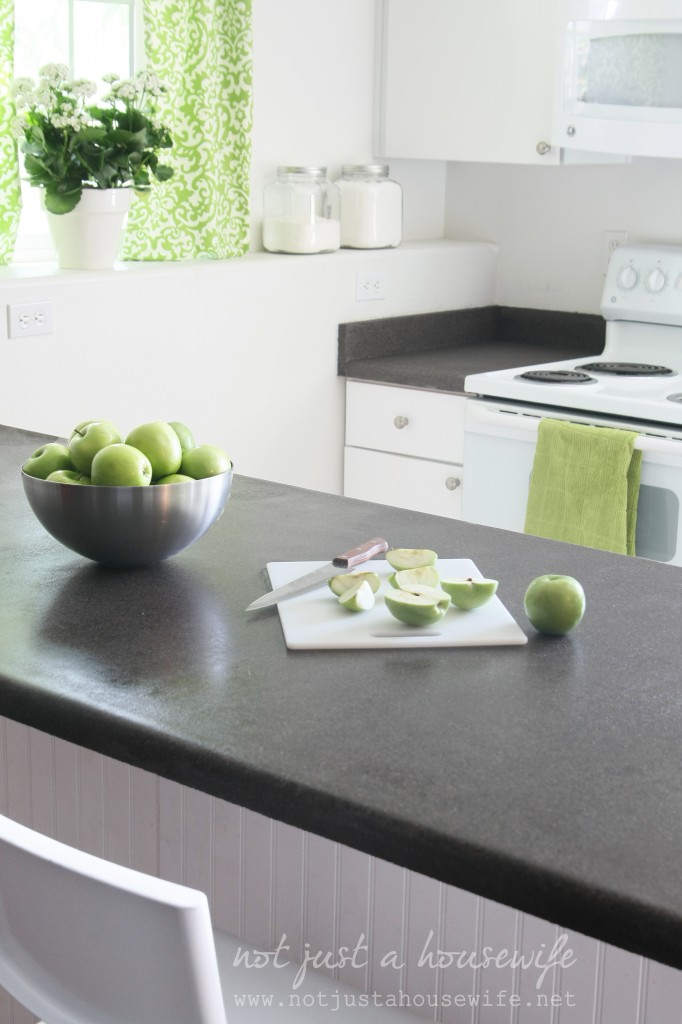 The bowl is from IKEA and only cost $5! It is called Blanda Blank. 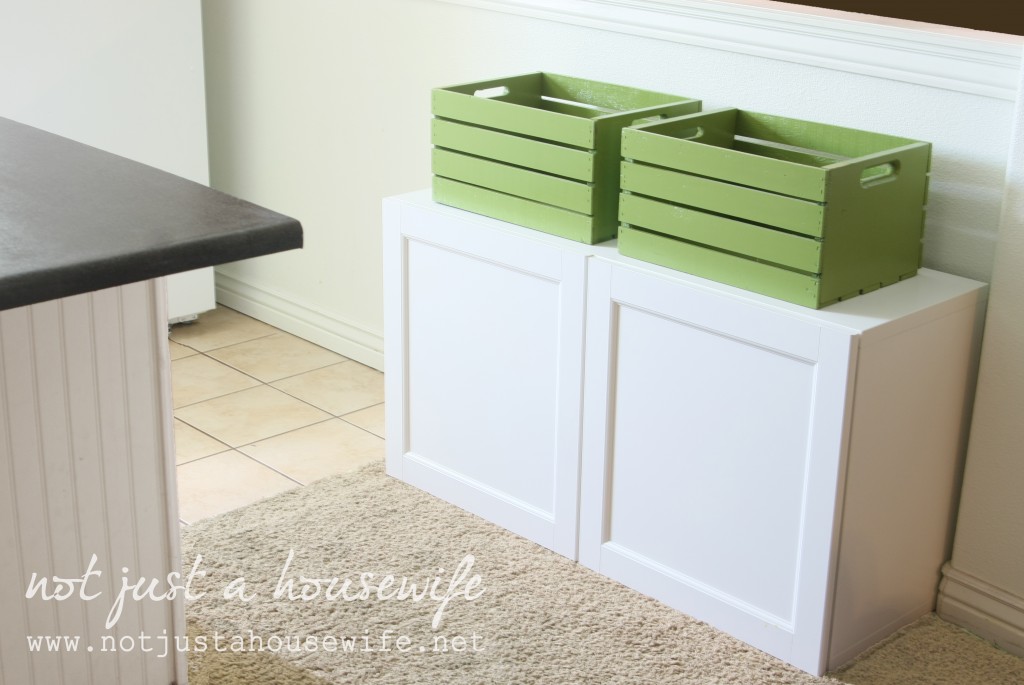 Previously there was a bulky, broken bench in this spot. It opened up and had storage which is why my sister kept it. Since she downgraded to a smaller kitchen, she need the storage. I replaced the bench with this BESTA cabinet. It blends into the white wall making it appear to take up less room. It also closely matches her kitchen cabinets. Plus it has more storage than the old bench! I spray painted two crates that are from Michael's with the same spray paint as the light fixture. They will hold cereal and snacks. 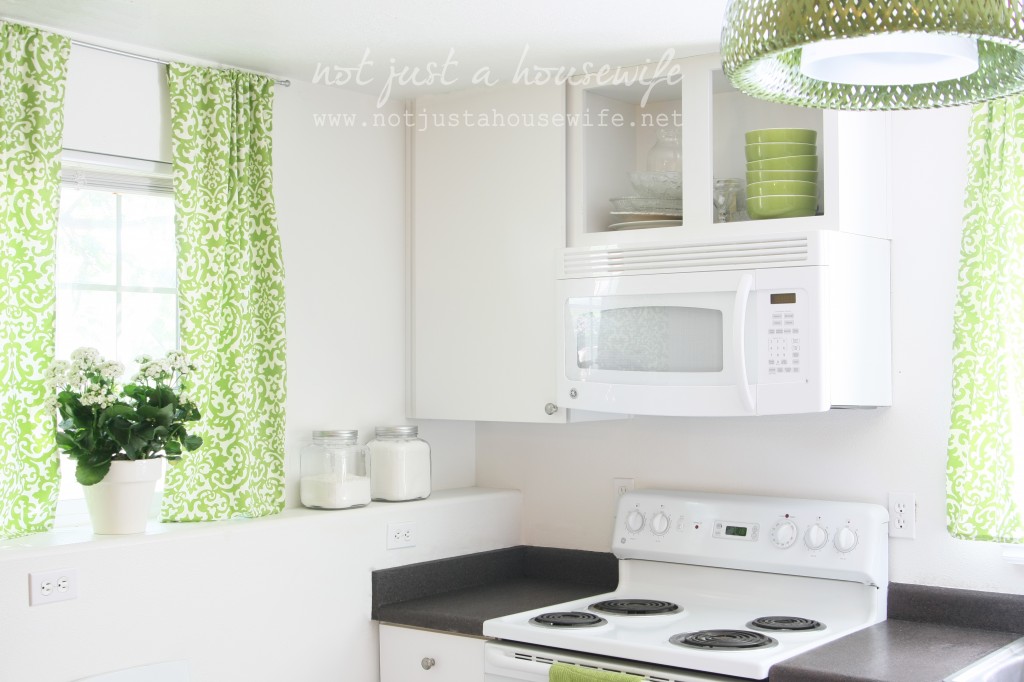 My original plan was to take her cabinet doors that were above the microwave and have the middles cut out and glass added. But the local cabinet shop was closed on Friday and Saturday so that didn't work out. Her cabinets are not solid wood or I could have done it myself. But I didn't want to risk ripping up the outer coating. So I opted to just take the doors off to create open shelving. If I would have had more money in my tiny budget, I would have bought more green dishes to go in there. And maybe a pretty white pitcher. 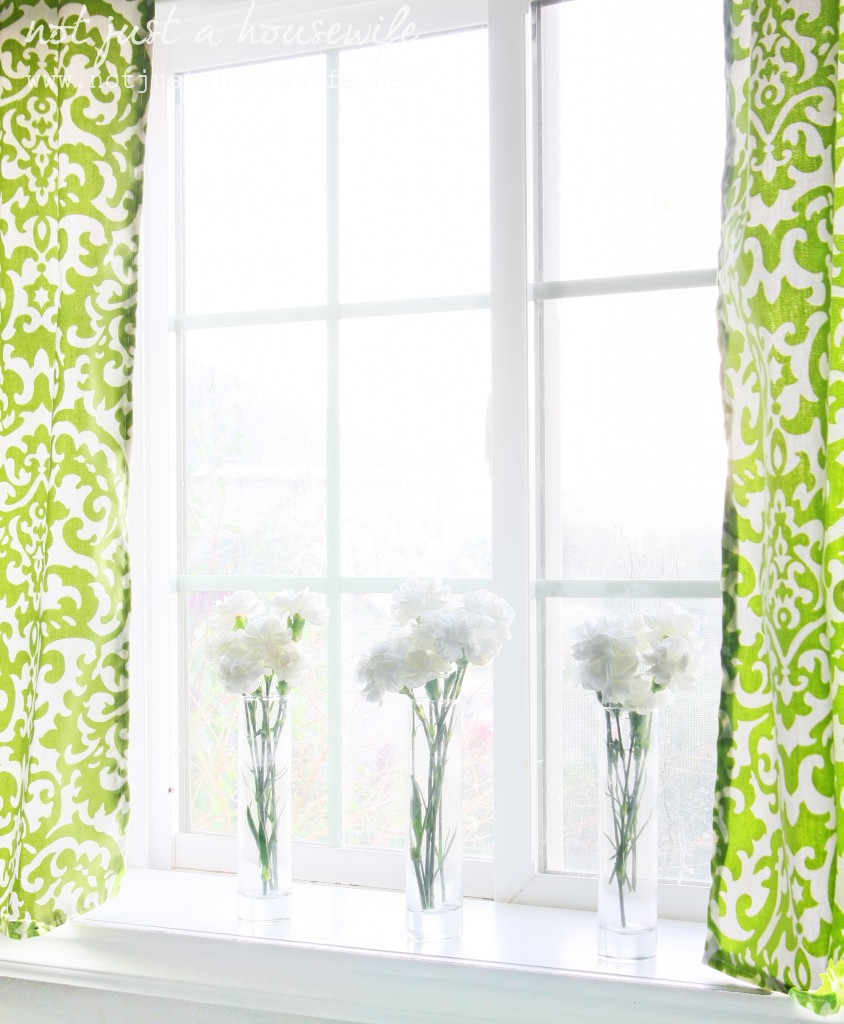 Her window sill was made out of the same blue laminate as her counters. I didn't want to rip it out and possibly cause damage, so I built a cover for it. I used a 9 inch board and some molding. It fits right on top! I think I am going to caulk it in place. 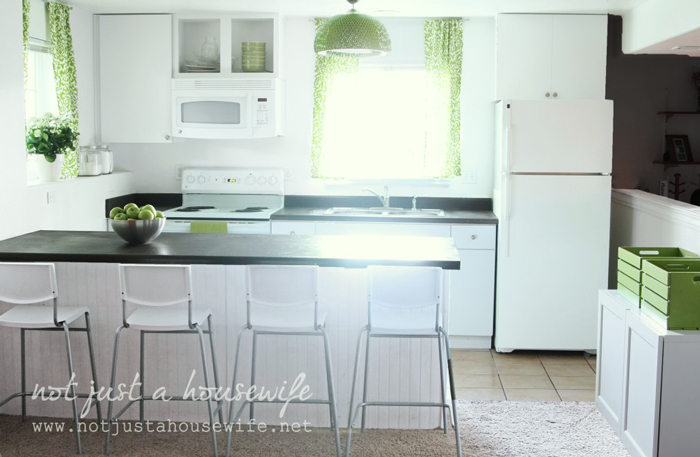 So to recap, here is what was spent and donated.

About $250 of product from IKEA

$and about $50 in spray paint and accessories.

So the whole kitchen makeover cost less than $600!

I will have a whole post about my experience resurfacing the counters. I need to go back over when the sun is not as bright and take some better pictures of the counters first.

And because we all love a side-by-side, here you go.

I know a lot of you requested a video of my sister's reaction but since she had just returned home from camping, I respected her wishes and didn't film her. But it was an amazing reveal!!! She actually came home early so we had to keep her busy until I could pull it together. It was a lot of work but so completely worth it :) 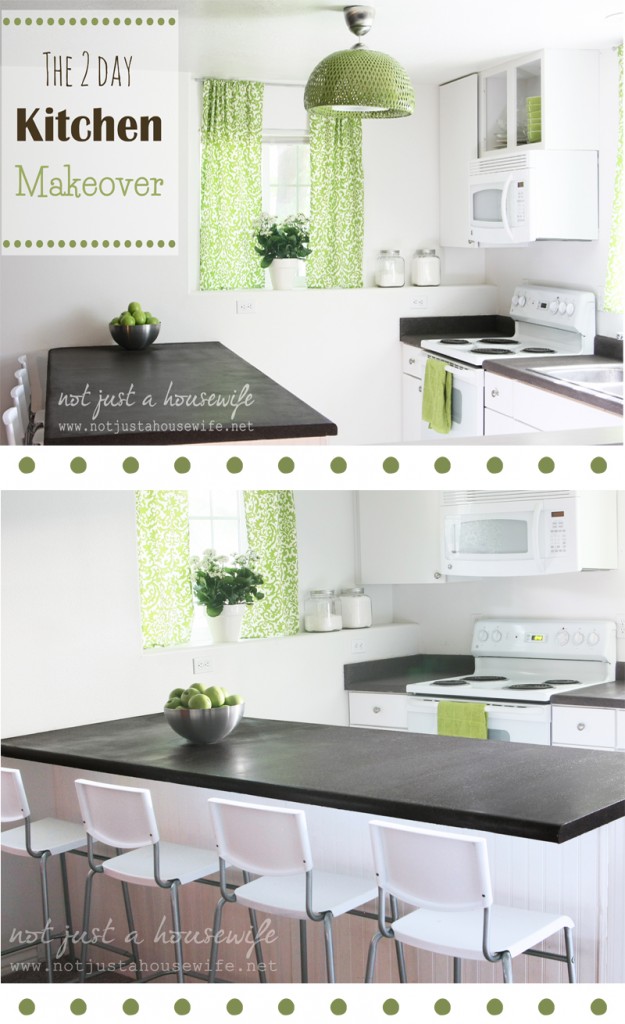