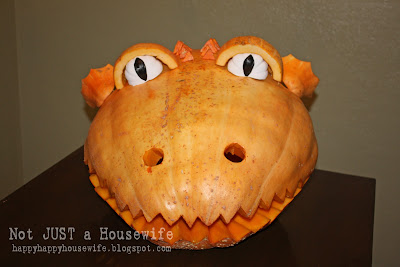 As I mentioned before, we did not grow pumpkins this year. I am sad and I have been reminiscing about what we have done in the past. Last year we had this big flat pumpkin growing in our garden. Every time I would walk past it I would think how UGLY it was. What a waste of a pumpkin. What was I going to do with it? Well one day it hit me. It looked like a dragon head! So my husband and I figured out how to make it and our kids helped. 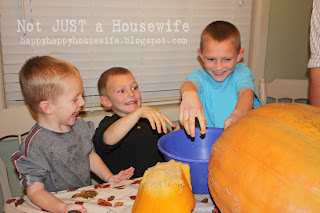 They loved playing with the guts. 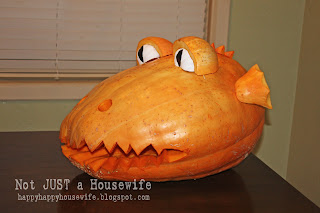 The eyeballs were those really small decorative pumpkins that we cut part off and then painted white. We cut up a small pumpkin to be the part over the eyeball. The parts of the small pumpkin that were left over became the ear flap things. The triangles that we cut out when doing the teeth became the spikes on the back of his head. Everything was attached with toothpicks. 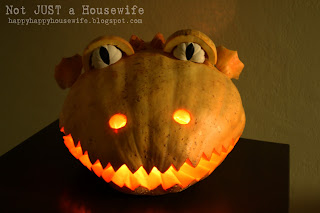 We put candles inside and it looked like he was going to breath out fire! We kept him inside so he wouldn’t get taken or smashed. But we positioned him right inside our front door so that the trick or treators could see him.
Do you have a pumpkin that you carved that you would like to show off? I want to do a post showing a bunch of carving and decorating ideas. E-mail me your pictures if you want to be included!