It is time to announce the winner of my little giveaway! First let me just say that I am blown away by all of the visitors, comments, and new followers!!! So to celebrate, I already have another giveaway planned for the near future. But lets get back to business. The lucky winner is Jen Sully!!! Please e-mail me so I can get your address. Thanks again everyone for your support.

Now on to a DIY project. I am on a quest to get you to use power tools (if you aren't already)! I have a boat load of past projects from before I blogged. I apologize for not having "during" pictures. But I do have some new project in the works where I will. Here we go. 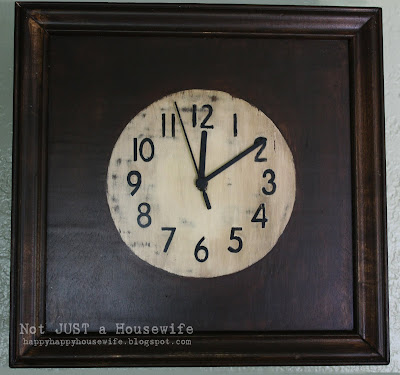 When my husband was still in school, we rented the upstairs of a house and the owners lived in the downstairs. The owners had installed a meter box in our "apartment" to determine our part of the utilities each month. Meter boxes are ugly. And to make matters worse, it was the first thing you saw when you walked in. Now most people would have just lived with it, especially being on a starving student budget. But it bugged me. It bugged me bad. I was determined to find a way to cover it so you would never know it was there. It stuck out pretty far so obviously a picture was out of the question. I finally came up with this clock.

I made a simple box out of plywood. I used stainable wood glue and my brad nail gun. Then I bought one of those super cheap ($5.00 at the time) plastic clocks at Walmart. I took it apart so I could use the motor and hands. All I had to do was drill a very small hole in the center for the little poky part ( Yep. That is the technical term) to stick through and then attach the hands. 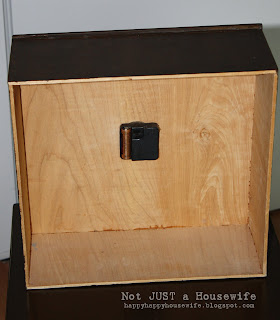 I bought some molding to frame the outside. I cut them with a miter saw at a 45 degree angle and nailed them with my brad nailer. I stained it and then it was ready for the face!
I used the paper from inside the cheap clock that had the numbers on it to make a stencil. I used my Exacto knife to carefully cut out the numbers. I taped it to the front of the clock and first traced it so I knew where to paint the cream color. Then when the cream paint was dry I taped it back on to do the stencil work. It wasn't super crisp but that was okay because I knew I was going to be sanding it. If you want the numbers really precise, then use some kind of spray adhesive to hold the stencil down. You should also paint cream first so that it seals. Then paint the black. 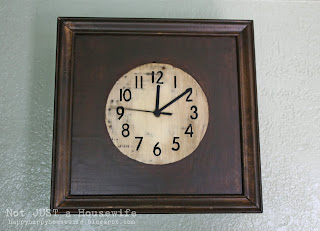 School is far behind us and we live in our cute house now but even though this isn't being used to hide anything, it is one of my favorite things! 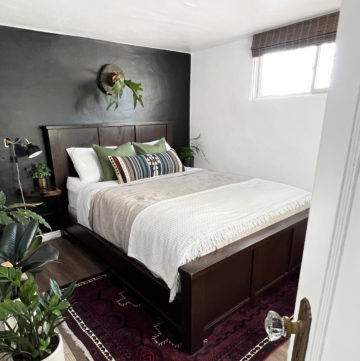