I have partnered with P&G and Home Depot again! I have created a fun project and there is a GIVEAWAY! Stay tuned for the giveaway details later in the post.

This outdoor projects has been on my to-do list since last fall. I cooked up this idea last year as I was reclining in my chair and staring at the ugly backside of my house. I wanted to be able to hide the electrical boxes but be able to access them easily if I needed to. My first thought was to use barn door hardware but I soon realized that would not work since the door would be flush against the house and that was where the metal boxes protrude. But then I had a better (and less expensive!) idea! 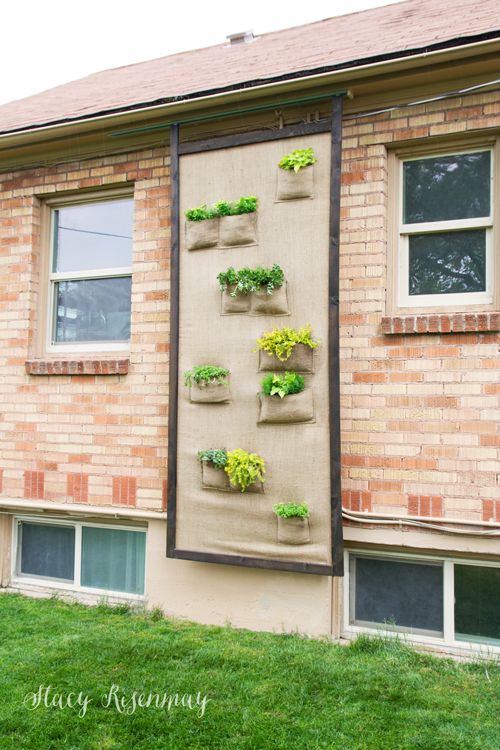 * Having now made this, there are a few things I would do differently if I were to make this again. I was so paranoid that it was going to be too heavy that it affected some of my decisions. Now that I know how light weight it is, I would change a few things. I will point out what I would change as we go along.

I got my burlap and spread it out. I used tape to play around with the placement of the pockets. That way I could stand back and look at it and if I didn't like where they were, it was easy to change. My burlap was about 4 feet by 9 feet. 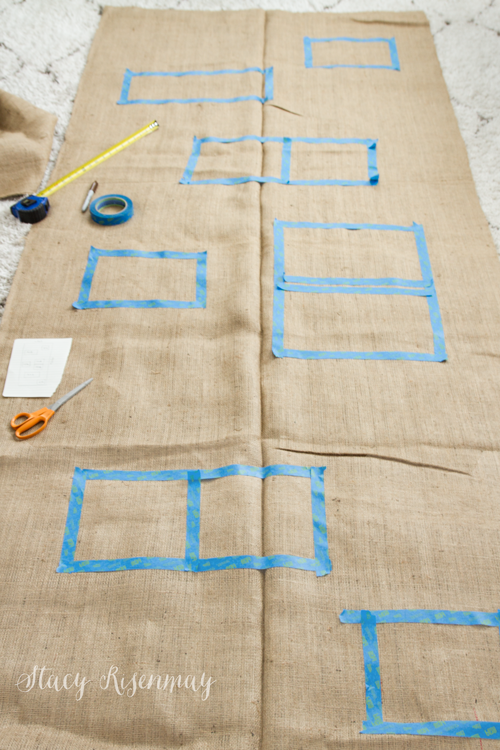 You guys, I don't sew. I mean, I sometimes slap together a throw pillow but it always has wavy seams. And it makes me want to swear. So If I can sew this, you can too!

And let's pretend not to notice the crooked pockets when we look at the final picture again.....

I cut out the pockets making sure to add an inch on all sides since I would be folding them over and sewing. After folding over and sewing the raw edges, I hand sewed the corners onto the large piece of burlap where I had previously decided they would go. This held them in place, making it easier to sew them with the machine. 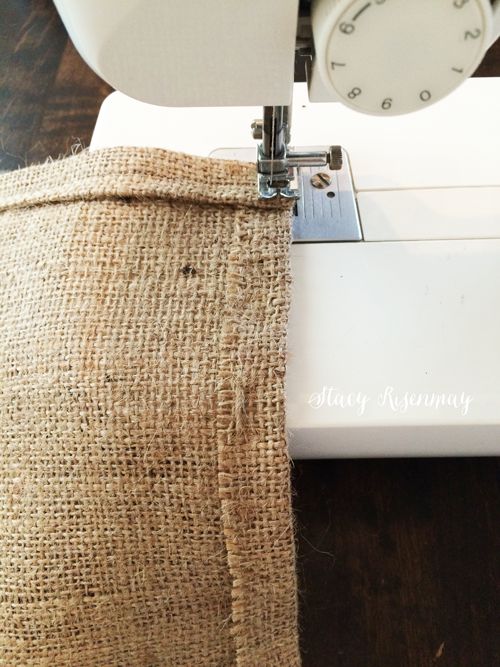 Time to make the frame! I chose 1x3 boards because I was worried about the overall weight. If I were to do this again, I would use 1x4s so that I could get the 10 foot length. I had to add length onto these 8 foot boards and it was not only an extra step, but they will never be as string as a solid board.

I drilled pocket holes and attached the frame together with screws. 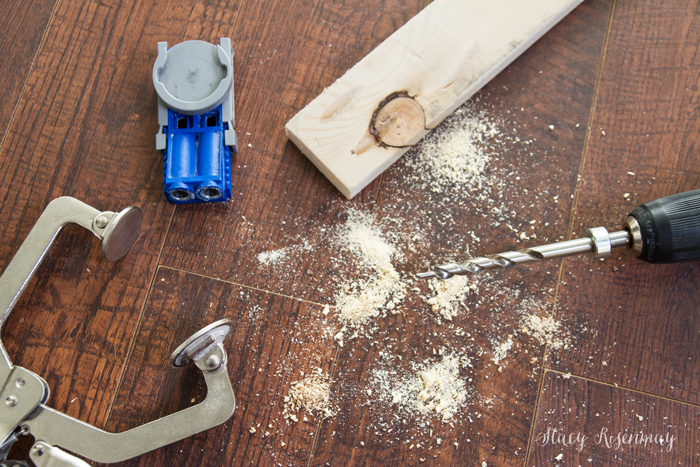 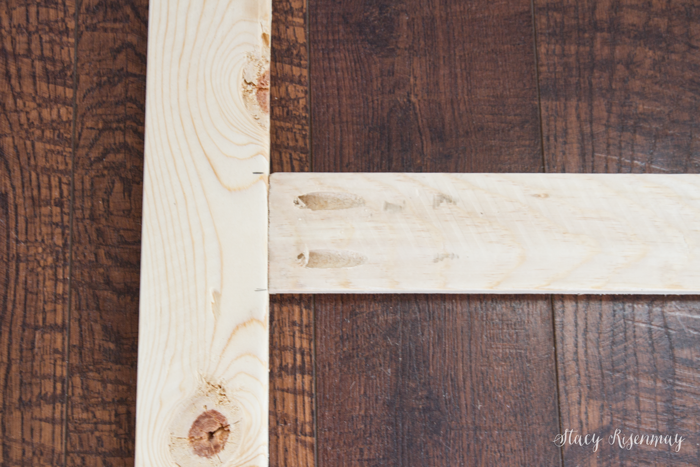 In order for the cross boards to not be seen on the front, you will have to add them after you staple on the fabric. I neglected to take a picture of this step since it was rainy and I was trying to hurry and finish the project.

If I were to do this again. I would build a whole new frame with cross boards to screw onto the first frame that had the fabric. The stapled part would be sandwiched between two boards. 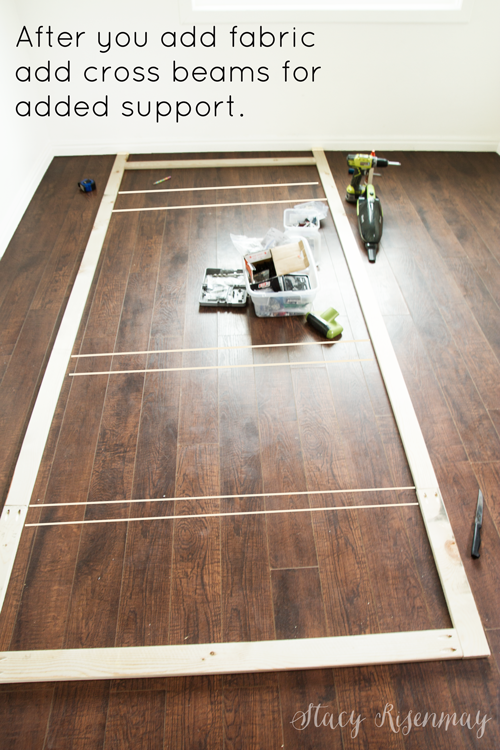 I sanded the frame really well and then stained it. I chose a dark walnut stain since I wanted some contrast. Plus a dark color hides any flaws (or my case, seams).

Make sure to protect your work area. I laid down some paper towels. Paper towels are a MUST when staining. I use them to wipe off the excess stain and to protect from splattering when clothing the can. 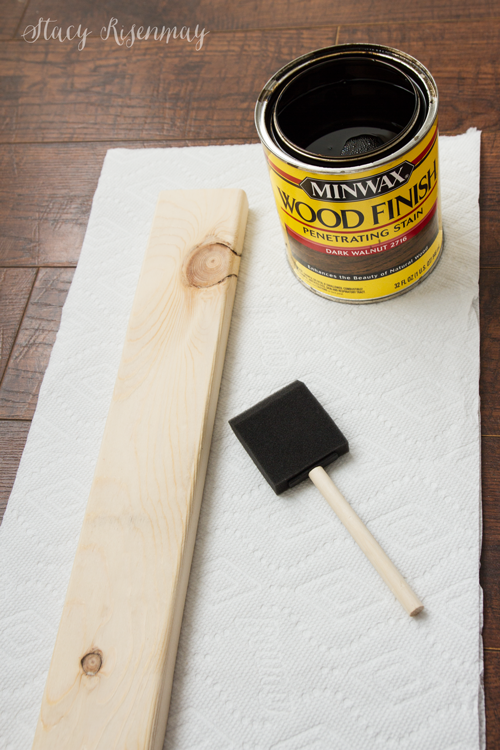 I decided to wet the burlap down before stapling it to the frame. The idea was that it would stretch more and then when it dried it would be really taut. I am not that familiar with burlap so maybe this part was not necessary. 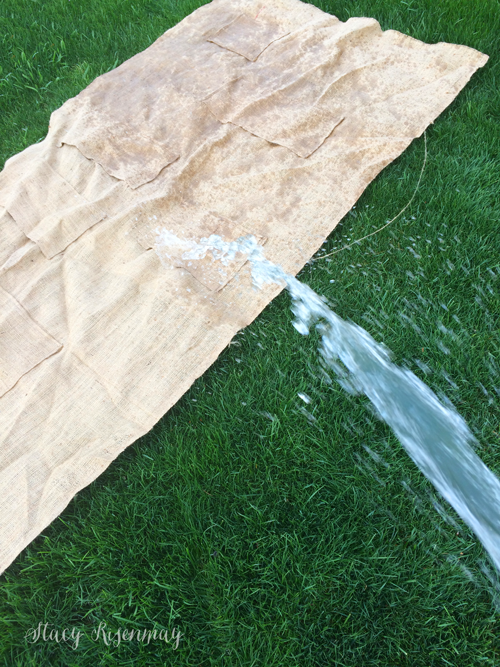 Once the fabric had dried enough that it was wet, but not dripping, I stretched and stapled it onto the frame. It is helpful to have someone help you.  I also kind of moved around and did small sections at a time to make sure it wasn't being pulled crooked. 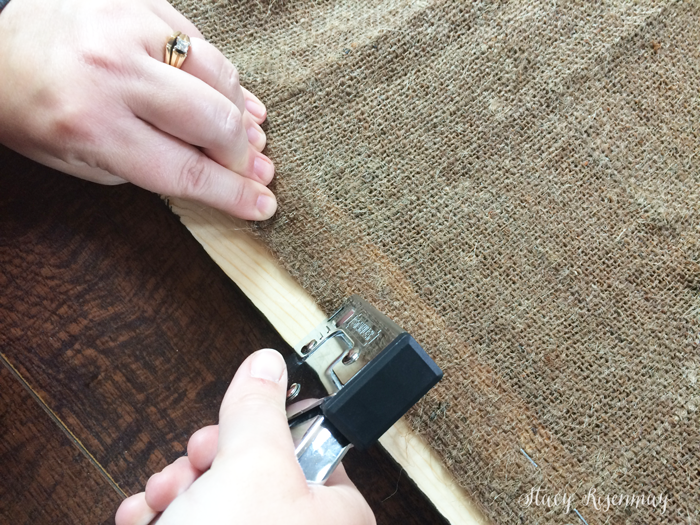 In order to make this slide, you will need to install a closet door track. I bought the 72 inch track kit for about $14. I screwed it into the eave of the house.

For the record, I am terrified of heights. TERRIFIED. I think the highest I have ever gone on a regular ladder is the 3 step. This girl right here climbed to the top of what I call the "scary ladder". It may have taken me 10 minutes and several pep talks (my friend who helped can attest) but I did it! I planted the plants before I hung it and I think I would have waited until I had it hung. Either way you have to be on a ladder to do it.

Before you start putting plants into the pockets, add some felt. Since burlap is such a loose weave fabric, it allows a lot of air through it which drys out the plant. Plus, dirt can escape when it is watered. The felt helps retain the water. I bought plants that I thought would do well like Stonecrop, Creeping Jenny, Asparagus fern, and sweet potato vine. 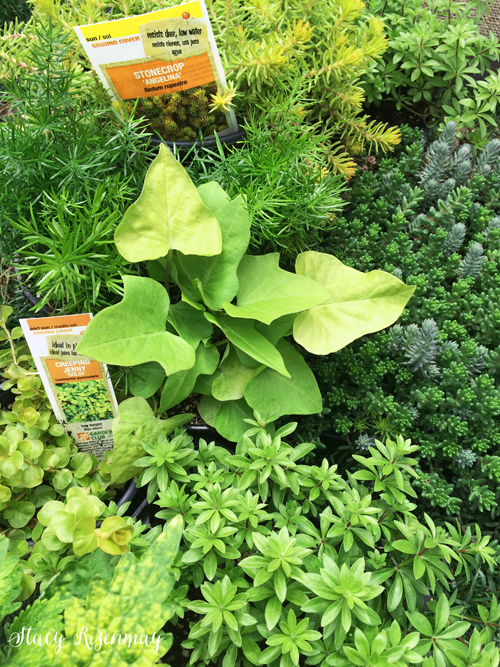 When I need to water it, I just hose it down :) 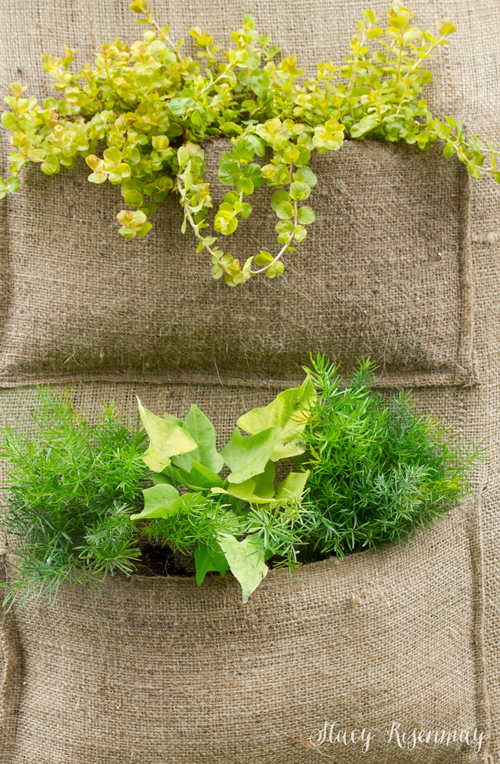 Overall I am really happy with how it turned out. I made a space at the top that didn't have fabric because I was worried some of the wires would get in the way and snag on the fabric. That ended up not being a problem and it would have looked better to have the fabric go all the way to the top.

I would have made it longer too. This is 9 feet and I think if I had used the 1x4s that were 10 feet it would not look like little Jimmy's floods. I debated on the length only because we may build a deck and I didn't want this to bee to long if we do that. 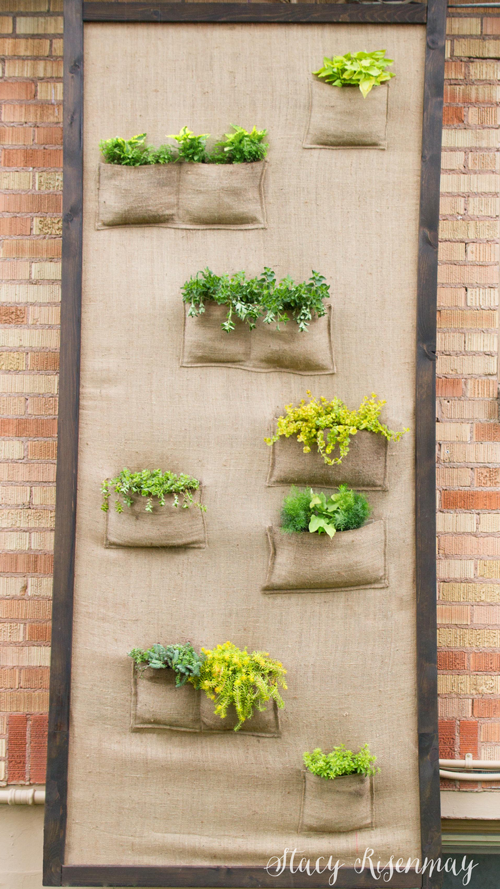 I went to take pictures and noticed how dirty the windows were. I had already put the big scary ladder away and really didn't want to get back up. I grabbed my Swiffer and it did the trick! 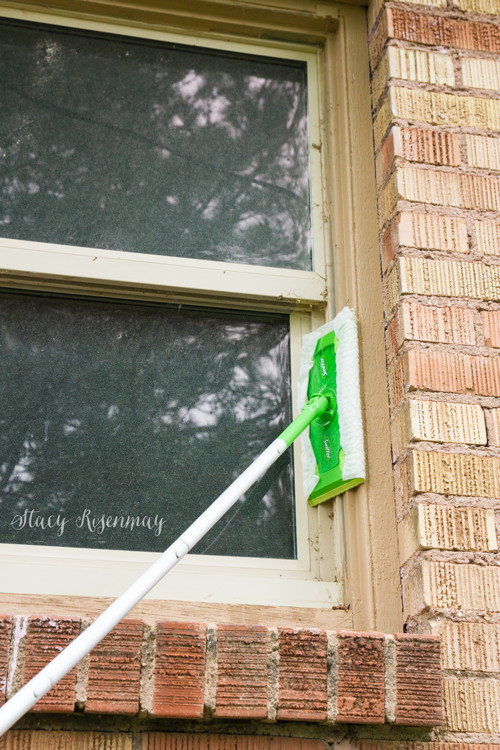 The sliding wall is so light weight that the wind was pushing it around a bit. I added a simple hook and then wound some wire around the conduit on the back of the house. It works great! 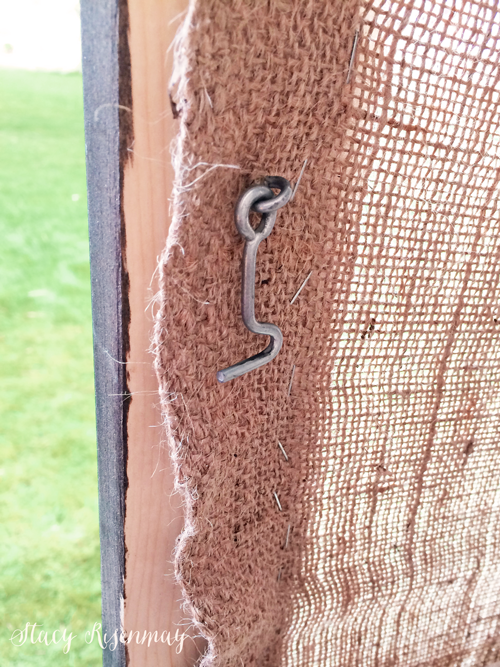 The other thing that I did not anticipate was that the closet track does not have ends that prevent the rollers from going off track. Normally the walls on the closet do that. I screwed a small block of wood into the eave.

See, I figured out all the ins and outs and made the mistakes so you don't have too! 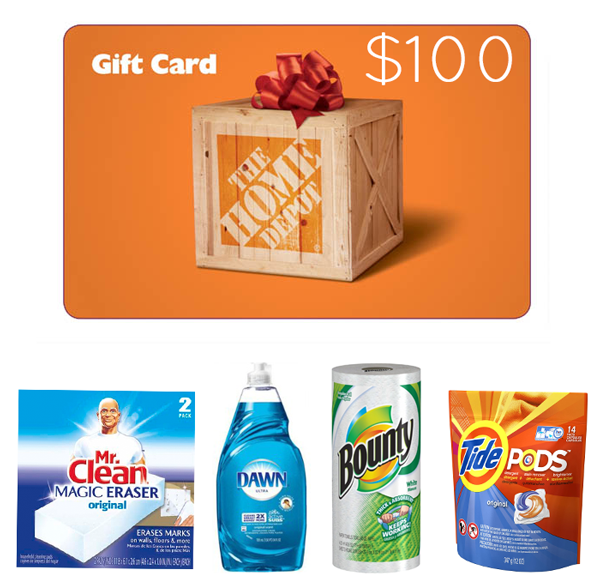 Thanks to P&G, one lucky winner will win a $100 Home Depot Gift Card as well as a bunch of P&G products! It will get you ready for spring cleaning and spring projects :)

Enter below using the rafflecopter widget.

Must be 18 years or older to enter. Must be a US resident. Giveaway goes from April 29th until May 9, 2016. Winner will be notified via email. Winner has 48 hours to respond or a new winner will be chosen.

This was a sponsored post brought to you by Procter & Gamble and The Home Depot. I was compensated for my time but the project idea and opinions are all mine!