I have never been gone longer than 4 or 5 days with my husband and kids. And we have not left the state and gone on any sort of vacation in 2 years. And the last trip two years ago was camping (not a real vacation in my book). Before that it had been another 2 years. So this trip to Idaho, Washington, and Oregon was very much needed.  For those of you who missed my original post, my husband's brother paid for us to travel up and help them move in and decorate their new house. They live in the Seattle area and we were able to stop and see family along the way.

I am trying hard to put into words my thoughts about this trip. Yes, I had fun painting and building things at the new house and seeing family we don't get to see often, but there was a lot more to it than that. I had several moments of clarity. I had some honest moments with myself. And I had some reality checks. In many ways I hit the reset button for my life.

I was forced to "turn off" technology for most of the time I was gone. I did not have access to internet on my laptop or any other computer 90% of the time. I was able to pop onto Facebook here and there with my phone, but that was not often. At first it was hard. Harder then it should have been. That was the first honest conversation I had with  myself. I was used to checking Facebook, my stats, twitter, my blog, email, Pinterest, etc. MULTIPLE times a day. And when I couldn't, I was nervous. Halfway through the trip though, I didn't even think about it at all. It was very freeing!!! I don't know the last time my blog wasn't in the back of my mind at all times.

My husband and I had a lot of time to talk about our situation. We are very hopeful that he will find work soon :) I think he needed this trip more than any of us.

Some of my moments of clarity are not something I want to share here. They are very personal. But I will say that I fell like everyone should take some time to think about the parts of your life where you are struggling and have an honest conversation with yourself. Sometime I don't want to admit my faults. . . even to myself. But you can't change until you do.

My favorite moment happened at the Oregon coast.......

Before my husband was laid off and we found out we would be getting a decent tax return we knew we wanted to take a family trip. I called my kids in one at a time and asked them if they could go anywhere in the whole world where would they want to go. My (then) four year old was a little overwhelmed by the question and couldn't decided. My two oldest both said the Oregon coast. They picked that over Disneyland! Our family has an obsession with the beach, especially the Oregon coast.The last time we were able to go was 4 or 5 years ago. They have been begging to go back ever since. But my husband lost his job a few days after that conversation so we thought that was the end of that.

We had toyed with the idea of going to the coast since we were pretty close already. I wanted to make sure we got a lot done at the new house and that we were earning our keep so to speak. Plus we were watching the weather and it didn't look good.  Lots of rain mixed with snow on the Oregon coast. There was a storm that was suppose to hit on Thursday (the only day we could go ) and I was devastated. I know the weather can change so I kept an eye on it. The day before, I checked and it was now suppose to be partly cloudy and in the 50's.  We decided to go for it. We told the kids and there was a lot of high five-ing and cheering :)

We left Wednesday night at bedtime and traveled all night to Seaside, Oregon. We slept in a hotel for a little bit and then got up early so we could go to Haystack Rock to see the tide pools.

It was gorgeous. Stunning. It ended up being sunny without a cloud in the sky, 60 degrees, and no wind. Not even a breeze. It literally was perfect weather for us. We saw lots of creatures in the tide polls, played in the sand, collected shells and sand dollars, and chased the waves.

Because it is the off season for the coast it was pretty much us and the locals. ( P.S. they were all darling and I want to move there!!!) They kept remarking on the incredible weather we were having that day. They said to enjoy it because it was going to storm again for the next week or more. They had not seen such a nice day ALL year. Now, you could argue that it was a coincidence that on the only day we could go to the beach that the weather was amazing. But I know that we needed that sunshine. I believe in a God who knows us personally and knows what we need at all times.  I am not saying we were the only ones who needed sunshine that day, but I know we were among those that did.

Something about being next to the ocean makes me feel small. It puts things in perspective. I can see the bigger picture. That and knowing God had given us sunshine made that day so special. 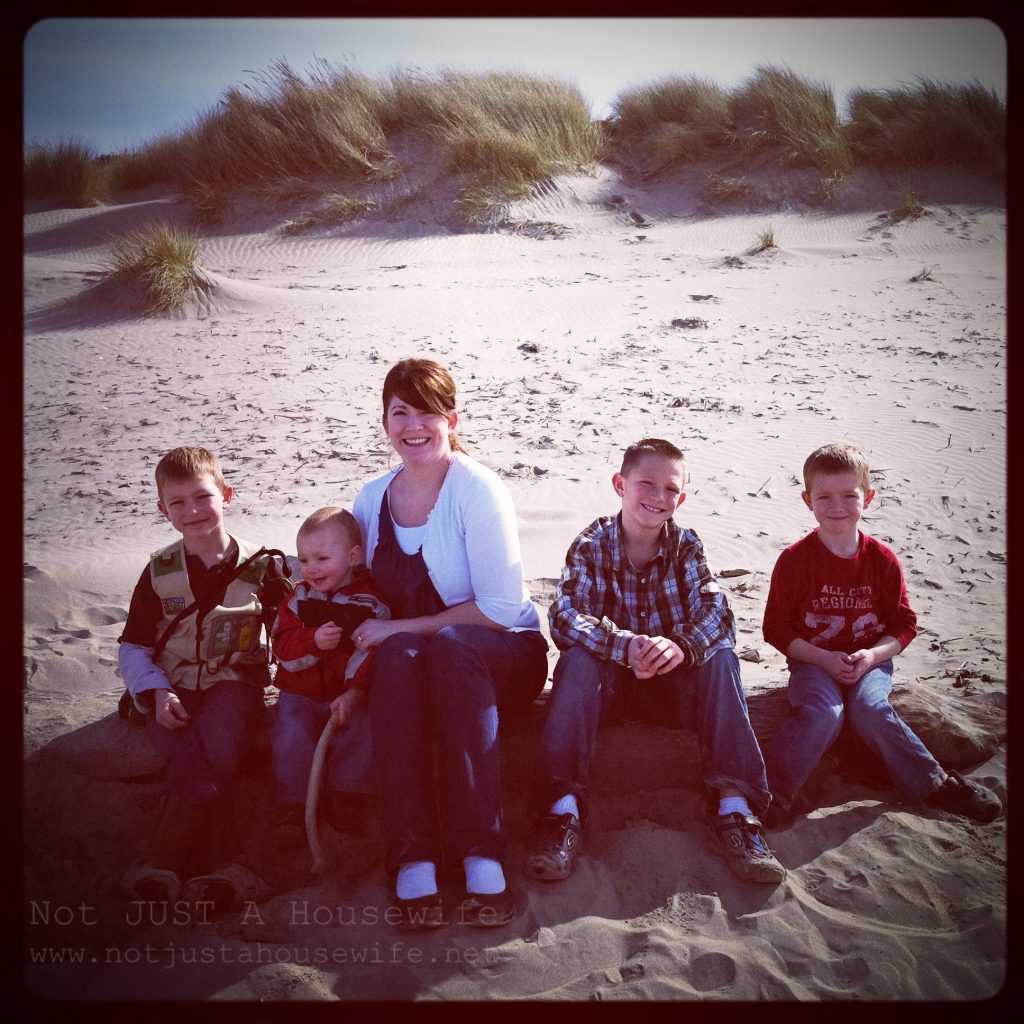 So what does this all mean? Am I going to "turn off" completely? Heck no. In fact, I can't wait to dig in and blog my little heart out! But it means that if my site crashes I won't freak out. If my stats are low, so what? If I have zero funds for projects I will just get more creative. And if I feel like I need to spend the day in the backyard with the kids making mud pies instead of whipping out some super amazing DIY project I will AND I won't worry that I am not blogging that day.

Thanks for being patient with me as I get caught up with emails, blogging, and LIFE :) I will post pictures of the trip and the projects from the house starting Monday.  I love you guys!!!