In honor of Mother's Day I have a few special things to share. Please read clear to the end. I am writing this because I want to. Because I feel it is important :)

The Day I Was "Born" A Mother

I remember when I first became a mother. We were young and had only been married for a year and a half. I think because we were only in our early 20's we had confidence that everything would go as expected. It was like some of the "I am invincible" attitude from the teenage years hadn't fully faded yet. I did have some fears about the baby being all right. But I never thought about anything happening to me.

I had the best pregnancy. The BEST. I gained 60+ pounds because I think I took the whole "you are eating for two" a little too far. But overall it went really well.

I was scheduled to be induced and low and behold I went into labor on my own that day before I even left for the hospital. You guys! Start to finish I was in labor less than 2 hours. That is starting at when I felt my first contractions at home to me holding my baby. Crazy! I had rented some movies from Block Buster (VHS, yes, it was awhile ago) and had Jolly Ranchers (clear candy was the only "food" they allowed) and I was ready to rock the whole labor thing. But I got there, they hooked me up to machines, I was pushing and BAM! I had a baby. There were moments after that I almost felt jipped out of the real experience. But after 3 more babies I got over that!

When my little boy came out I heard the doctor yell "Three cords! Three cords!!!" I thought I must have given birth to a mutant child that had 3 umbilical cords. But when I sensed the urgency in the doctor and nurses I realized it must mean something else. My sweet baby had been born with the cord wrapped around his neck 3 times and was blue. Luckily they got it unwrapped and he was treated quickly. Afterward the doctor said he had never had a baby born so quickly to a first time mother. He said if the baby had taken any longer to come, we may have lost him. I know the Lord played a hand in getting him here quickly so he could be taken care of.

Everything seemed fine right after he was born. I felt great and my baby latched on right away to nurse. I was moved to a recovery room. The nurse told me to ring for her when I needed to go to the bathroom. I was feeling strong and didn't want to bother her. Again, it was the whole "invincible" mindset. I got up to go and by the time I reached the bathroom I was heavily bleeding. I hemorrhaged and ended up passing out on the floor. When all was said and done I ended up being fine and I followed orders after that. 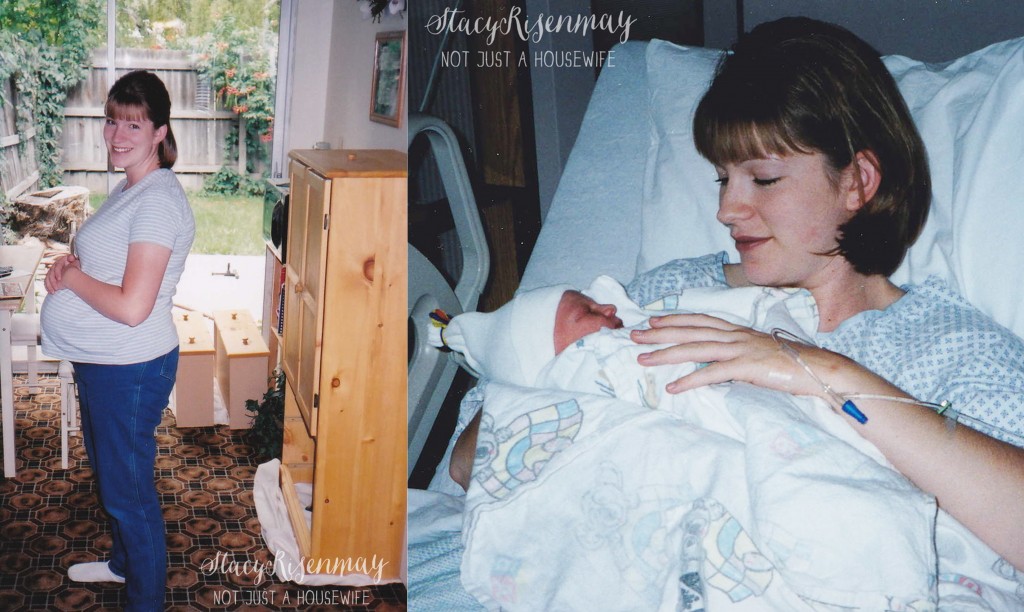 (This prego pic was 2 weeks before I delivered. I love that there is a DIY project next to me. I was workin' it clear until I had the little guy! This piece is now my computer cabinet in my office.)

Even after all of that I ended up doing this whole pregnancy thing 3 more times. Because it is true. You do forget it all as soon as they place that precious baby in your arms. 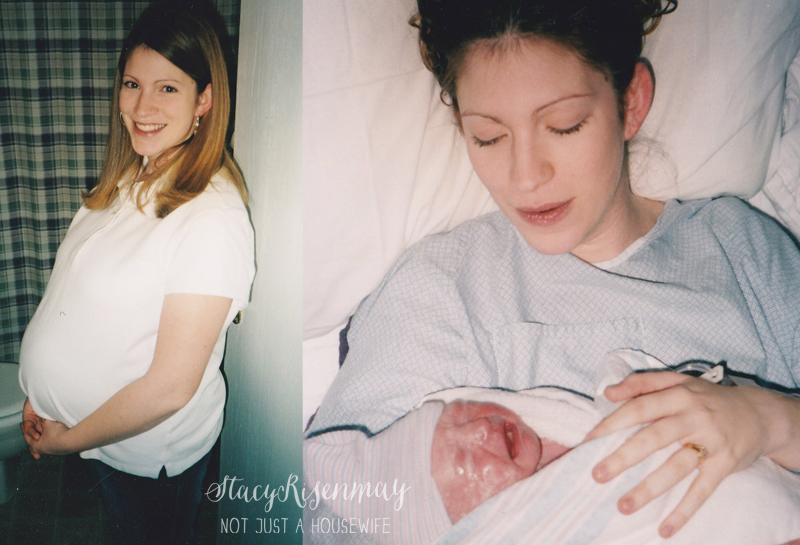 (Baby #2: We had moved to Las Vegas during my pregnancy. We didn't have a second car and we didn't know our neighbors yet. My husband was going to school full time and working full time so he was not at home much. Given the situation and how fast my labor was with the first one, my doctor decided to induce me with this baby at my due date. All went well. It was a little longer this time at 4 hours and he was my biggest baby weighing 8 pounds 6 ounces) 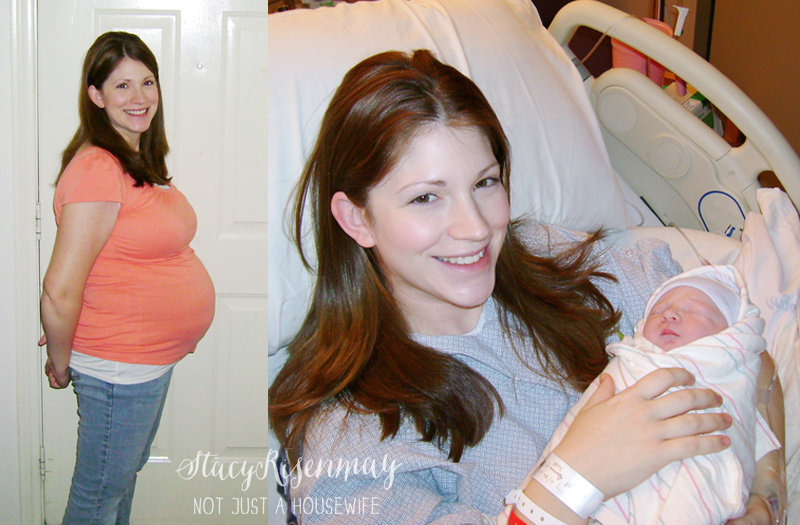 (Baby #3: This guy surprised us in the middle of the night. My water broke about 2 am. I woke up my husband and it was just like in the movies. "Honey! My water broke! It's time!" He woke with a start, told me that was great, and then rolled back over and fell asleep. After a few shakes and repeating it, he eventually woke up all the way. We drove to the hospital and a few hours later had another sweet boy. I can't tell if it is the waaaay to thinly plucked eyebrows or the fact that I had had very little sleep, but I look WORN OUT.) 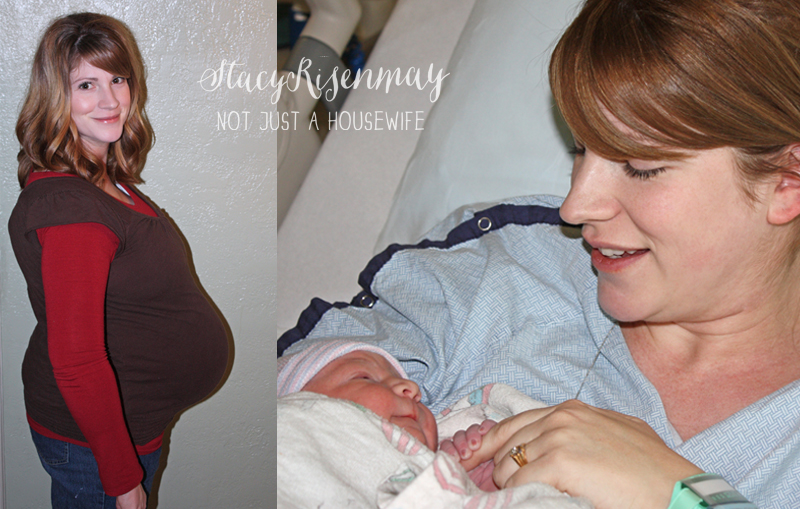 (Baby #4: I almost didn't make it to the hospital with this guy. I was over confident. This wasn't my first rodeo and I knew what it felt like to be in labor. My mom stopped by and I was cleaning. I kept saying my back hurt and that I probably shouldn't be cleaning so much. My mom suggested that it was labor pains. No. It couldn't be. I knew what labor felt like and I was just over exerting myself. My mom wanted to take me to the hospital but I refused. I told her I would drive myself when the time came and that it may not even be that day. I had too much to get done. An hour later I hurt so bad I couldn't complete a full sentence let alone drive to the hospital. My mom watched the kids and my sister drove me to the hospital which was a few blocks from my husband's job. This little guy made an entrance soon after that.)

So aside from it being Mother's day soon, why am I sharing this? 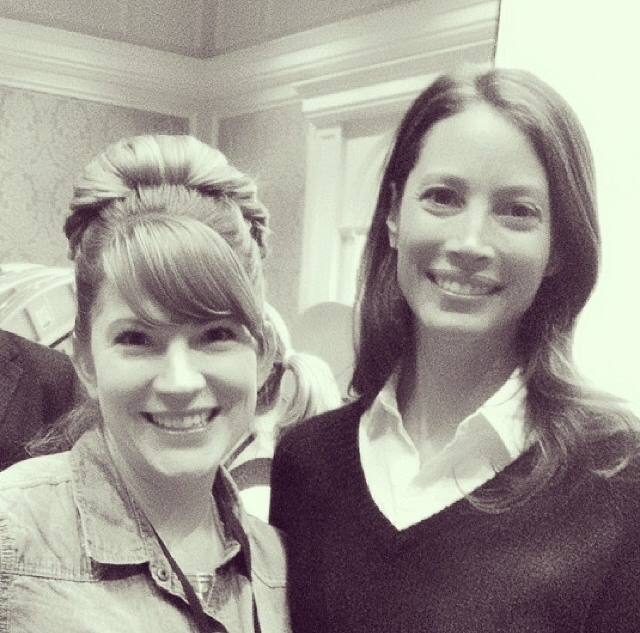 This January I had the opportunity to meet Christy Turlington Burns at ALT and she shared her story about becoming a mother.

"Then, after a perfect pregnancy and a delivery that went just as I had envisioned it would go, I experienced a complication that while frightening and totally unexpected, was managed efficiently by my midwife and the obstetrician who backed her. In the months that followed the birth of my daughter, I began to consider what this complication could mean for women without access to pre and postnatal care and what I learned was it can, and often does, mean death for thousands of girls and women around the world. In fact, Post Partum Hemorrhage (PPH) is the leading cause of pregnancy-related death in the world, including in the US.

Once I learned that hundreds of thousands of women around the world were dying each year I needed to know why. And when I learned that almost 90% of these deaths are preventable I committed myself to doing all that I could to stop these senseless deaths." -Christy Turlington

Christy started a non profit charity called Every Mother Counts. I was so moved after learning about it that I went up after and asked how I could help. The biggest way is to to spread the word. So I am.

Because it is near Mother's Day, they are having a campaign called Every 2 Minutes (#every2). It is called that because in the world every 2 minutes a woman dies as a result of child birth. Every.Two.Minutes. You can read more on their site and watch a clip of her the documentary as well.

So here is what you can do to help. You can chose 2 of the things from the list:

And if you happen to be a blogger, you can also write a post as another option :) For all other options on how to help, visit their site.

I am glad I went to ALT and learned about this otherwise I would have had no idea it was such a problem. Thank you for taking the time to read :)