We bought a cute little 1938 home several years ago and began fixing it up. The upstairs bathroom was one of the last rooms we did. We waited so long to do it because my husband and I couldn't agree on what to use for the counter top. The floors were already a pretty marble and we wanted to keep them, but we had different opinions on what would go with them. I finally decided that there wasn't any reason why I couldn't update everything else and worry about the counters later. I tackled the cabinet first. I had entertained the idea of buying a new one. But I couldn't find one that was the right dimensions. And the ones that I could find that were close had feet. I wanted to add a laundry chute under the sink so feet wouldn't work. I have refinished furniture in the past so I decided to just dig in and do it. . . all 70 years worth of paint! 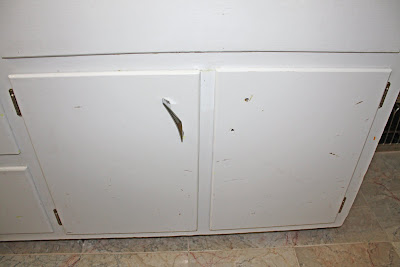 I started by striping off the old paint. There were so many layers of paint that it looked gross. Where the paint had chipped there were big divets. There were that many coats of paint! I didn't want to sand because of possible lead paint issues so I used a paint srtipper called Ready Strip. It is a gel that is green and it turns white when it is ready. It takes the guess work out of it. I have used the traditional paint strippers that are liquid and they are messy, they stink, and are dangerous because of all the chemicals. This stripper is biodegradable, enviormentally safe, cleans up with water and doesn't smell very much. It claims to to be oder free, but does have an oder. But it is very mild compared to the others. I highly recommend it. (I totally just sound like a commercial. . . ) I didn't worry about every little bit of paint off since I was just going to be painting it again. I just wanted it to look smooth.
Next I painted them. I bought some molding. The bathroom door was the original door so I tried to match the detail on the door with the molding I bought for the cuboard doors. I painted them and then nailed them to the drawers and doors with my brad nail gun. After puttying the nail holes I then did a final thin coat of paint. I was able to find knobs that matched the door knob on the bathroom door perfectly. 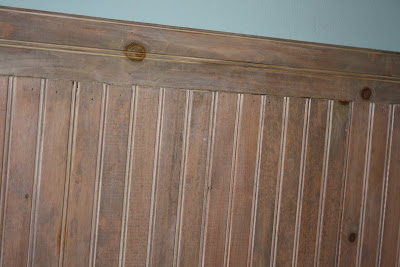 The next thing I tackled was the wainscoting. I liked the beachy feel of the white wash but the rest of the wood in my house (furniture, floors) are dark woods and after a while it started to bother me that it didn't match. Since it would have been super messy to sand it and nearly impossible to get all the groves anyway, I decided to use Gel Stain. It is a really thick oil based stain and you can apply it over other stains. I know a lot of people who have used it to reface their kitchen cabinets. I used a foam brush to put it on. I LOVE foam brushes! I use them for everything. You don't get lines from bristles and you can throw them away when you are done since they are so cheap. 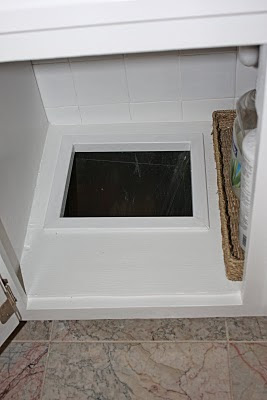 Growing up we had a laundry chute. I have always wanted one. So one day I decided to cut a hole under my sink. I went layer by layer to be careful that I wasn't cutting a pipe or anything electrical. Older homes are full of surprises! I was lucky and was able to cut right through. I then took the measurements and called a local meta shop. I asked them to make me a square tube. It cost about $30.00 for them to make it for me but was well worth it. I made the hole small so children wouldn't go through it. If I had made the chute myself out of wood, the clothes would probably get stuck. With metal, they slide right down. I covered the rough edges of the hole with plywood and a little trim and then painted it white.

Here are the AFTER pictures of the sink cuboard and the wainscoting. 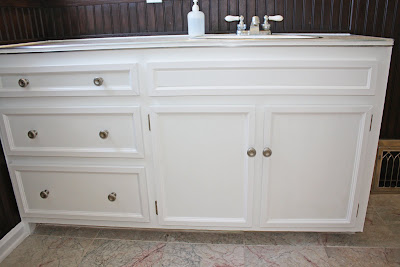 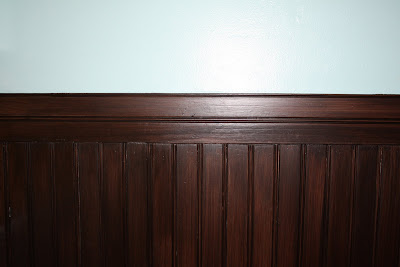 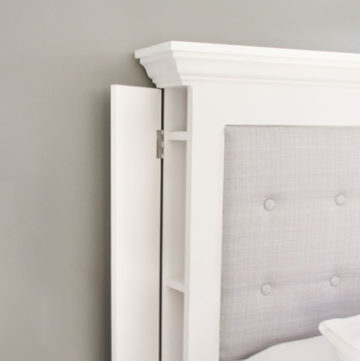