I first tried coconut milk cream when I was challenged by a friend to eat paleo for a month. It was hard and I missed cheese terribly! But I did like some of the things that went along with the diet. I have tried to limit the amount of animal based fats and to eat more plant based fats.

I found out about whipped coconut milk when I was browsing Pinterest and I saw a picture of a can of coconut milk with the caption saying it could be whipped just like half and half to make whipped cream. The image led to a spam site so I googeld it. I found the site Chocolate Covered Katie with  the instructions.

I have been making the chocolate version and just eating it as is for a long time now. But the other night I wanted it to feel like more of a dessert so I added a cookie crust. Then when my mom came knocking with 2 flats of strawberries this week, I started making strawberry everything. So a strawberry version was born. 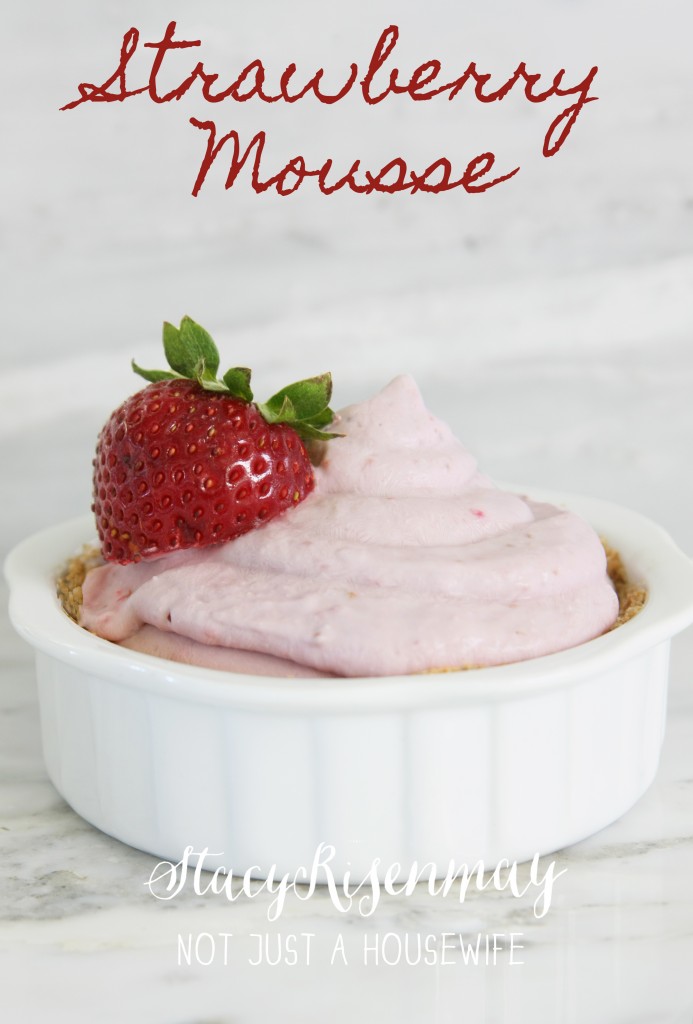 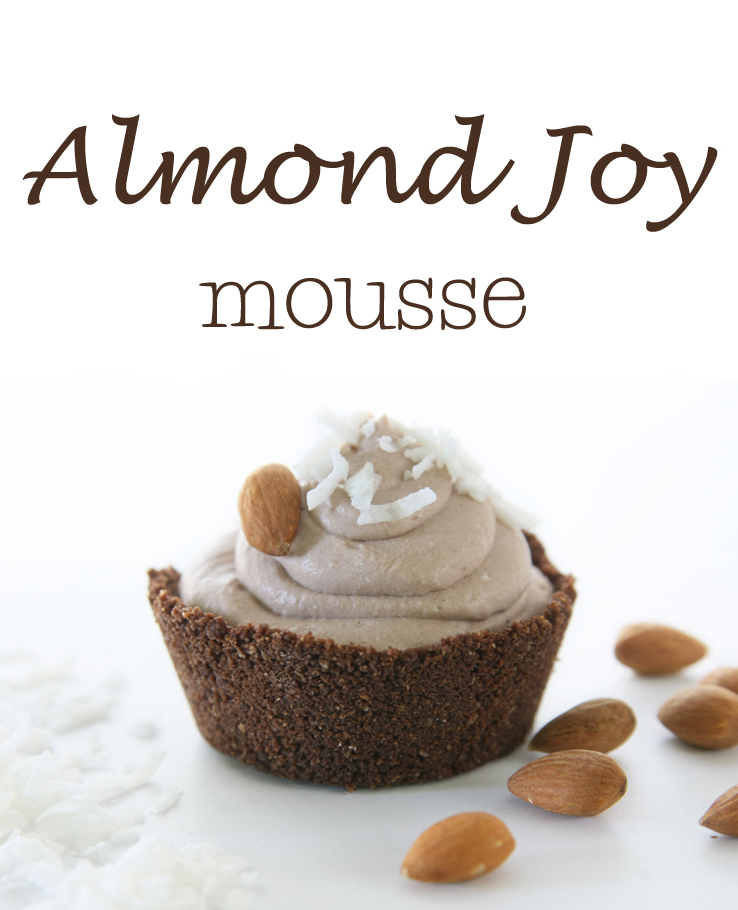 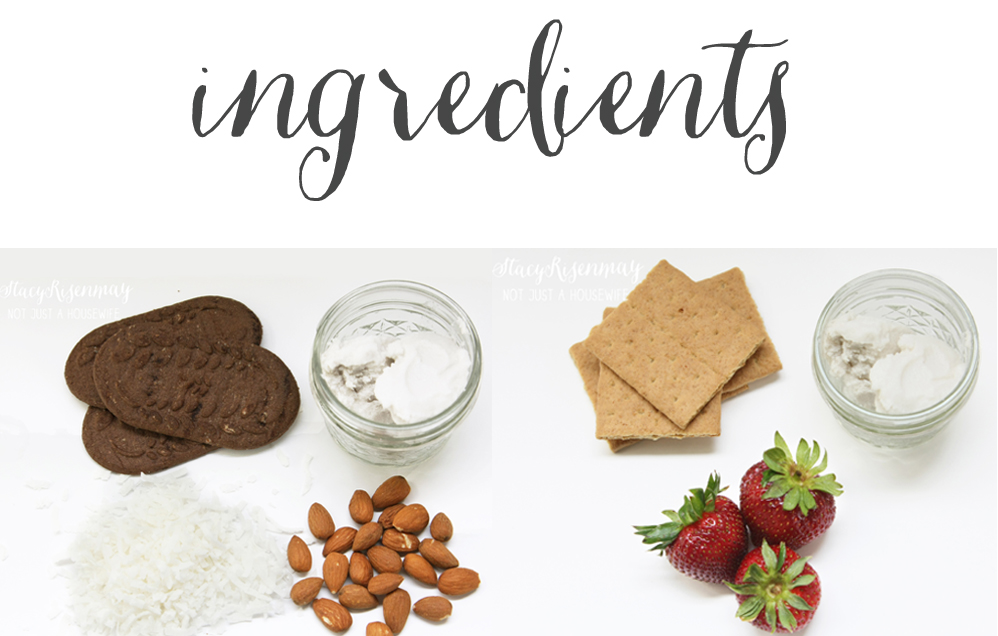 ** *This could easily be made into a gluten free dessert by using gluten free crackers/cookies.

I put the crackers in zip lock baggies, close them up after letting the air out of them, and then crush them with a rolling pin. I roll them until they are fine crumbs. 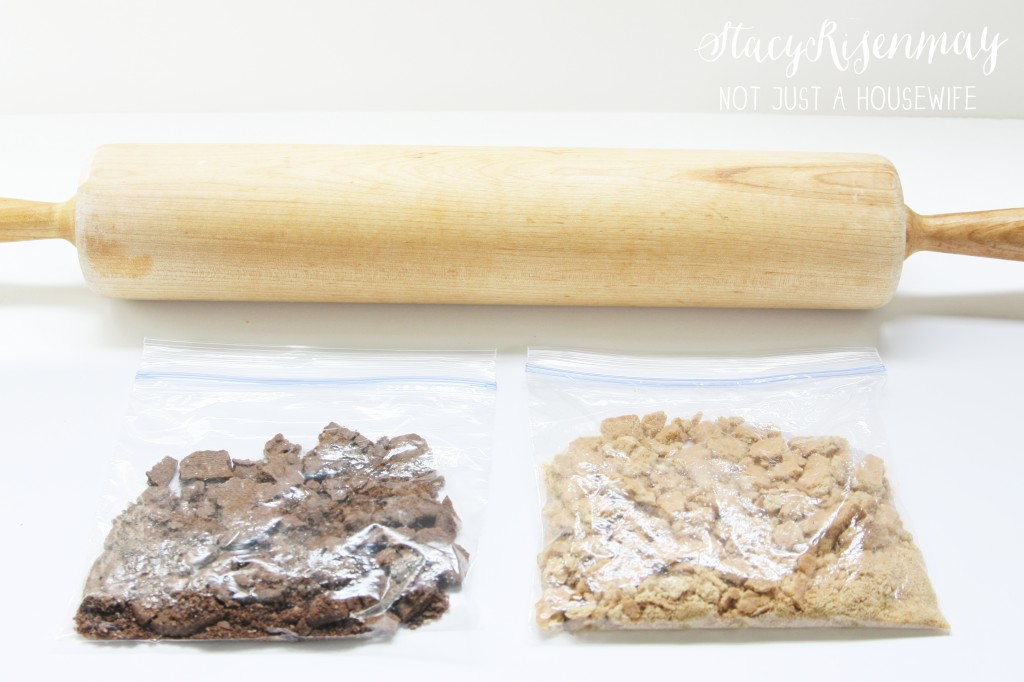 Then I put them in a bowl and add the coconut oil. It is your basic graham cracker crust but without the sugar and substituting oil for butter. I mix it until it has a consistent texture. 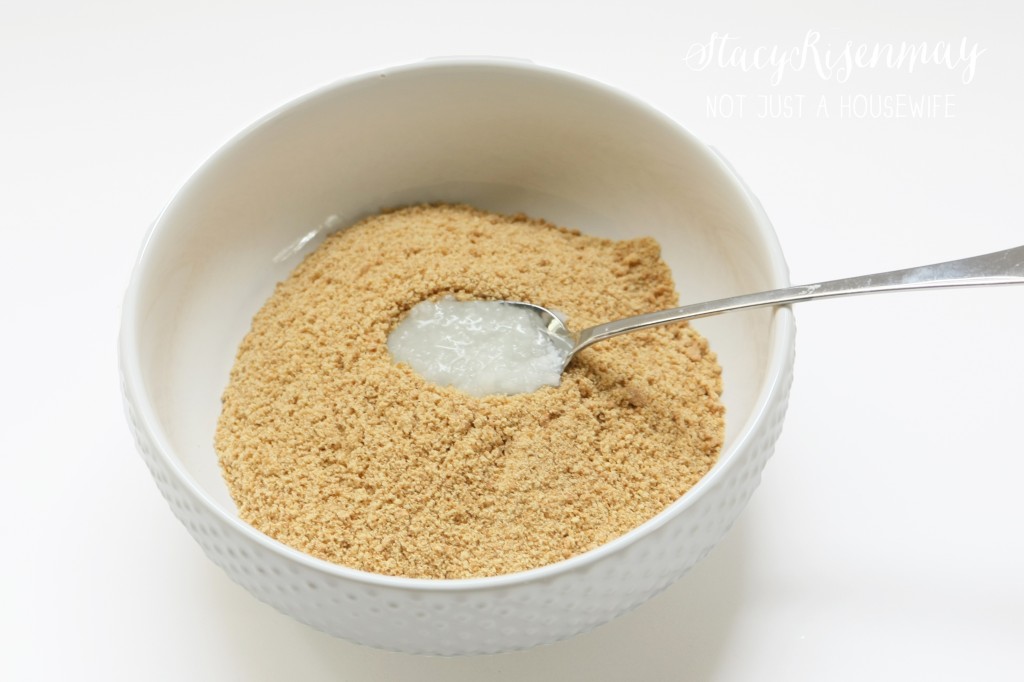 Press it into whatever dishes you are going to use. I used 4 ramekins I normally use for crème brûlée.  For the chocolate (since I only have 4 ramekins) I used a muffin pan. I had to freeze them in order to get them to come out of the pan. It made 6 since muffins are smaller in size than a ramekin. I don't recommend it. It was hard to get them out so if you have dishes, that would be better. And small bowl or dish would work. 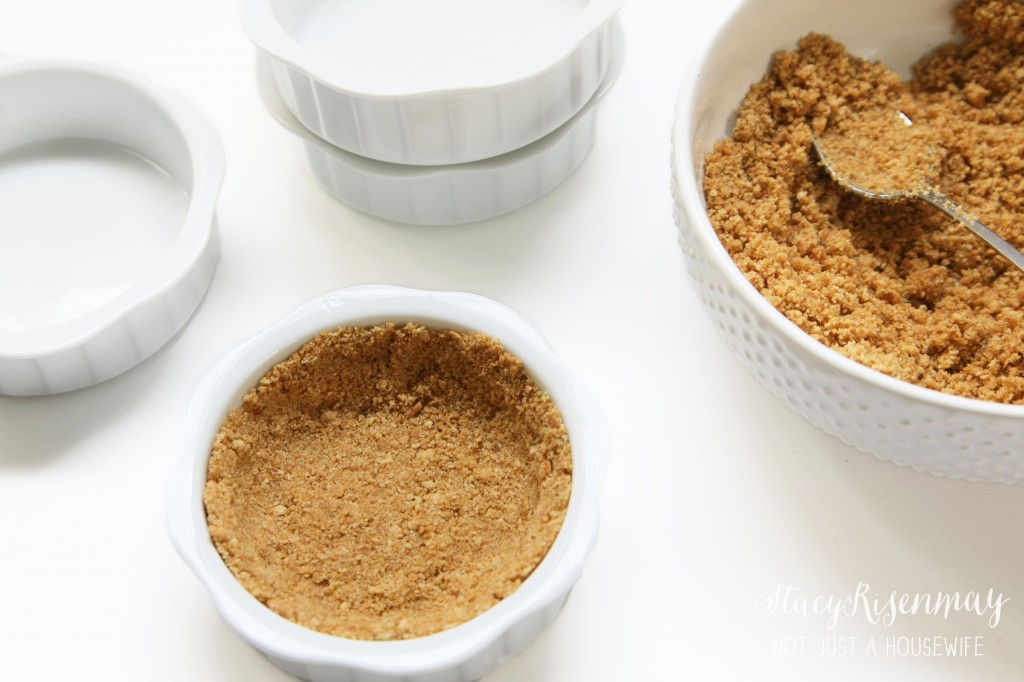 I buy Thai Kitchen coconut milk. I have heard you can buy straight coconut cream. I am going to keep my eye out for that. But  a can of coconut milk totally works. First you put it in the fridge. I let it stay in there all day. In fact I store them there after I buy them so they are always ready. When the milk gets cold, the cream separates and rises to the top. It also hardens. When you open the can you can scoop out the cream and put it in the bowl. Most of the time it is about half of the can that is cream but sometimes it is less and sometimes it is more. I always do 2 cans unless both are less than half and then I open a third. 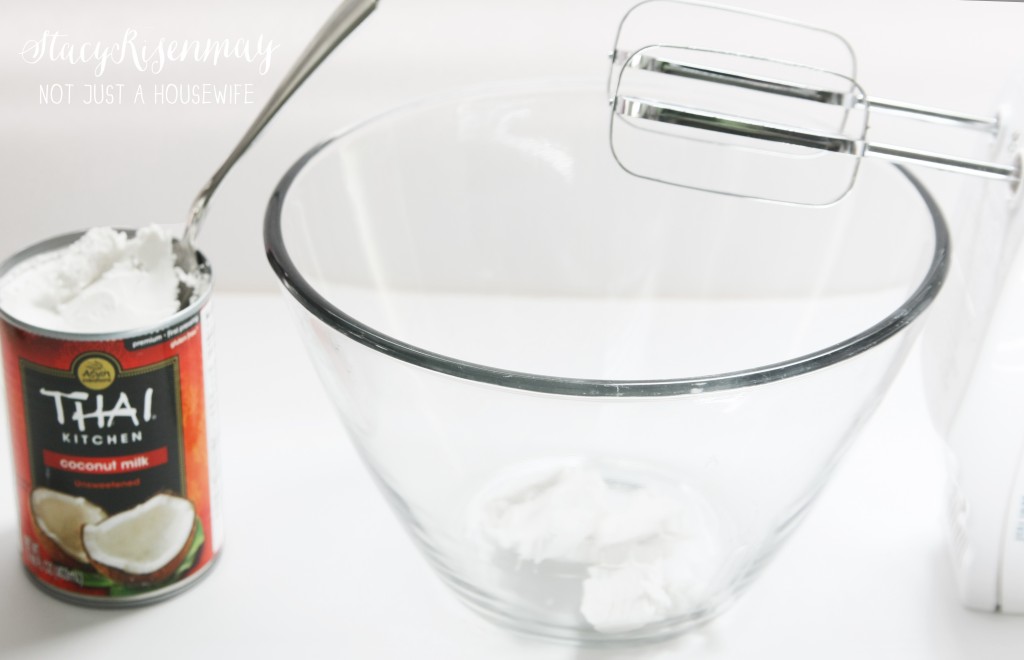 Start out on a slow setting and begin beating them. It will take awhile just like with real whipping cream. I wait until it is thick and fluffy before adding the other ingredients.

The strawberry will be a bit thinner since you are adding a liquid to the cream. But I just pop it into the fridge and it gets thicker. I actually do that for the chocolate too. 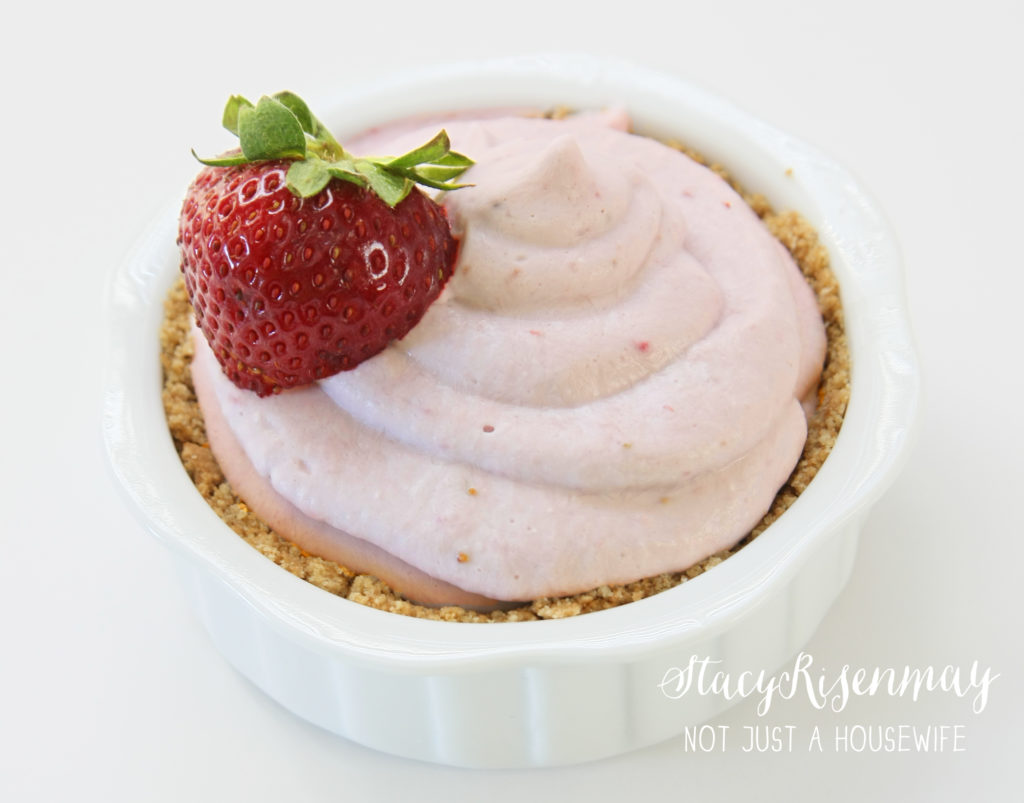 When you are ready to serve, pull them out of the fridge and top them with a fresh strawberry or the coconut and an almond! 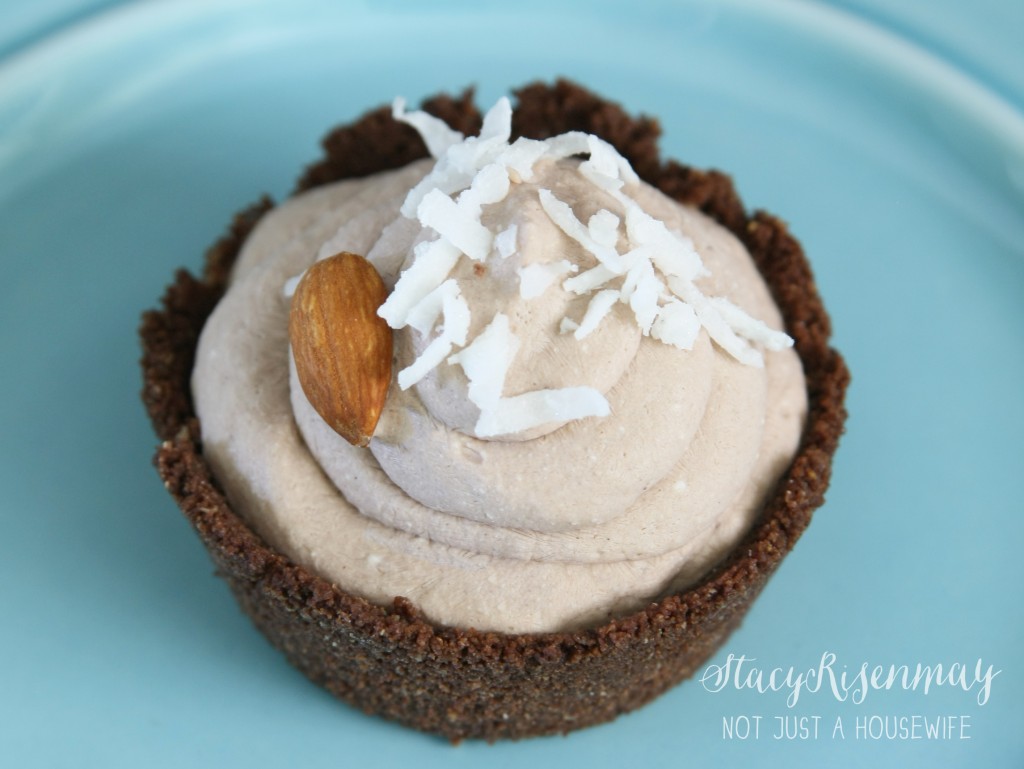